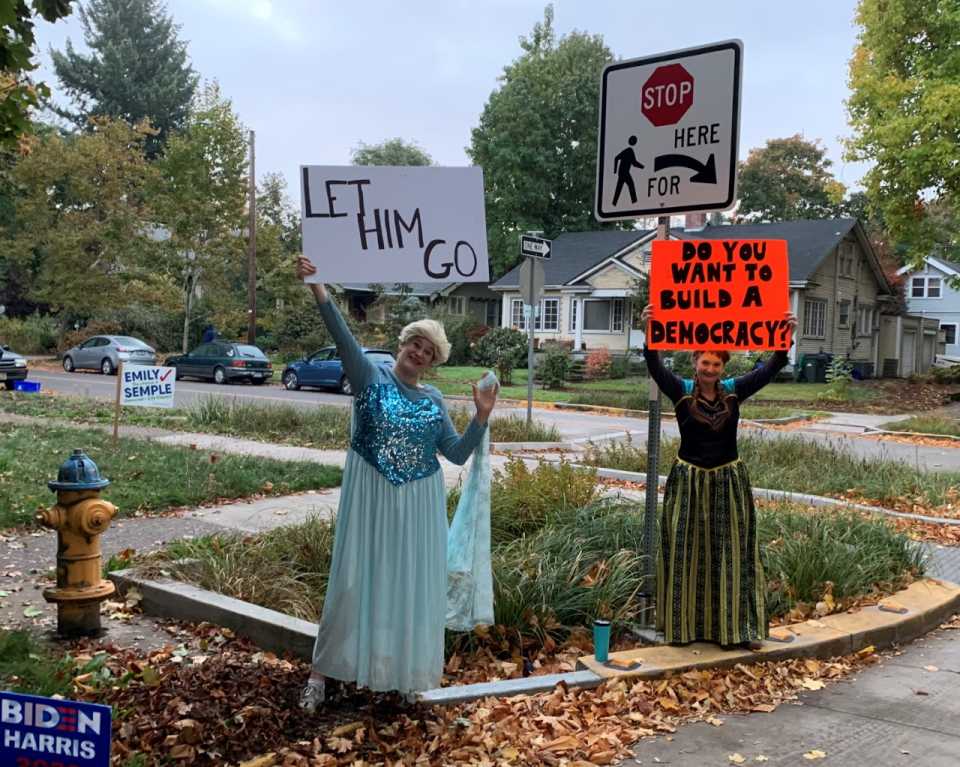 On the Friday before Election Day, I shivered on the side of a busy street in Eugene, Oregon wearing a costume from the Disney film Frozen and holding a giant orange sign that read “Do You Want to Build a Democracy?” My friend Debbie positioned herself six feet away from me dressed as Elsa from the movie, resplendent in a blue sequined gown and a blond braided wig. Her sign read “Let Him Go.”

We stood inches away from trucks and cars barreling down the one-way street, and I reflected on the numerous ways I might die—a member of the opposing party might run me over, claiming low visibility at 7:30 AM, or one of our region’s numerous Proud Boys might aim a shotgun at my head. It’s been a long time since I’ve put myself directly in the path of fear; it felt uncomfortable, exhilarating, terrifying.

I used to be politically active. Right out of high school, I registered Democrats to vote, standing in front of grocery stores in Los Angeles with a clipboard full of registration cards. I canvased for my university’s environmental clubs. And then I went to graduate school and got a full time job and a husband and a kid and restricted my activism to the occasional Women’s March and Black Lives Matter protest.

This year, however, there’s too much at stake. I’ve written a hundred postcards and mailed them to anonymous voters in different states. I’ve put political signs in my yard and dressed the yellow plastic “slow-down guy” in front of my house in a homemade Biden/Harris t-shirt with a flag that reads “VOTE!” None of it is enough to combat the hate and fear and prejudice I’ve observed in my area of the world. And so when Debbie texted to ask me if I’d like to join her in a little pre-election cosplay, I jumped at the chance.

My grandmother owned a costume shop in Monterey for 40 years, sewing and renting out her creations. My siblings and I grew up in Chewbacca fur and Egyptian togas and pioneer hoopskirts. Our mother kept a barrel full of “dress-up clothes” in her living room. When she lost custody of us in the early 80s after she came out and divorced my father, we dressed up every other weekend when the court allowed us to visit her, and she and her girlfriend took us out in costume to IHOP.

Dress-up has always been a part of my life. When I moved to Eugene twenty years ago, I immediately volunteered to stand in a full-sized raccoon suit and teach environmental education to school kids. Standing in a Frozen costume alongside early-morning commuter traffic shouldn’t have scared me, but it did.

Political demonstration, even just a few years ago, felt like fun. With Debbie and our other friends and my daughter, we dressed in pink knit hats for the Women’s March and pinned on political buttons and walked—laughing and singing—from our courthouse to the park blocks downtown. I never felt threatened. Some of the people watching from the sidelines and from the tops of parking garages didn’t agree with our agenda. But I never felt as though our lives were in danger just for marching on the street in silly hats bedecked with cat ears.

One of these men stopped in front of Debbie and me as we stood in costume with our signs Friday morning.

He’d already driven by once, she told me, and now he was back. He idled in the intersection a few feet away from us, and my stomach clenched with fear. I can drop my sign and run, I thought. At the very least, I could put on the mask tucked into my embroidered bodice in case he hopped out of his car and began to yell in my face.

Instead, I looked into his eyes, and I smiled.

The Buddhist teacher Jack Kornfield calls this a noble practice—this habit of looking into people’s eyes to see the “Buddha within.” I tried, that morning, to see what united this man and me. He was handsome, my age, calm and thoughtful and quietly enraged. I wondered what I represented to him in my absurd red-braided wig and my striped satin dress trailing across the leaf-littered grass.

In some way, did I and everything I stand for frighten him?

Taking a political position, publicly, requires courage—especially in the midst of pandemic, when we’re already afraid for our lives. I think of the brave people from all parties making their phone calls, canvassing, rallying, working in polling places and post offices and wherever it is that ballots get counted. Voting’s a serious business.

Still, I’d like to think there’s room for playful political activism. I’d like to believe that both sides can tolerate a little levity, some clever signage, a bit of creative cosplay. And so, despite my fear, I’ll go out again with Debbie on Monday morning, and once more on Election Day because she’s got costumes from Winnie the Pooh and Alice in Wonderland and, as she notes, “three different ways that we can dress like a chicken.”

With so much at stake, we’ll stand in an even more public place in the cold autumn morning with our signs. We’ll urge people to vote, and hopefully inspire some of them to laugh in the process. My heart may palpitate beneath my Tigger costume; I may want to kick up the striped booties that cover my sneakers and run. But I’ll make myself stay. I’ll hold my sign high, look into people’s eyes, and smile.

Melissa Hart is Contributing Editor at The Writer Magazine. Her essays have appeared in The Washington Post, The Los Angeles Times, The Rumpus, The Boston Globe, The Chicago Tribune, and elsewhere. She is the author of five books, most recently Better with Books: 500 Diverse Books to Ignite Empathy in Tweens and Teens. She teaches in the MFA Program at Southern New Hampshire University.