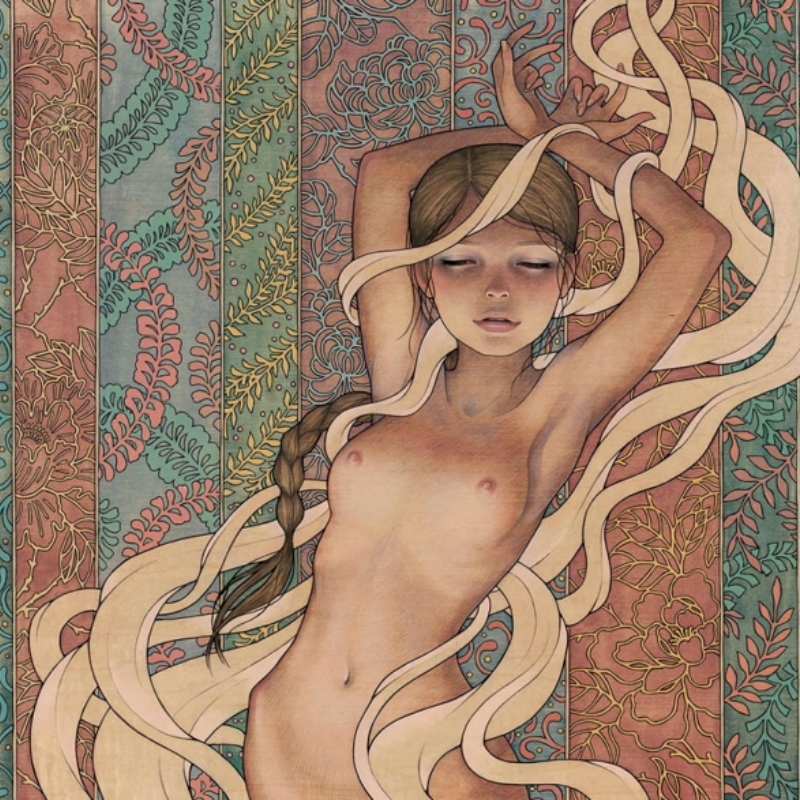 “Lovesongs,” oil and graphite on wood, by Audrey Kawasaki, 2011. Used with permission.

After making the one hundred mile drive with my daughter for the Breast MRI appointment, she takes off to meet an old friend who is a medical student at the hospital. “Oh, no, is this going to be a Grey’s Anatomy booty call?” She ignores me and takes off to have way more fun than I will during my 90-minute appointment. She gets a booty call. I get a booby call. I’m already feeling like a curmudgeon about this MRI.

I’ve been coming to this clinic for years. They know my high-risk history. I was there two weeks ago for a mammogram. I’m not a stranger. They have my medical records in their hands, yet, just as someone is squeezing my breast for a mammogram or injecting me with the dye for the MRI, they always ask: “Who in your family has had breast cancer?”

Seriously, you don’t know? And when they ask the age of my mother when she first learned that she had breast cancer, and I say 30, they always shake their heads, cluck a bit, and sigh. When I report my sister is now cancer-free, they seem a bit more relieved. “Ooh, aunts and cousins too. You’re lucky you haven’t had a biopsy.” I feel like they’re going to say yet, but they control themselves.

Standing there with my breasts flopping, we could talk about anything. I’d be game to discuss hairballs, toothpaste, bad cheese, or Brad Pitt (not Angelina Jolie).  I don’t want to talk about my long list of relatives who’ve had breast cancer. Shirtless, I want to walk down the hallway, sagging breasts flopping merrily as I leave their clinic. “I don’t need to be here,” I imagine myself saying as my parting words.

Instead, I get to shove my breasts down a couple of holes, and am warned not to move or I’ll have to do the MRI all over again. This technician doesn’t even ask me what music I want to hear. She just shoves the large headphones on and walks away. I have to ask her for the plastic ball to squeeze. “Just in case I feel claustrophobic.”

She shakes her head no. “You’re a pro at this. You’ve been coming here, since,” she looks at the report, the report that lists all those relatives also, “since 2006. Wow, sometimes twice in a year.” She hands me the ball and shakes her head again.

No, I won’t be claustrophobic? No, don’t you dare squeeze that ball.

Why do I bother informing them that I am claustrophobic?

“It will only be twelve minutes of actual screening before I return with the dye.”

Only? Twelve minutes of listening to the pneumatic drill. What about all the minutes before getting the scan positioned correctly? How do those minutes count?

I resign myself to the MRI and immediately find myself in panic mode. I am over-reacting. I know this, but can’t calm myself. She doesn’t turn on any music. She looks like a country western person. What if she’s Christian rock? I want to squeeze the ball, but don’t want to face any more time here. I can feel my heart beating rapidly. I’ve done this before, I can do it again. I am being an asshole. I think of assholes at work to distract myself. Thinking of them depresses me. This is not a good time to suffer from depression.

My heart continues beating way too fast. Maybe I’m having a heart attack. I can’t think about my heart. Instead I think of a lover who named his dick Harry. The scan begins and the loud noise starts to comfort me in an oddly unnatural way. It’s so loud I can’t think of my poor heart pounding rapidly against the machine. I wonder why men are so stupid as to give their dicks names. Dickhead is the perfect word to describe these men. I can’t imagine naming my vagina Sally. Sally’s horny. Sally’s sweating. Sally’s lonely. Sally doesn’t miss Harry.

A cancer thought happens. I don’t want to think about losing my hair. In the past, I’ve made these weird deals with myself that I won’t color my hair again if I lose it to chemo. Once it grows back, that’s it. The chemo, ragged grey. No more henna.

I don’t want to think those fucked-up cancer thoughts. I’m an optimist. Albeit a grumpy one. Overly happy optimistic people piss me off. Everything is pissing me off in this damn machine.

I think about my daughter being on a booty call. I miss being young.  In this depressing hole, I’m supposed to think, but at least I’m alive. At least it’s not called the Cancer Clinic. Or is it? Maybe I’ve been coming here for years and just thinking it’s called Breast Clinic. Maybe it’s Breast Cancer Clinic. How do I overlook these crucial details?

My heart. I must quit thinking these thoughts.

When I told my daughter how much this MRI would cost me, she said not to do it. “We could fly to a beach for that money.”

Yes, a beach would be a much more useful way to spend money than sitting in this damn MRI. Siting on a beach or in the MRI? What is wrong with me? I have choices. No, I’m guilted into taking this precautionary MRI. Again and again and again. “If we catch it early, you’ll be so much better off, “ the radiologist said after recommending this MRI.

They’re so upbeat in this joint.

A few weeks ago they had their bright pink ribbon Christmas tree standing in the office. One year I was there while someone put the tree up. A pink ribbon tree in the Breast Clinic. Isn’t that a bit much?  I felt more and more depressed with each pink ribbon ornament she placed on the tree. We don’t want to think about cancer while we are in the hospital for our appointment with the Breast Clinic. Humor us. How about a glass of holiday sparkly while we are waiting to see the doctor? How about an upbeat tree with no awareness message? Can’t we have a normal tree like normal people? I would never be a friend with anyone who had a pink ribbon Christmas tree set up in her house.

I was defensive with the radiologist after the second round of mammograms and the ultrasound in one month, and had said it seemed a bit unnecessary to have the MRI since both sets of mammograms and the ultrasound had all been deemed benign, nothing suspicious. “It’s what we may be missing,” he said, leaning over me while I sat there in the dressing room, basically unclothed.

The noise stops and the technician arrives to inject the dye.

“The headphones are driving me crazy.”

I regret eating that large slice of olive pizza at Whole Foods right before this appointment.  My head is supposed to be shoved facedown in this foam pad, as if I’m having a massage, but my nose has to be free for air or I believe I can’t breathe and I will start to panic. Why can’t I be more normal? At least I don’t have a pink ribbon Christmas tree. I wonder what would happen if I puked down that hole designed for my resting face. I wonder how many people have barfed doing a breast MRI. Wonder if some people are so panicky that they have someone sitting in this radiation room, screaming assuring shit at them while the scan takes place.

And then it’s over.

My daughter is punctual. Her face is flushed. She’s had a much better ninety minutes than me.

At least I’m alive, I think. The Breast Clinic has warped me.

Screw that perverse thinking. I want a booty call.

Diane Payne is the author of Burning Tulips, Freedom’s Just Another Word, and A New Kind of Music. Her work has appeared in Word Riot, The Christian Science Monitor, and hundreds of other literary journals. She is the MFA Director at University of Arkansas-Monticello.