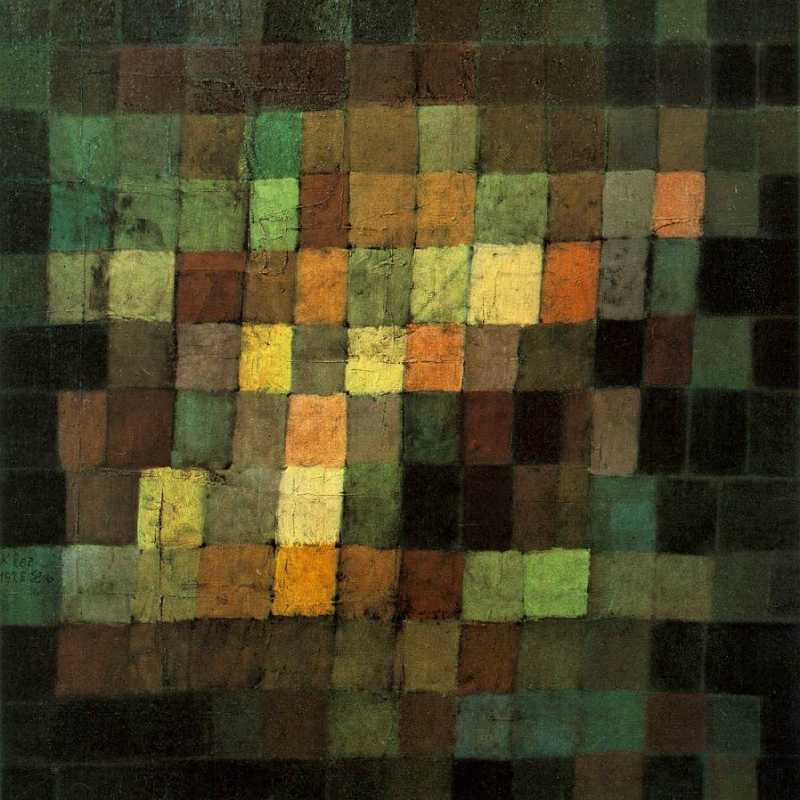 An oil by my grandfather-in-law-to-be,
a saw mill owner and amateur painter
whose taste in English landscapes was transplanted
to a Mesoamerican garden by way
of Madras, rests in the light of mid-morning.
Its two figures, inexperienced in
pastoral romance, are poised on the bank of
a lake doing nothing—not even touching—
beneath a shambling sycamore, the gentle,
distant bellies of lumber-colored hills
across pale water, adrift in an idea
of the right place to fall in love so pure that
nothing even casts a shadow anywhere.
No genius or menace, just the idea that
the world changes when two people fall in love . . .

Les Fleurs du Mal festoon the baskets of a
market on the edge of town from which these two
have walked away, chess pieces and coins and glasses
of anise clinking on the sidewalk tables,
musicians not on the street but asleep in
the belfries, dogs trotting from the cemetery
to the fountain in the square and back again.

The flowers are everywhere, pungent and bright.
It could be autumn, eighteen-fifty-seven.

The tables will have filled up by late afternoon.
Chess: from Sanskrit, chatrang, meaning “four members,”
a florid phrase for the army. Years ago
when at night I reconstructed great games
from notations, the companionship the
chess board offers seemed ultimate and tragic—
pitiless, calculating, menacing, hard,
provisional—and among the luminaries
of its Hobbesian constellations, Paul
Morphy, a boyish Southern lawyer, grabbed my
fascinated longing like a broken
arrowhead of drifting geese. The Opera
House match against a duke and a count where he
sacrificed knight, bishop, rook and queen to win
in seventeen moves. His defeat, as a nine-
year-old, of General Winfield Scott, who spent the
evening in New Orleans on his way to
spearhead the group of Lone Star
patriots towards Veracruz. Playing eight games
at once in the Café de la Régence, a
ten-hour exhibition, winning six and
drawing two, never removing his blindfold.

In middle age, obsessed with proving he had
been cheated of his father’s fortune, scared of
being poisoned, Morphy died a bachelor in
his tub. Still his game against Louis Paulsen
in the first U.S. championship of eighteen-
fifty-seven was a life’s perfection, of a sort—
the four knights’ opening setting up two pawn
bunkers and a melee in the center through
which the gift of his queen sacrifice
flashed like the razorblade before the credits of
Un Chien Andalou.

I lie beneath this painting trying to finish
the last chapter of a book first laid aside
when its chronicle reached the year I was born:
crude oil crisis, night bombing of a dam in
Vietnam, mortar across Gaza and in
the Golan Heights, Chinese intellectuals
dispossessed and set to the plow, apartheid,
détente, LSD, the birth of Bangladesh.
Darkness has passed across the painted lake and
a storm has settled over the opposing
hills, soundless explosions of light bathing their
slopes and the broad field of water, isolating
the two silhouettes. Their daylit counterparts
seek shelter under an unseen sycamore
until the next remote illumination
interrupts this game of adjusting the world
with a glimpse of its indifferent expanse.
The flashes define them. They are each alone.
The plea of Morphy’s play was to decreate
this isolation. Sacrifices and blindfolds—
each loss recuperated, undone,
redressed by the alluvial dazzle of thought—
the outrageous interruptions quieted,
the safety of the king hoarded in his heart.

Brian Glaser is an assistant professor of English at Chapman University. His work has appeared in the North American Review, Ploughshares, Ecozon@, and other journals.