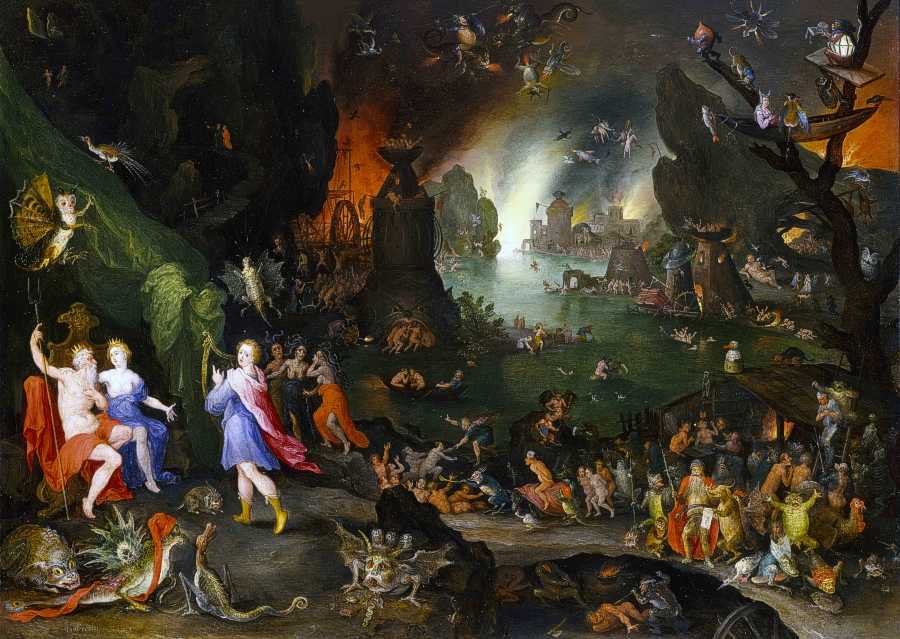 “Orpheus in the Underworld,” oil on copper, by Jan Brueghel the Elder, 1594.

by Kathleen Rooney
Down

This day could use the excitement of receiving a surprise package. Even better if that package reads THIS SIDE UP.

Don’t tell me to take this frown and turn it upside down; it’s my frown and I can do what I want.

I went to high school in Downers Grove, founded in 1832 by Pierce Downer. I have zero knowledge of his temperament, but I hope that his surname becoming an eponym cheered him.

Would you find it odd if I asked you to sit down and talk about the existence of God? It would serve me well to know the meaning of hell. I will tell you, “Wow, that’s so deep.” And you will say, “Let me break it down.”

Astrologers down the ages have lain down on the ground to study a patch of sky from below, their lore passed down by word of mouth.

You look ravishing, darling, with your hair down like that.

D.W. Griffith was racist and a mess as a director, but I watched all two hours and 27 minutes of Way Down East just to gaze at Lillian Gish and Richard Barthlemess.

A neutral adverb, “down” gets placed in a lot of masculine contexts: gridiron football and its countless dull downs. He downed that whole six-pack like an enemy aircraft. Okay, you’re a man, we get it, settle down.

A massive dude parks his blue pickup truck on the corner, radio blaring a country station. I want to yell out the window, “Hey buddy, turn it down!” But I’m afraid he’d gun me down.

Riding high from her sleeper hit Mean Girls, Lindsay Lohan was the host of Saturday Night Live the night Rachel Dratch premiered the character Debbie Downer. From the heights of fame the only place to go is down.

Hey babe, while you’re up, can you pull down the shade? While you’re at it, can you burn down the patriarchy?

The minor third interval of the Sad Trombone consists of four descending notes. A plunger mute helps, because a soupçon of comedy is the quintessence of failure.

Thinking about down comforters really brings the ducks down.

The emotional impact of the statement “the system is down” hinges entirely upon the system in question.

Death can be such a lofty concept that it helps to bring it down to earth, like: how many miles of toilet paper will I have used in my lifetime?

It’s getting down to the wire for the human race. But there’s always time to get down on the dance floor.

I’ll drink to that—down the hatch.

The Little Engine that Could began as a sermon. I haven’t read it in a while. Does it hold up? Is it any good? Can we agree that optimism and hard work have their limits?

I cannot even with America right now.

Growing up in rural Nebraska, one of seven kids in a family that couldn’t afford a piano, my dad played the accordion. His favorite piece was Jacques Offenbach’s “Can-Can.” I can picture him—rambunctious, bumptious—cantering around, booming the tune until his own dad cantankerously told him to can it.

That canny physical and metaphysical resonance whenever I say, “Can you open this can?”

Keep that up and you’re going to get canned. But maybe getting canned is not the worst that can happen.

“I-think-I-can-I-think-I-can”—I’m a capitalist subject, so of course I’m meant to think that.

A can of peaches, a can of ability. Can you really eat that whole can of beans?

To conclude her can-can, La Goulue bent over and tossed her skirts over her back to reveal the heart embroidered upon the seat of her underwear. This move came to be known as “the derrière.”

Almost nothing actually comes in a tin can. You probably mean aluminum.

He locked himself in the can and refused to come out. I hope that the cops never throw you in the can.

My high school speech team mentor Melissa got me a coffee mug that said If you can believe it, you can achieve it. She bought it from a shop in the mall called Successories. Commodity fetishism at its suburban peak, but in my head, I started telling myself stories about winning anyway. Then guess what? I did.

Physically or mentally able, indicative of possibility. Maybe every elected official needs a kick in the can.

Rapturous, sublime, and over in 2 minutes and 11 seconds’ time, here’s hoping they play “Can-Can” at the end of the world. Can you imagine?

Rain again. Does that rhyme when you say it?

Luke Howard taxonomized in his “Essay of the Modifications of Clouds”: cirro-form from Latin for curl of hair, cumulo for pile, strato for layer, and nimbo for rain. Goethe, beset with an almost painful admiration, popularized these classifications in a poem: “My winged song thanks / the man who distinguished cloud from cloud.”

I bless the rains down in Africa—I love that stupid song.

Acid rain corrodes my dreams like statues. Rain of terror in an era of global weirding.

Clouds cover 2/3 of the planet at any moment, but as the Earth warms these clouds become scarcer. Fewer surfaces reflecting the sun back to space means the Earth gets even warmer, which leads to even fewer clouds. Tufts brushed aside like cotton from a bottle.

Thunder gallops across the sky, but the earth remains dry. My kingdom for some rain!

A reign usually lasts until the monarch dies. Will humans abdicate? Will we be deposed? The monarch butterflies are dying.

Maybe if we wrest the reins of government from corporations? Maybe if we give free rein to our imaginations? We must keep a tight rein on spending, we’re told.

Each plasma cell in the sun is about the size of Texas. Useless to know, perhaps, but morbidly fun.

In The Merchant of Venice, Portia says, “The quality of mercy is not strained; / It droppeth as the gentle rain from heaven / Upon the place beneath. It is twice blessed; / It blesseth him that gives and him that takes.” We’ve taken too much. It’s too late to correct our mistakes.

The golden sun, a timepiece overhead, counting us down.

A glissando of rain gives way to the pecking beaks of pizzicato violins. The soundtrack indicates the nearing of the end.

I don’t even know anymore.

Kathleen Rooney is a founding editor of Rose Metal Press, a nonprofit publisher of literary work in hybrid genres, as well as a founding member of Poems While You Wait. Her most recent books include the novel Lillian Boxfish Takes a Walk (St. Martin’s Press, 2017) and The Listening Room: A Novel of Georgette and Loulou Magritte (Spork Press, 2018). Her World War I novel Cher Ami and Major Whittlesey was published by Penguin in August, and her criticism appears in The New York Times Magazine, The Poetry Foundation website, The Chicago Tribune, The Brooklyn Rail, The Los Angeles Review of Books, and elsewhere. She lives in Chicago.