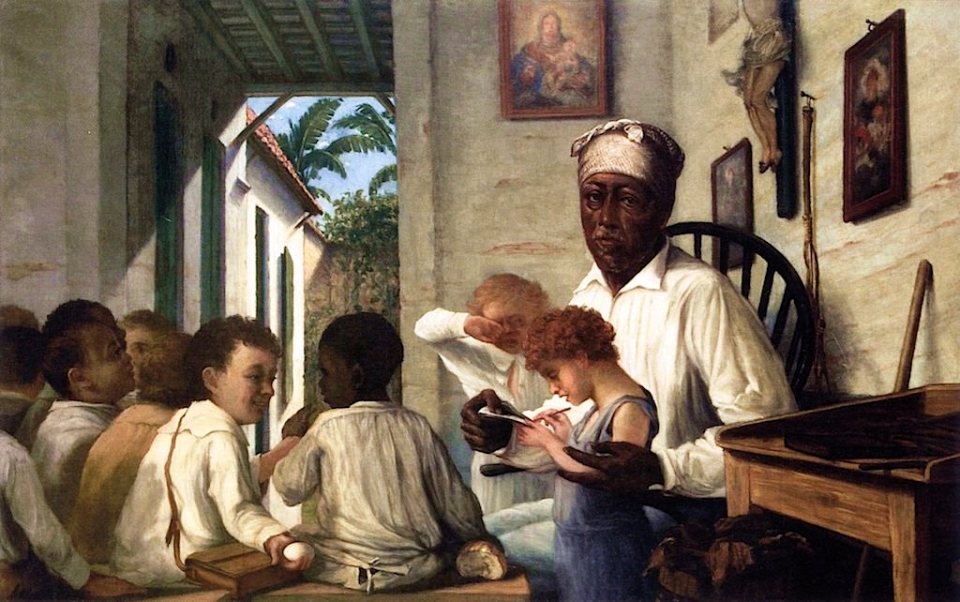 Recently my husband and I celebrated our wedding anniversary, spending the day at the Vizcaya Museum and Gardens, originally a palatial Miami home built in 1916 by industrialist John Deering. It was lovely to walk the immense grounds, admire the European art, relax in the gardens, pretend that we were Deering’s guests in 1920 and would soon go in to have a gin and tonic. That illusion was ruptured when I went into the restroom and found a huge sign on the wall, a sign aimed at victims of rape and sexual abuse. The poster contained at least ten phone numbers where the suicidal and the desperate could get help.  It’s a reminder of the army of faceless and nameless servants that were required to make this mansion happen, not to mention the wage slaves toiling to provide the cash outlay in Deering’s factories up north.

This is Ana Lydia Vega’s territory, the space between the romanticized and the sordid, the power monger and the underclass keeping him in command, the colonialist and the enslaved. She is the poet of the gender wars between the master and his wife, his mistress, and the mammy that cares for his child.

Vega lives in this space herself. She was born in 1946 in Santurce, Puerto Rico. Her mother was a schoolteacher and her best childhood friend was French, influencing Vega to pursue her university degrees (including a Ph.D.) at the University of Provence.  She taught French literature and Caribbean studies at the University of Puerto Rico, Rio Piedras, retiring when she became successful as an author. In Puerto Rico she has been awarded the Premio Casa de las Américas (1981) and the Premio Juan Rulfo (1982).

How is it possible that a writer so well known in Puerto Rico is almost unknown in the United States? She is, after all, an American citizen, and therefore, an American writer. She wrote her first eighteen novels in English—novels that she considers unworthy of seeing the light of day.

Vega’s fiction is as complex and contradictory as Puerto Rico itself. Puerto Rico is an archipelago that until 1898 was a colony of Spain. African slaves were shipped over to work in the sugarcane plantations, and weren’t freed until 1873; even then slaves were required to work for their masters for three more years. Puerto Rico became a U.S possession in 1898 and Puerto Ricans were granted U.S. citizenship in 1917, meaning they could be conscripted into the U.S. military forces but not necessarily vote for the U.S. President or even their own governor. A constitution was ratified in 1952, making Puerto Rico a commonwealth. This move weakened the movements for independence as well as the case for statehood—according to a 2012 referendum, the will of the majority of Puerto Ricans lacking political autonomy must now await the good graces of Congress.

The only way to survive such a political situation is with humor, and Ana Lydia Vega’s most impressive stories use parody and satire to deliver knockout punches. Her humor can be found in the form of contemporary and sci-fi narratives, ghost stories, and literary homages to Charlotte Brönte.  Sadly, few of her works have been translated into English and her catalog, whether in English or Spanish, is now out of print.

Translation for her first collection of short stories, Virgenes y Mártires (a collection of thirteen short stories, six of them by Carmen Lugo Filippi and one co-authored by Vega and Filippi), may be impossible. It is written in a combination of Spanish and English that, for Vega, represents not just Puerto Rico’s enforced bilingualism, but the resistance—even by those living in Puerto Rican ghettos in New York—to English. The title of one story, “Pollito Chicken,” harkens back to a song Puerto Rican children learn in school: “Pollito chicken/ Gallina hen/ Lápiz pencil/ Y pluma pen/ Maestra teacher . . .” The story is about a young Puerto Rican woman living in New York who goes to Puerto Rico on vacation, seduced by the American advertising that represents the island as a place of sensual idylls, even though she grew up there and knows better. A typical passage shows Susie poolside, ignoring someone hitting on her in order to read a bestseller about a woman being subjected to sexual voodoo rites:

This first collection of stories explores some of the themes that will recur in Vega’s work: the space (or lack of it) for female agency in the machista Puerto Rican culture, itself in thrall to U.S. colonialism. Her next book, published in 1982, was Encancaranublado y otros cuentos de naufragio (my translation: Socked in by Fog and Other Stories of Shipwreck). As with the rest of her catalog, in English or Spanish, this collection is out of print and difficult to find, despite being one of Vega’s most famous works and winning First Prize in the Casa de las Américas. Fernando Valerio-Holguín writes that Vega uses the “postcolonial encounter to reflect on the cultural identities of the Caribbean” when “Cuban, Haitian and Dominican balseros (boat people) reach the shores of the United States or are intercepted at sea, [and] have their first encounters with the North American Coast Guard or immigration officials. “

So rare is Vega’s writing that it was impossible to locate a copy of Vega’s third book, Pasión de historias y otras historias de pasión (1987), even though it won the Juan Rulfo International Prize in 1984. Also unobtainable was the 1988 collection of her essays, El Tramo Ancla,  originally published as newspaper columns.

Though locating Vega’s work is difficult, the resulting finds shed light on her continued exploration of theme. Her children’s book, Celita y el Mangle Zapatero, in which Celita, a little Puerto Rican girl from New York who is spending the summer with her grandfather in Puerto Rico, hears the story of the slave boy Pablo, who escapes from his plantation only to be cut in half by a plantation foreman’s machete. The god Ogun has pity on him and turns him into a walking mangrove tree, so that with other mangroves he can continue his dreamed-of journey across the ocean and eventually back to Africa.

True and False Romances: Macho Latin Meets his Match, is a collection of Vega’s short stories and one novella translated into English. These stories run the gamut of genres starting from the satirical “Aerobics for love:”

“Which evokes from Him the nostalgic recollection of his younger days as a male hustler on the beach in the Condado . . . Which in turn brings to Her the now-fading memory of the experimental lessons in lesbianism she had so kindly given—a special introductory offer, one time only—to her ex-sister-in-law the day after her divorce.”

On the other end of the spectrum, “Deliverance from Evil” is a story in which the ghost of a woman murdered by her lover possesses Violeta, a young medium who needs the spirit’s strength to escape from her own abusive relationship.  She discovers the spirit is more controlling than her husband ever was.

Although the volume’s subtitle intimated the stories would focus on the battle of the sexes, Puerto Rican style, in fact every story is permeated with the effects of Puerto Rico’s anomalous political status, a land typical in many ways of the Caribbean experience and yet unique in so many others.

One of my favorites is the sci-fi short entitled “Solutions, Inc.” about a corporation run entirely by women, which regenerates, readjusts or neutralizes male spouses failing to meet their potential. “Neutralizing” includes “the ultimate solution” which, as the Corrector-General (something like a vice-president) proudly informs the unseen Patroness (the president), has only had to happen five times. Case number 6000 is particularly challenging: the husband is the ideal. He “shares the household chores, is a good provider, is responsible, serious, sweet, attentive, polite, affectionate, faithful, and efficient in the functions pertaining to his sex, and that no other defect or flaw may be detected in him except his total and absolute perfection.” The wife is bored. Solutions, Inc. tries to dissolve the marriage by having the wife indulge in a series of escalating misbehaviors, from poor housekeeping to blatant infidelity, but the husband is patient, tolerant, and kind, and nothing shakes him or his perfect love.

Finally, the truth is revealed: the Patroness is said ideal husband, who solves the issue by having the ultimate solution applied to the wife, the case erased, and the case number reassigned. The casual way in which the whole conflict is resolved—simply wiping out the players—is Vega’s analogy for the Puerto Rican experience. Here we see the power of a lone male at the top of an apparent feminist organization operating under a cartoonish Neanderthal code.

Vega’s novella “El baúl de Miss Florence: Fragmentos para un novelón romántico,” (“Miss Florence’s Trunk”) is also available in the collection, Masterworks of Latin American Short Fiction: Eight Novellas. Master Charlie is the son of a French plantation owner in Puerto Rico and his wife, daughter of industrialist and inventor Samuel Morse.  Miss Florence travels to Puerto Rico to educate the over-indulged but under-parented child. She has a chance at romance with a French doctor also working on the island but she is in love with her boss, even though she witnesses him consorting with slaves and emotionally abusing his wife. The bars of the wife’s golden cage are compared to the position of the mistress-slave, and to Miss Florence’s own position, but the real lightning rod of the story’s theme is Master Charlie. It is in him, and his fate, that the themes of the novella assert themselves: the social criticism, the strong sense of morality, the fight for individualism (a struggle shared by several characters). Classism and sexism lead to Charlie’s mother’s undoing, and finally, her death. Miss Florence’s Trunk is one of Vega’s most poetic works, with its focus on Miss Florence’s too slowly evolving sensitivities. In his introduction to the collection, Ilan Stavans writes “Vega has a strong interest in using memory as a laboratory to investigate Hispanic idiosyncrasy and has strived to find in her work ways to abandon the cartoonish legacy of magical realism. [Writers of Vega’s generation] are still akin to lo fantastico, but enjoy pop culture and like satire and farce to tone their imagination.”

These are the three graces that dominate the work of Ana Lydia Vega: scintillating political clarity, an ability to imbue parody with meaning, and sharp sense of satire that punctures the “cartoonish legacy” of magical realism. Guides like Vega help us navigate the fogged-in waters of Caribbean, Latin American, and American relations in the 21st century.

Alison McMahan’s historical mystery novel The Saffron Crocus won the Rosemary Award for Best YA Historical in 2014 and the Florida Writers Association’s Royal Palm Literary Award in 2015. Her short work has appeared in various anthologies and has been nominated twice for Derringer Awards. She is represented by Gina Panettieri of Talcott Notch Literary.