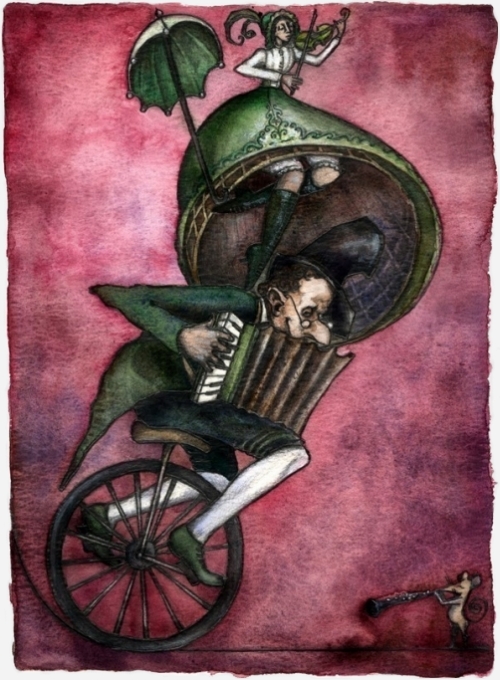 Afternoons, the girls play in the hollow. The heat buckles their energy and sweat drips into their eyes. Their mother works hard, but the girls are unkempt and secretive, given to a layered, sarcastic wit.

Their mother bakes olive bread and cinnamon rolls. She is never cross, but occasionally she has quiet days where she doesn’t speak to the girls. It is as if her head is wrapped in gauze with two holes for her eyes.

The school is two miles away and the girls walk. In this day and age! It is a matter of pride for the mother that the girls walk to school, rain or shine. “We can do anything,” she tells them. “There is nothing we can’t do!”

They live on the edge of town. There is a cornfield behind their house. When the wind blows, it is like the hands of many children clapping.

Their mother wears a device over her ear. It is a telephone. She walks around in public places, talking and gesturing, sometimes swearing. The girls are frightened because their mother looks like a crazy person. She will look at them and say, “What? What are you staring at?”

The woman at True Value Hardware has pigtails and a hunched, contemplative posture. She asks, “What is the nature of your problem?”

The girls spin and jump. The nature of their problem! They want to take the woman in the blue apron behind the doors with the sign that says “Authorized Personnel Only” and tell her everything. That their mother sits in the garage when she gets home and leaves the car running and she cranks 101.7 The Rock and closes the garage door. The girls are young, but they are not stupid. They run down the stairs and push the garage door opener. Their mother reclines in the driver’s seat. She sings along with her eyes closed. She doesn’t hear the garage door open. When the song is over, she opens her eyes and is annoyed. “Why are you up? Get back to bed.” But then she comes in and lets them pull off her shoes, she lets them put rainbow clips in her hair. She lets them watch Unsolved Mysteries until she falls asleep on the couch.

But their mother answers the woman, “My door has come off its hinges,” and she shows her the broken hinge, the stripped screws.

The mother has started a home business, selling her goods to local grocery stores. She puts on black polyester pants, kitten heels and a tailored blouse. She has frosted her hair. The girls do not like the way her bottom looks in the pants, like the thorax of an ant. They don’t like her striped hair.

She talks to suppliers on the phone. She needs plastic bags and paper trays for the cinnamon rolls. She needs only plastic bags for the olive bread. Both require labels. The mother has designed the labels herself, working late at night on her computer. She calls her products “Goodness Gracious,” which the girls think is dumb. Behind her back, they say, “Goodness gracious, this is awful!” and “Goodness gracious, I’m going to puke!”

The labels feature a smiling sun. The girls think they could draw a better one, but the mother says they don’t appreciate her primitive style. The mother thinks this is hilarious. They do not want the olive bread or the cinnamon rolls. They ask for Kraft macaroni and cheese. They want Kids’ Cuisine.

Their father has a new apartment he has furnished lavishly with Norwegian style furniture. The girls think it looks like a doctor’s office with the magazines fanned out on the coffee table. The rooms smell like toothpaste.

He takes them to the place he used to work. He paces around outside the building. They struggle to keep up. There are windows, but they can’t see inside. He turns and says, “Does anybody have to wee?”

He rushes them through the revolving door. The security guard puts up his hand. “You’ve been told,” he says. He’s a giant, taller and wider than their father.

“Hey, man, my daughters have to pee.” The security guard looks at the girls and shakes his head. “Sorry kids,” he says. Their father sits outside on a cement bench, smoking, while the girls chase each other around the topiary.

He drops them home and there’s soup in the crock pot, bubbling over. The floor is slick with flour. The girls sweep and wipe and eat from bowls on the back porch. They catapult navy beans into the grass. “Fine dining, fine dining!” they cry.

Later, they are woken by laughter. The girls tumble from their beds and look out the window. It is their mother, beyond the hollow on the edge of the cornfield in the blue night, her arms wild, waving down the moon.

Kathy Fish’s stories have appeared in Indiana Review, The Denver Quarterly, New South, Quick Fiction, Guernica, Slice, and elsewhere. She was the guest editor of Dzanc Books’ “Best of the Web 2010.” She is the author of three collections of short fiction including Together We Can Bury It, forthcoming from The Lit Pub.