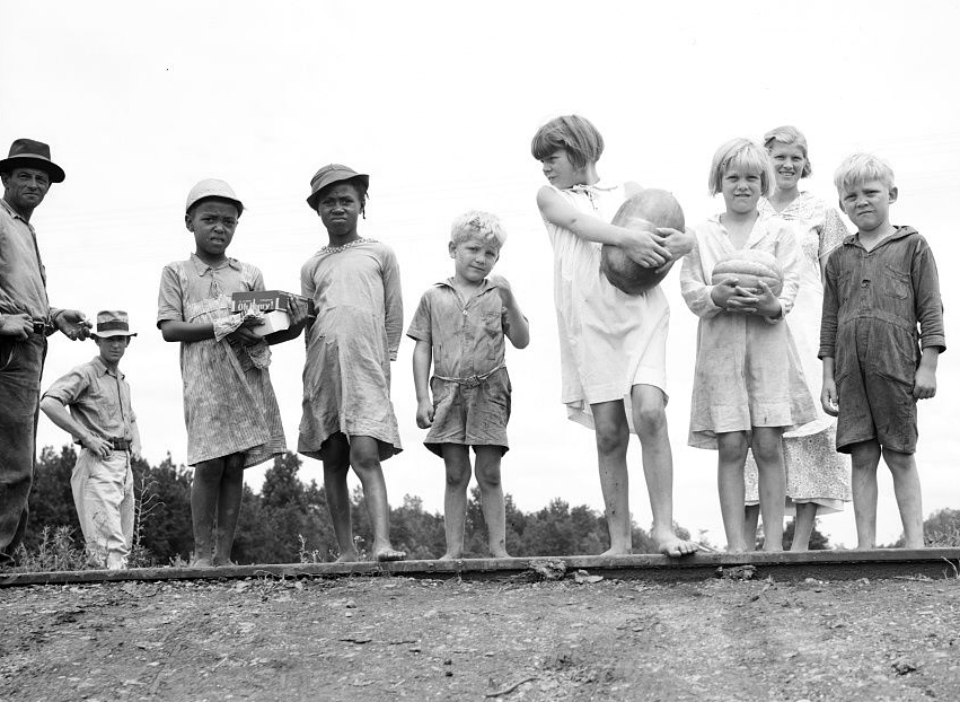 I Do
the deckhand

She hasn’t taken off her swimsuit all summer. She is two hands
across her middle. I know that from throwing her: one foot
on my thigh, the other in my palm. Up, over, splash.
Once, when she was four and I eight, she said, Your turn.
I never had anyone to throw me, daddy long gone.
The way she said it made me try, but my foot reached long
over her knee, another dock over water.
It is hard to give her away, even to my best friend.
Strange to see her in white.

Preacherman squints, the groom takes a handkerchief
to his brow. Only the front of her hair is pinned—
just cut, even at the ends like a pillow case on the August line.
She’ll have their laundry now to tend to, hum a song I never heard
anywhere else, clothespins in her pocket, one in her mouth.

Yesterday I said, “It will be quiet when you go. Can’t have no
boy best friend when you married.” Hush, it won’t.
You’ll hear other things like iris petals slitting north and south
like the river or red lantana reaching for a hummingbird.
River pays his wages and yours. I won’t be far.

Barrel-chested, I’d picked him for my friend
because I knew he was strong. I am quick, can hook again
and again without tiring, but my lank arm is better as a switch
than a blackout. Just as gold and skin makes a promise today,
this river may take you under, but you’d never be alone.
Water is never singular, can’t be cut. Life in a funnel
and heart’s unexpected twine.

The Leadsman Sings
the deckhand

How can I get home in time
when the river is a maze of reason I can’t measure?
We’re flat-bottomed today as a packing crate.
Pilot takes the soundings from me.
I take the line from the prow, lob, then draw it back.
Foam and blades. A boat is lost without her singer.

Before I left last week,
my son was pulling up on the chair.
Dried leaves, lint, scoot to crawl, his mouth a dustpan.
His momma’s hands, crazed, looking for everything.
She said, Give me a look-see. Get that out his damn mouth already.
She had his head back, her fingers too hard on his gums.
I said, “It’s okay. It’s just some paper.”

You don’t know. I could not shake it out, could not hit him hard.
My hand the whole size of his back. You, with nothing to remember.
He wasn’t buried the color I saw him turn.
I had watched the other boy, the one come before,
his box sinking in the mud, the choking done when I returned.

My work is the same as it was then. Carrying nail kegs
for the barge, loading up the long hill. The toiling line
shakes until the deck boss grunts for us to stop.

This boy came out with a head full of hair,
those who don’t know think he’s our first—the way we watch him.
But caution is not wonder.  He could be taken, easy.
She’s home making his first sweetcake, waiting on me. All I want
is to sing Happy Birthday to him for the first time. Nobody stuck,
no cargo ruining. Nothing sinking into mud on account of my song.

The Provider
the sharecropper as a young suitor

I was not immune to her charms. I knew how to work till and blade, turn over soil, reign in the muddied hoof, and start another row. The minerals ran down. What does a back do but hold sweat, keep it off my hands? A row can’t be made without tired. I asked Bankerman for a loan, shopped for another mule. Following the arc of sun each day—along taking in like newlyweds do, I had time to imagine us married after harvest’s earning, everyone knowing  my land was repaid in full. When I’d take my hat off, I could set my jaw sure to other men.

I was unworthy. She taught her four sisters to read and scratch their numbers. So much curiosity, more spoons of Why come, Sister? than oats and cream. She was sure with a ledger and the Word. When I went to ask her hand, a button on her left shoe was navy, the other three black. She saw me look and blushed. My want for her to know me, make me worth paying some tender. A body needed something that could hold it in return, use back.

I did not need to come back to hear her father’s No. Each seed was a stutter in dirt, each leaf blighted, a failure to flower. Small and weak. Easy to step on. I was taught repetition is Nature’s grace, something to accept. I met what was to be our land with the urgency of Not enough to provide for. The soil starved, acres of a ruination I did not know how to stave off. I just got ahead of myself, thinking how that thigh under her simple pleats must be freckled, the black hairs turned in the shape of scythes.

The last thing he said was out the Ford’s window:
he’d get me a coat in some fancy store up in Memphis.
A fool, I smiled at his smile—face a hard dirt,
a rivulet tracking it for a second.

Thirty-six hours coming and sure to cross out a crop year,
water axle deep. My husband, gone with his best friend,
said Jesse couldn’t go out by himself since fools
tend to start up mess when they see someone alone.

Gone 4-5-6-7 suppers.
Blink and there’ll be more people, more flood.
Brown boards in a moving brown ground.
This water’s like a heifer’s eye with its own bounty of will—
no power of reason. We have no money for a train, so I hold

Tillie’s small hand and her braid. She just turned six,
tall like me, long hair the color of twine.
Mama, you got my hand already.
Hands slip away in sweat. I won’t have that.

I tell her, “Your hair’s threaded around my knuckles.”
Like a hem? “Sort of but one that don’t ever let out.”
She’s looking down at wet and more wet.
Like when she loses a jack in the floorboard hole,

she’s best to get off her knees, not looking for what she used to have.
The cow’s rope is in my right hand: two ropes for what’s mine.
I say, “You just keep walking. Fix your eyes on the sky
where nothing else is going to bust.”

A fool, I think of my husband’s forearms as he heaved bales in our barn,
the smell of piled hay always stronger than animal.
He could pull this cow, easy, command her might
with his reins of field meat.

I asked Evelyn after Jesse yesterday. She said he was out
in the field and looked down, wasn’t chewing no fat.
I didn’t hold my breath for word of my man. A gumball lodged

in the arch of my foot, a seeded spoke that bruised but didn’t break
the skin. She said that I knew better, that trifling don’t change with time.
Her eyes were stones thrown at thunder, far from mine.
I couldn’t hear where they hit.

2 feet of water to walk. Tillie says, But we ain’t rabbit folk.
We don’t leave. I tell her, “This isn’t just rain but a whole levee
come down. Make your stride long like mine. We must wade
till we take to roof or tree. We can’t very well ride that damn cow.”

Mud in her eyelashes, the only thing I can sell
groans and doesn’t want to move anymore.
This water hurries against her flanks to push us harder.
I jerk her head 1-2-Come on-3-4 times, but they both just look at me.

I drop the one rope I can. It plunks
in the river like the sound of what can’t be, sinking into silt.
Tillie says what she has heard her whole life, her daddy’s words:
Wishes are just water on your brow, nothing and gone.

Poems and poetry reviews by Heather Dobbins have appeared in Beloit Poetry Journal, CutBank, Raleigh Review, The Southern Poetry Anthology, The Rumpus, and TriQuarterly, among others. Her debut poetry collection, In the Low Houses, was published in March 2014 by Kelsay Press.