Prophet of Furnaces and Dust 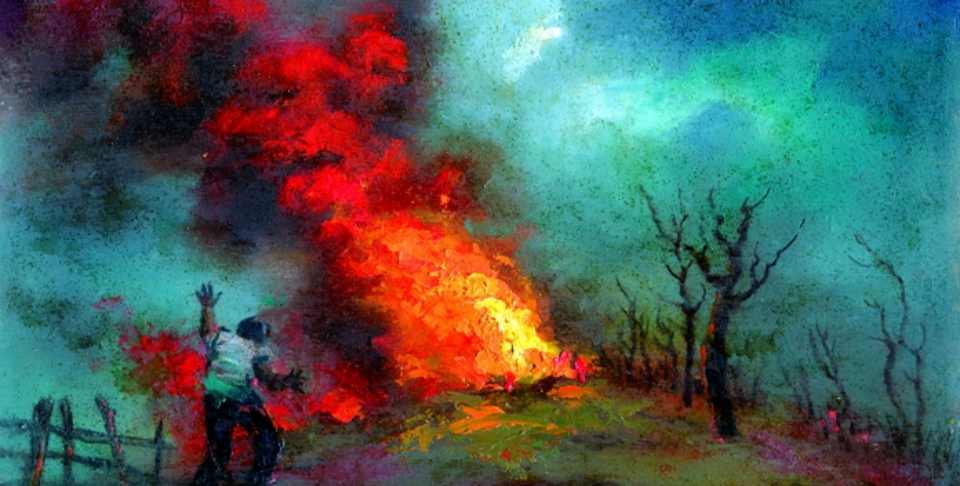 I saw a great many bones on the floor of the valley,
bones that were very dry. —Ezekiel 37

After Vietnam, he came home to fight
with the dust, went wild with the injustice,
waged war with everyone and lost. He cried
and drank himself raving mad each night,
but a revelation saved him, of Jesus
in a furnace room, drifting
above the dust, Jesus—and the meds
a Clarksburg doctor gave him. Mood adjusters,
which could dissolve his burnt-out eyes
into a sheepish grin.

An Old Testament
fury crackled in his face
when he guessed I was not only a Jew
but an atheist. Still, he treated me
with the utmost kindness.

He was Ezekiel—
we were the Captives of Babylon,
laboring all midnight shift
amid clouds of dried pitch, death itself,
shouldering plates of cold steel,
threading nuts large as a fist,
clattering them tight with an impact,
working so slowly, so slowly
every move became a deliberation,
because, as he revealed—“Look what this company
did to Bhopal. Don’t bust your ass for it.”

I accepted his revelations
but not his Lord, and he accepted that.

After so many layoffs, we were left
to walk in the shadow of furnaces
caked with snow, shattered ribs of concrete,
crumbling walls of refractory, warped crane rails,
buckets with iron jaws rusted shut,
a shambles of dead pigeons, feathers
packed with carbon, ancient temples half buried
in deserts of desiccated greed, revelations of dust.

I showered—
couldn’t wash off the dust.

Then I walked away,
leaving him in a valley of dry bones
that would rise and live.