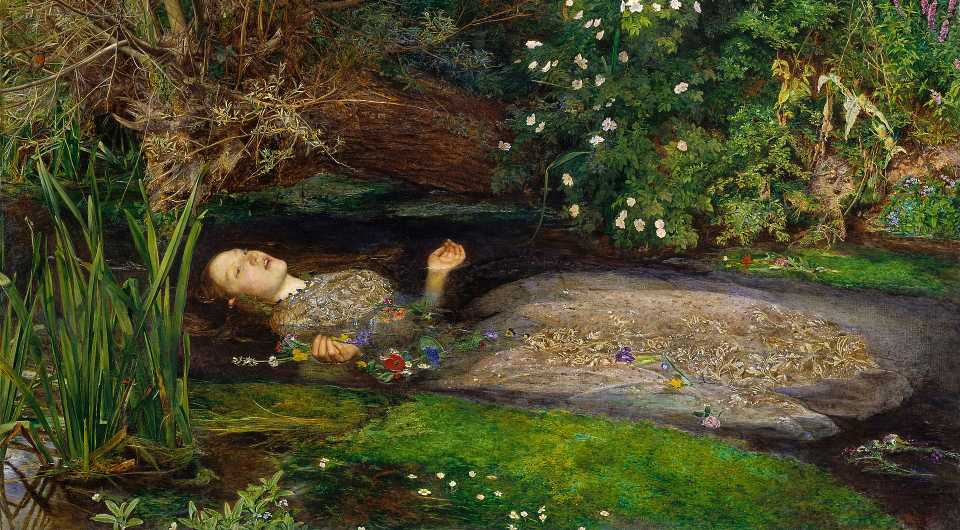 “Nymph, in thy orisons be all my sins remembr’d” has always seemed to me the most perfect pickup line, although it didn’t work so well on Ophelia. She is, of course, a little too achingly sweet to respond to its naughtiness with anything but a proper, little shutdown. Still, there is something generally wicked about the line that has always appealed, hinting as it does at so many, manifold meanings.

Sadly, my wish to be wooed as such was never gratified. The use of Shakespeare as an icebreaker has fallen by the wayside in the modern era, but the Shakespearean sonnet is still an omnibus for the love poem. E.E. Cummings, for example, used, and at the time some said abused, the sonnet form for his erotic and love poems. It’s amusing to think now that a mere poem could arouse such indignation, but Cummings’s poem “my girl’s tall with hard long eyes” was considered shocking in the 1920s. In fact, its 14 lines were so lascivious his editors worried about the poem’s inclusion in Cummings’s Collected Poems more than a decade later.

Cummings didn’t fight for the poem. Unlike other, more stubborn writers accused of obscenity, he was flexible. As he and his editor at Harcourt, Brace hammered out the contents of his collected works, Cummings claimed to care more about format than content. Eventually, the lawyers decided his poems would not invite obscenity charges—a real worry back then as everyone knows who’s read an account of D.H. Lawrence’s or Allen Ginsberg’s legal, literary troubles—and the poem, which would scarcely inspire an eyelash to bat nowadays, was included:

my girl’s tall with long hard eyes
as she stands,with her long hard hands keeping
silence on her dress,good for sleeping
is her long hard body filled with surprise
like a white shocking wire, when she smiles
a hard long smile it sometimes makes

Every generation has drawn a line of perception between pornography, what Lawrence called “the dirty little secret,” and eroticism. In the early part of the 20th century, what Cummings called his “poempictures” (which he also illustrated), fell on one side of that line while Lawrence’s prose fell on the other. Perhaps the two suffered different fates because Cummings’s language is more experimental, inspired by his studies of cubist painters, while Lawrence’s is more explicit. At any rate, in the eyes of the general public, Cummings isn’t remembered as particularly explicit while Lawrence’s name will still elicit sniggers.

Growing up, I didn’t like E.E. Cummings. Or rather, I never liked his political or satirical poems—the only ones we were permitted to read in school, gleaning from them something anti-socialist, anti-big government, although I was not able to articulate that at the time. There is a great deal of scorn for the New Deal in “anyone lived in a pretty how town” and “as freedom is a breakfast food.” Sadly Cummings, who always batted for the individual against the collective, in his later life (probably mistakenly) evolved to espouse the cause of Joseph McCarthy.

It wasn’t until I recently discovered the fierce individuality, passion, and humor in Cummings’s eroticism that I came to admire him as a poet. Try reciting “may i feel said he/ i’ll squeal said she” at a party some time. It’s a showstopper—more shocking than any garden-variety dirty joke. That is the exact power and privilege of poetry, to showcase the power of words, or rather, return a word’s individual power. A dirty joke won’t usually make people wriggle with embarrassment anymore, but the narrator of Cummings’s poem asking his ladylove to “cccome?” certainly might.

What is “dirty” or pornographic then? “I know it when I see it” goes a judge’s stern joke, but is the idea clearer or more obfuscated in our era where everything is permitted? In his essay “Pornography and Obscenity,” D.H. Lawrence begins with a very precise unraveling of the word’s etymology—“pertaining to harlots”—before launching into his disquisition on why sex itself is perceived as “doing dirt” (and usually “doing dirt” on a girl). Amusingly, Lawrence extends his definition of pornography to encompass what we would now call ‘romcoms.’ “There is a certain kind of sticky, universal pitch that I refuse to touch,” he says.

“This furtive, sneaking, cunning rubbing of an inflamed spot in the imagination is the very quick of modern pornography…so the cheap and popular modern love novel and love film flourishes and is even praised by moral guardians, because you get the sneaking thrill fumbling under all the purity of dainty underclothes, without one single gross word to let you know what is happening.”

To Lawrence, the attitude that certain women are pure and sexless is as dirty as others claimed his explicitly sexual writings to be. Furthermore, he posits obscenity is as simple as perceiving sex to be a dirty act. He even encompasses books like Jane Eyre and The Mill on the Floss in his accusation. In the former, poor Mr. Rochester has to suffer just for wanting to have a little roll in the hay with Jane: “Mr. Rochester’s sex passion is not ‘respectable’ till Mr. Rochester is burned, blinded, disfigured and reduced to helpless dependence…As soon as there is a sex excitement with a desire to spite the sexual feeling, to humiliate it and degrade it, the element of pornography enters.”

Pornography is that dirty, little secret Gordon-Levitt’s hero bumps up against “fatally self-preoccupied and incapable of either giving or taking.” And we all know what happens to the Hamlets and Ophelias when they are cut off from sex, unable to give or take.

(i do not know what it is about you that closes
and opens; only something in me understands
the voice of your eyes is deeper than the roses)
nobody, not even the rain,has such small hands

Such was Cummings’s singular sonnet tribute to his second wife, Anne Barton. There is an intimate knowledge in those words, sexier than anything more explicit could ever be. I can only imagine her secret thrill when, lucky girl, those lines were laid on her.

Isabella David is a French-American writer and artist. She obtained her B.A. in Comparative Literature from the University of Virginia. Her non-fiction, poems, and short stories have appeared, or are forthcoming, in Slippery Elm, Adbusters Magazine, Interrupt Mag, Contemporary Haibun Online, Every Day Poets, Every Day Fiction, and The First Line Literary Magazine, among others.