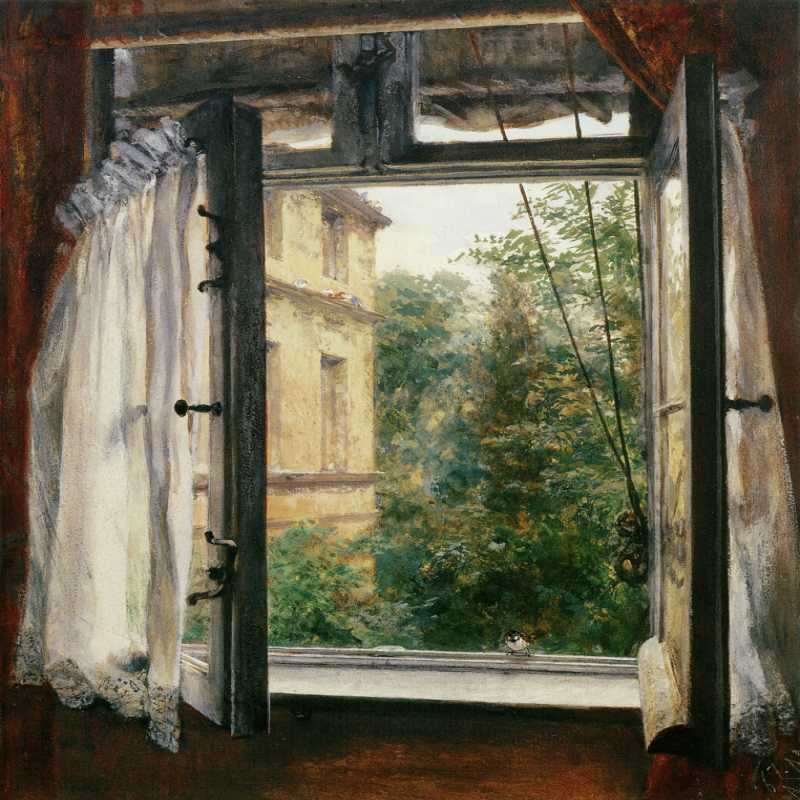 “View from a Window in Marienstrasse,” gouache on paper, by Adolph Menzel, 1867.

Sometime before dawn, my son climbs into my bed.

I touch the top of his head, feel him shiver. It’s almost summer, but a chill hangs in the air. We wear extra layers, pull old afghans out of drawers.

He falls back asleep without arguing.

I lie awake, admiring his shape, how someone so small can occupy so much space. In the dark, I sometimes forget my husband moved to Florida to live with another woman. By daylight, I always remember how young she is, how childless.

Over breakfast, my son rehashes his dreams: saxophones and scooters, water balloons, and pointed sticks. A bat flits in and out of every scene.

I ask him what he thinks the bat represents, what its presence suggests. I want to know if absence haunts him the same way it haunts me. He shrugs and says, “I see bats at night sometimes.” I don’t ask if he’s missing his father. I don’t tell him how bats make me think of intruders—someone or something that can force its way through the slightest opening.

My son wakes me the next morning as it’s getting light. He pushes his back into my ribs, cocoons the quilt around him. “He’s making noise.”

We’ve never had bats in this house, but I don’t know how to convince my son. “What if we learn about bats today?”

He nods and says, “He lives in the attic.”

I squeeze his hand. I doubt there’s a bat, but I can’t bring myself to step inside the attic that my husband never finished. He bought the paint and supplies, the drywall, the tools. I didn’t ask why he never made any progress. I never wondered why he spent so many hours up there alone.

My son points to a water stain on the ceiling and says it’s shaped like a bird or maybe a ghost. I drift off and dream of my husband, as if he never left, as if he’s hiding somewhere above us, waiting to drop back into our lives.

The next week, I invite a man inside our home. He stands in our front hall, but doesn’t fill the space the same way my husband did. His neck is the kind of thick that makes me step back. But he’s here to investigate the attic. I need him to prove there are no bats.

His name is Carl. I shake his thick hand and lead him through my bedroom into the walk-in closet, one side stripped of my husband’s shirts and shoes. Carl aims his flashlight toward the pull-down ladder, sending a faint beam into the dusty dark.

Carl returns to the hall, brushing filth from his shorts. “It’s definitely a bat,” he says.

I shake my head. No, I don’t wish to confront our intruder. No, I don’t want to see the untouched drywall and loose power tools, tucked into corners, taking up space.

My son grabs my hand and asks if Carl is going to kill the bat. I ask him how he knew it was a bat. He looks at the floor and rubs his elbow. “I see it at night sometimes,” he whispers.

I lift his shirt, search his skin for marks, the slightest puncture.

Before bed, my son and I talk about the bat and how it will live with us until fall. We will wait for it to move out, let it fly somewhere warm.

“Something like that.” I don’t tell him how much I hate Florida and the humidity that makes everything damp.

My son asks if the bat lives all alone up there. Carl only found one, but somehow one feels more intrusive than two, even more alarming than three. “Bats don’t just have one mate,” my son says. “They have many.”

While we wait for the bat to leave, we receive postcards from Florida, where it’s warmer and permanently damp. Where my husband lives in a beachy one-bedroom apartment and won’t pick up the phone. All summer my son composes letters to his father. He writes and writes but never asks for a stamp.

By fall, I toss all the silhouetted palm trees into the trash. Once we’re sure the bat is gone, I clear out the attic. I drive to the dump.

Carl returns to mend the damaged vent. He hammers fresh trim into place, and slides wire mesh through the gaps, filling larger holes with smaller ones. He circles the property, searching for additional points of entry.

I stand in the door frame, taking up space. “Go around again,” I tell him. Carl will walk the perimeter of the house until I am certain there are no more holes, no more cracks. Until he seals every opening.

Abbie Barker is a creative writing instructor living with her husband and two kids in New Hampshire. Her flash fiction has appeared in The Cincinnati Review, Berkeley Fiction Review, Hobart, Monkeybicycle, Superstition Review, and elsewhere. Read more of her work at abbiebarker.com.