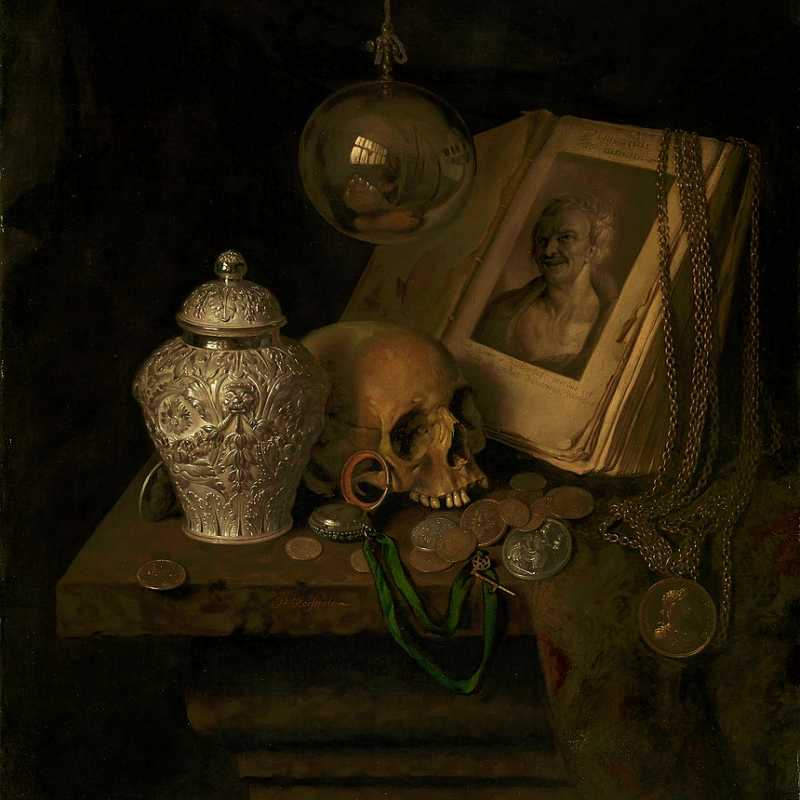 Scavenged lectern, 2012
Wood, dirt, brass
This piece, rescued from the side alley of a brownstone on 117th street in New York City, was carried by hand on a commuter train 30 miles north to the village of Sleepy Knoll. It was then lugged a quarter mile on foot and delivered to the front porch of a woman who had once off-handedly expressed the desire for a standing desk. When the recipient arrived home from work the night of her 35th birthday, it is reported, she was frightened by the silhouette of the lectern, having mistaken it for an upright raccoon. Two weeks after the wobbly item was delivered, it was again among bags of trash. Some say it stands to this day in the garage of Sleepy Knoll’s Municipal Department, occasionally displaying a box of baked goods.

Inscribed compact disc, 1999
Polycarbonate plastic, indelible marker
Liz Phair was a U.S. singer of some repute in 1991, when the recipient of this Grand Gesture attended a concert, in San Francisco, California. At the time of receipt, some years later, the victim was pregnant with her second child, who herself would one day take the stage as a singer. The gift represents an apology by a husband for what appears to have been some sort of financial transgression. Papers do not reveal details, but experts believe the misstep to have been significant. The CD displays a pointed plea, in the celebrity’s hand. Scholars consider this work exceptional in the category, due to its alarming specificity and the collaboration of one who could reasonably be considered a “rock star.” This Grand Gesture was accepted with some degree of humiliation but was clearly valued, as it was preserved by the recipient in the sturdy Ziploc material common to the era.

Homemade “Don’t” flag, 2005
Acrylic spray paint on pima cotton
Though liberals in the mid-90s were adamantly pro-choice, there existed within this population a discernible discomfort regarding elective abortion for women in committed relationships. Many progressive middle-class marrieds who already had children, even those facing a high risk of divorce and/or severe financial insecurity (see previous work), were expected to soldier on with unplanned pregnancies, falling back on the refrain, “What’s one more?” This cloth flag highlights an urging from an unemployed husband to his wife of seven years, when she became unexpectedly pregnant soon after the birth of their second child. Financial struggles (recorded) made the wife’s choice understandable if not without pain. She headed to the doctor to terminate the pregnancy medically. It is unconfirmed but said that the husband chased the wife to the subway in the Brooklyn borough of New York City, descended to the far-facing platform and opened this bedsheet-flag the width of his outstretched, up-raised arms. The flag read, simply, “DON’T.” It is widely believed that the couple divorced three years later.

Carved sidewalk square, 1983
Concrete, water, forefinger
Lincoln Center, a cluster of midcentury buildings providing a home for the arts on Manhattan’s Upper West Side, was designed by iconic architect Eero Saarinen in the mid 1950s.  It remains a hub of dance, classical music, theater, and film today, although recent events indicate a high probability of mixed-use zoning in the very near future. This concrete sidewalk square, poured in the summer of 1983, sat between Avery Fisher Hall (now David Geffen Hall, and originally Philharmonic Hall) and Columbus Avenue, which serves as eastern perimeter for the complex. Under cover of night, it was crudely carved with two sets of initials joined with a plus sign, in the traditional manner. The next day, it was revealed to the recipient, a dancer of adult age who, according to letters and diaries, walked on the opposite side of Columbus Avenue ever after.

Rough-hewn urn with ashes, 2017
Clay, glaze, human remains
Crafted in Taos by a ceramic artist who specializes in primitive renderings of desert animals, this coiled pot (plus contents) is arguably the most important work in the collection. It’s a fine study in humble presentation and long-lead commitment. The recipient—a woman in her late 40s, according to most estimates—lived alone. Scholars believe, based on strong evidence, that she had received two padded envelopes from a bereft former lover in the year prior. This item arrived in a small Amazon box two days before Christmas. Whether planned or coincidental, proximity to the holiday (plus the familiarity of the box’s logo) normalized the package, heightening its ultimate impact. “Unboxing” (to use the parlance of the time) was not witnessed. However, it is safe to assume that upon breaking the seal, the recipient would have seen a layer of silver tissue paper—another signifier of ordinary holiday goods. She would most likely have lifted the small covered pot out of the packaging. At this point, we must lean into conjecture. Either the recipient removed the coarsely fitted lid, peered inside, and saw a fair quantity of gray ash against the pale glazed interior of the vessel, or she found the note nested in the hollow of tissue paper left by the pot. The note was written in shaky felt-tip pen, most likely by a left-handed female:

“In my brother’s letter, he said this should go to you.”

Employing every classic device in the Grand Gesture toolkit—surprise, understatement, third-party participation, slow reveal—this work is a stellar model for students of the form. A major posthumous achievement.

Danielle Claro is a writer and editor. Her work has appeared in Real Simple, McSweeney’s, Domino, and many other magazines.