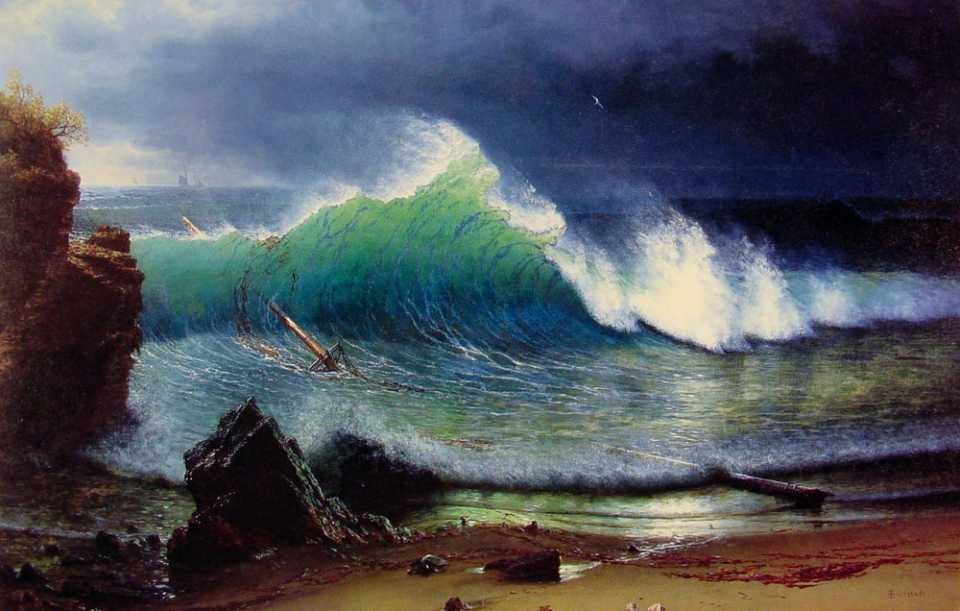 “The Shore of the Turquoise Sea,” oil on canvas, by Albert Bierstadt, 1878.

At Jenner-by-the-Sea we scurry
over boulders to the place
where the breakers bear down,

the edge where rub and thrust
rinses everything finally clear.
It has taken a long time

to get here, past failures at love,
at marriage, but sometimes, after all,
there is an accident of grace.

We are cautious
and treasure everything
in our tennis shoes.

We teeter
over the runnels that rush
between footings, in which,

emptied by the gasp and suck
of the sea collapsing back,
we find the small

stones we came for: freshets
of color like floral nuggets
compressed to their smallest hardness.

Jadeite. Feldspar. Serpentine
and the one with an orange-mango cloud
marbling through like a fossilized sunset.

We cannot know where they came from,
though we imagine an ancient vein
glowing under a billion years of sediment

somewhere up the Russian River,
a cliff quarried
by the current’s constant fingers,

then fanned from the river’s mouth
and tossed on this beach
like jewel-stones left by a passing goddess.

I press them between my thumb
and forefinger. It may not be so bad
to go on for years with nothing

happening, nothing
but the downward heft of sediment—and then
this blossoming

David Watts’s literary credits include seven books of poetry, three collections of short stories, two mystery novels, seven western novels, a Christmas memoir, and several essays. He is a medical doctor, a classically trained musician, inventor and former television personality and commentator for All Things Considered. He has received awards for his work in media, in medicine, and as a poet and author.