If I Have a Daughter 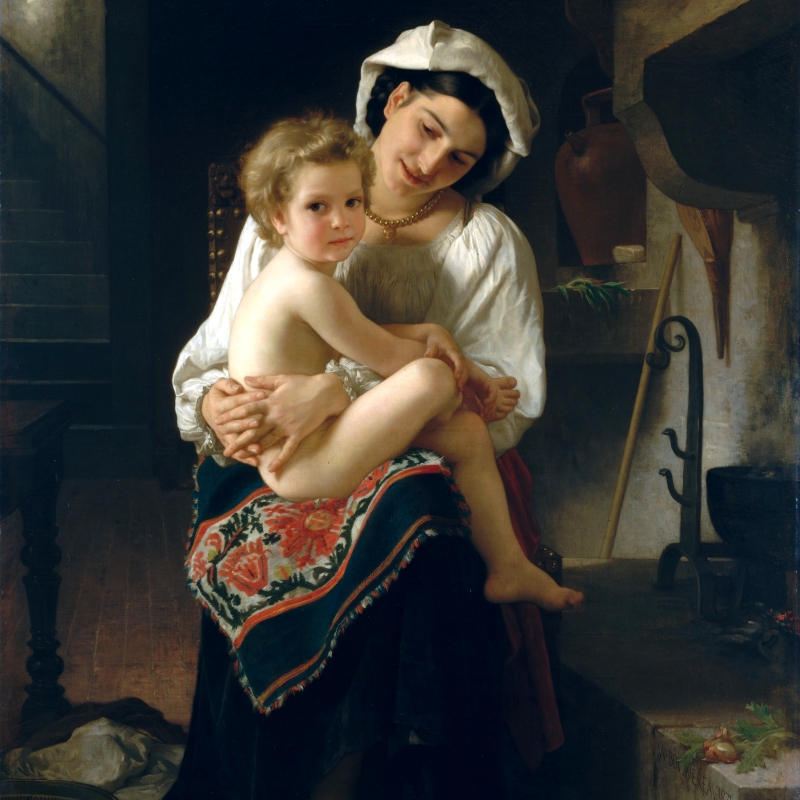 “Young Mother Gazing at Her Child,” oil on canvas, by William-Adolphe Bouguereau, 1871.

by April Ford
I.

If I have a daughter,
I will tell her
that by age sweet sixteen
she will most definitely
be fondled by a man.
Not a stranger—
strangers are only dangerous
if you follow them,
and my daughter won’t be a follower
—but his touch will feel strange,
even if in her burgeoning fantasy life
it was meant to be.
My daughter will be stunning;
men will start watching her before she’s fourteen.
Her shoulders will change hands
from inelegant fathering types with Donald Trump hair
to intentional types who convert girls to women for sport.
I will be honest when my daughter asks about men. When she asks:
Mother, how did I come to be?
Did you make me out of rose petals and moonbeams?
I will assure her he’s not like them, her father,
at least not as long as I’ve known him, and does it really matter
what he was like before then? We can excuse those behaviors
of men before we know them as our fathers, brothers, or lovers.
Can’t we?

If I have a daughter,
I will iron her clothes long after she’s old enough to iron them herself.
I’ve never been good at housekeeping, but I’m probably worse at advice,
except I can’t seem to stop talking to this empty space where,
just last month,
my uterus was.

If I could have a daughter,
it would be my life goal to make sure she never—not in a million years ever—
confused one kind of touch for another.
A woman has lost everything if she feels comforted
by the antibacterial caress of a man
who says if she gives it up now, she’ll have the rest of her life
(so long as she can withstand the constant, hollow ring).

If I could have a daughter, I would implore her to enjoy philosophers and plumbers alike. On Prom Night, I wouldn’t let her back inside the house until she told me about how her date couldn’t get it up and so they’d made out half-naked and bewildered in his car until they got bored and smoked a joint. She could tell me they hadn’t planned to use a condom, had planned to just see where things went and how far, but it wouldn’t matter. She could tell me they’d almost run away together, just because. It wouldn’t matter. I have a daughter is all that would matter.

“If I Have a Daughter” originally appeared in Grain Magazine.

April served as a guest editor for Pushcart Prize XLI (forthcoming in November). Her short story “Project Fumarase” is among the winning pieces in the previous Pushcart Prize XL. In 2013, April’s debut collection of stories, The Poor Children, won the Santa Fe Writers Project Literary Awards Program for Fiction. April teaches creative writing and French at State University of New York at Oneonta. She grew up in Quebec.