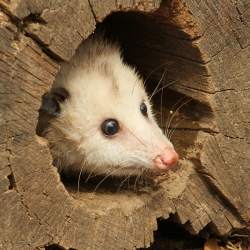 Last fall, after much consideration, my wife and I decided that we could no longer send our son to Sunshine Meadows Preschool. Their recommendation that we hire a full-time developmental aide to help our son “access the Sunshine Meadows Preschool academic curriculum,” as well as their thinly veiled insinuations about Autism Spectrum Disorder, weighed upon our decision. But our main reason for pulling our son from the preschool was that we believed the staff should have noticed that for the entire month of October we had been sending an opossum in his place.

We don’t believe our son needs the aide the school so firmly requested, and whether he is on the autism spectrum remains to be seen. The suggestion that we ought to “fast-track” him into a diagnosis struck an off-chord with us. Autistic kids deserve a real childhood—not just constant therapy.

So one night in September, in frustration, I said to my wife: “They’re dehumanizing him. We could send an opossum in his place and they wouldn’t even notice.” And we did. We sent an opossum.

It was relatively easy to catch one: an entire family of the varmints live in our trash bin out back. I simply scooped one up, dressed it in one of my son’s striped polo shirts and sent it off to school with a backpack and water bottle. In hindsight, I realize this was an incredibly passive-aggressive move, and I regret that. I do. We didn’t really think the staff at Sunshine Meadows Preschool wouldn’t notice that we had sent a pink-nosed opossum in our son’s place. We were just trying to make a point. Our son is more than whatever symptoms one may or may not observe in him.

That first morning we waited for over two hours for a call from Sunshine Meadows. “You sent an opossum to school instead of your son,” we imagined someone saying. To our shock and chagrin, we heard nothing.

At pickup that afternoon, my wife asked his teacher if our son seemed at all off. His teacher stated that he was a little more tired than usual but had had fun digging in the sandbox all afternoon. While we appreciated his teacher’s observation that the nocturnal marsupial we had sent in place of our son seemed “tired,” we thought, frankly, she should have realized it was an opossum. The poor fit of the backpack might have clued her in. Also, it wasn’t wearing pants. Also, it was an opossum.

As any sensible parents would, we immediately enrolled our son at a new preschool.  But we were curious.  Would Sunshine Meadows ever finally put two and two together? We sent the opossum the next day, and again the next, and the next, and it just sort of snowballed from there. I’ll admit, yes, I began to enjoy the routine and companionship that taking care of an opossum provided, and I missed the little guy while I was at work. I looked forward to the daily reports in the opossum’s notebook, which were quite positive. He sure gobbled down his carrot sticks today!

Still, regardless of my feelings for the opossum, the troubling fact was that Sunshine Meadows continued to miss the obvious—for weeks. And though I shouldn’t have been terribly surprised when pictures of the opossum appeared on the school’s newly updated website, it did catch me off guard. No one noticed that on Pirate Day the child in the eye-patch and chewing the corner of his treasure map was actually an opossum? No one thought it strange during Music Hour that one of the children had climbed inside the guitar and started hissing and baring its teeth when the janitor tried to remove it? And the picture of the rainbow on the “About Us” page—the giant rainbow the children made by dipping their hands and feet into pans of paint and stamping them all over a gigantic sheet of paper: one can see, plain as day, the opossum’s distinctive hind track and the skidding drag marks from its rat-like, semi-prehensile tail.

Now don’t get me wrong—my wife and I appreciate that the staff at Sunshine Meadows make a concerted effort to look beyond a child’s idiosyncrasies. It was one of the things that originally drew us to Sunshine Meadows. Our son, like all children, has his idiosyncrasies. But just as those idiosyncrasies should not be grounds for robbing him of a childhood, neither should they be excuses for unacceptable behavior.

Imagine an opossum. The teeth, the tail, the smell. You can’t tell me that no one noticed or remarked upon the horrid stink exuded from the opossum’s scent marking glands. Trust me, you would notice.

If our son truly smelled like that we would have expected a call home demanding we bathe him more regularly.

Again, we heard nothing.

Instead of honest communication about his behavior or hygiene, Sunshine Meadows continued to soft-pedal an autism diagnosis by talking about how happy our son seemed at school, how much he smiled. Which, yes: because opossums have mouths full of sharp teeth and, lacking sweat glands, pant like dogs.

But now I’m starting to digress and repeat myself, so let me just sum it up: if our son is on the autism spectrum, my wife and I are prepared to take that journey. We love our son to no end, and we love him unconditionally. We just don’t believe that a preschool should ever be in the business of diagnosing children with autism, ADHD, Sensory Processing Disorder, or whatever is currently in vogue.

We also don’t believe they should be diagnosing opossums.

I am afraid that if Sunshine Meadows continues to make an issue of the opossum’s need for a developmental aide—if they present us with an ultimatum, get the aide or go—we may have to pull the opossum from school. This wouldn’t pose such a hardship if we weren’t sure that most preschools would indeed notice the fact of its opossum-ness. Yes, of course, I could always return it to the trash bin. I’ve thought of that. But like I said, I’ve grown fond of the little stinker. In the mornings at breakfast it curls around my neck and begs bites of my scrambled eggs. I don’t know. We’re at a crossroads. I guess what breaks my heart, if I’m being honest, is that he does seem happy at Sunshine Meadows. I mean, it’s not a terrible place for semi-feral pets to spend their days.

“I Sent an Opossum to Preschool” originally appeared in The Good Men Project.

Steve Edwards lives in Massachusetts with his wife and young son. His writing can be found most recently in Electric Literature No. 6, AGNI Online, and Silk Road Review. He’s currently at work on a new nonfiction book about his grandfather’s appearance on the cover of LIFE Magazine in 1942. Educated at Purdue University and the University of Nebraska-Lincoln, Edwards works as an assistant professor of English Studies at Fitchburg State University.