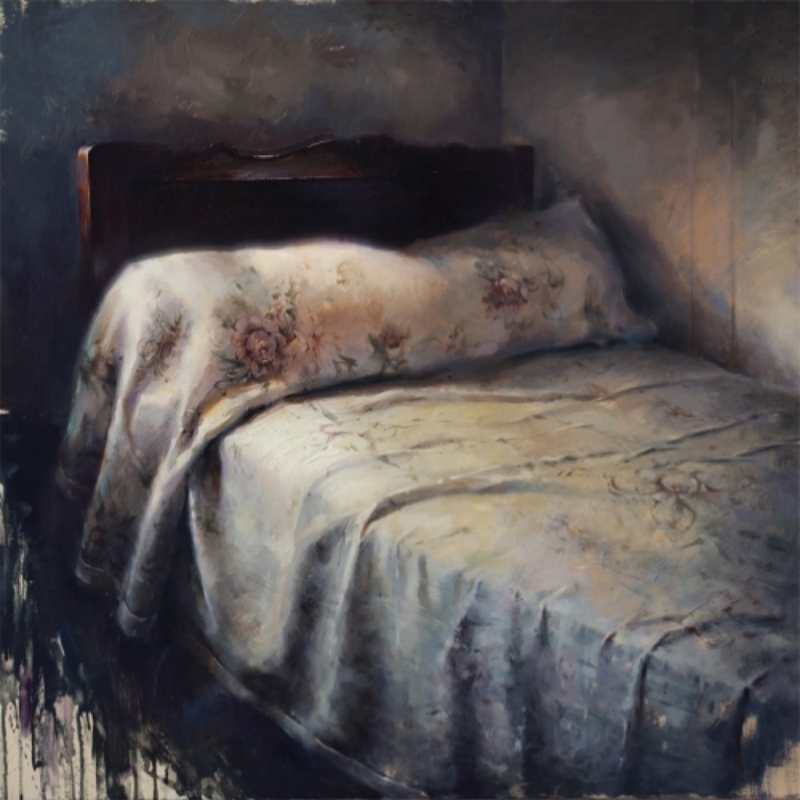 “Soft Whisper in a Quiet Room,” oil on canvas, by Ivan Alifan, 2011. Used with permission.

The doctor say you won’t make it through the night, say your lungs are too frail and your heart ribbits like a frog. He say he sorry, then leaves me alone in the hospital room where the smell reminds me of that last gulp of vodka I took before driving ‘cross town to this place where I squeezed you out. Jeopardy’s on the TV in the corner. Doc say before he goes it could be any time now. I picture a shoebox sized coffin. It should be me cramped into that tiny space, but it ain’t.

I doodled your name a thousand times a day. Even before I seen you, I knew you was made like on a potting wheel, formed together by the fires of my womb. You burned with possibility inside me. I was scared of you though. The very shadow of your body made me want to claw at all the places inside myself I would rather not know. You was right and true, and I wasn’t. I shoulda been feeding the flame of you that would eventually envelop me from the inside out, but I didn’t. I lacked the courage. Instead, I doused you with bourbon; I drowned you with vodka and rum.

When he comes back, Doc say there coulda been hope. I coulda saved you. He looks at me without actually lookin, his nose in a chart and the tone of his voice piercing me, piercing me. He says lots of things I don’t get, which the Doc don’t like. He wants me to feel what I done, let the burning in my belly consume me the way my love for you should have, only it ain’t ‘cause I still haven’t held you. The nurses say I can go down to the nursery any time, but to look at you with all of those tubes and things beneath the glass of that warmer is more an accusation than the doctor’s spiteful voice.

All night long I lie in my bed, get up only to use the bathroom and change my ice underwear. The sirens from an incoming ambulance blare on and off, and I watch the lights flash which cause shadows to dance in the red dullness of my head. My eyes take in the bustle, the frantic grasping at life.

I want to cry for you, but I want a drink even more.

When I wake, the nurse leans into my room and say you made it through the night, but things could still go any which way. I nod at her, gasp for breath as my chest gets tight, then look away too ashamed for them to see me so. I wait for something that will not come; I’m not sure what that might be. But I stay in my bed waiting and waiting and waiting. My crotch burns and my hands are shaking. And I keep waiting.

Ian Hilgendorf lives in Grand Rapids MI. His stories have appeared in Commas & Colons, The Molotov Cocktail, Eunoia Review, and elsewhere. Follow him on Twitter @IHilgendorf.