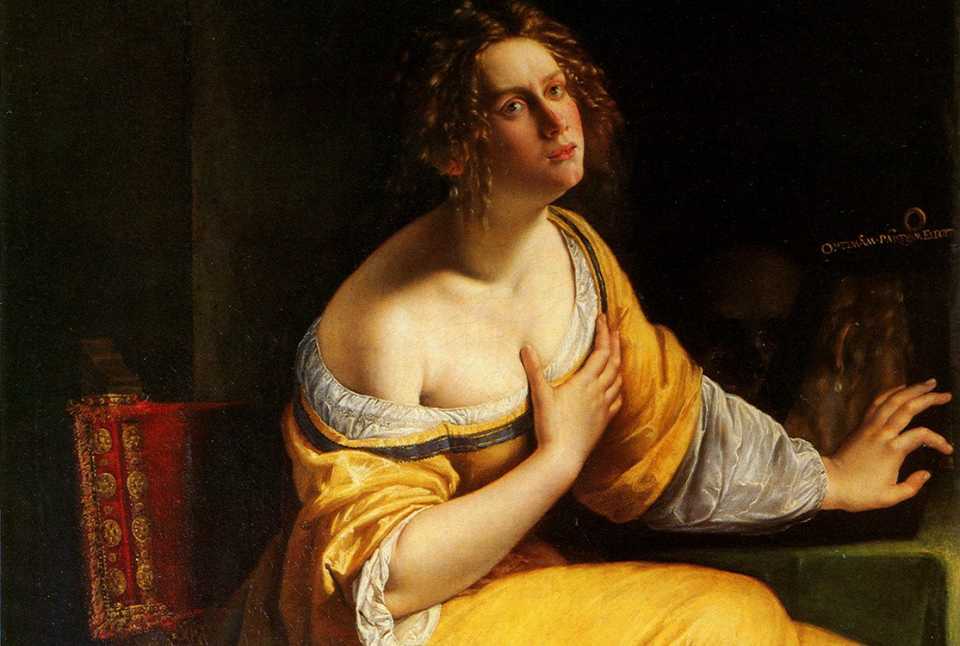 “Mary Magdalene,” oil on canvas, by Artemisia Gentileschi, circa 1616.

The landlord was an hour late. Caroline would be staying on the third floor of the small apartment building. She sat on the front steps and watched the tourists jostling towards the Duomo to tick off one more sight. She should not feel so superior. When, as a college student, she traveled and stayed at hostels, she did the same thing, keeping score of the museums, churches, and castles, the experience of which was supposed to enhance her cultural cachet. If Florence were her city, she would resent tourists.

In the cab from the train station, she had passed two magnificent Romanesque churches with scaffolding reaching around the sides. Always restorations or repairs. In the square, a grandiose bronze statue of a horse proudly carried a bronze man attired in a nineteenth-century frockcoat and boots. Some joker had climbed up the statue and placed an orange street cone on the head, a dunce cap. Caroline felt she should be wearing the dunce cap.

She had researched the guesthouse on the Internet: “Welcome to a romantic retreat unlike any other. Pensione Trova offers a unique and relaxing getaway from day to day reality.” She knew from working at the ad agency that such promises appeal to one’s hopes. Her ad agency promised shining hair, sweet breath, a speedy car, great gas mileage, relief from pain. Well, we depended on hope. How else could one live?

The Medici coat of arms, with its shield and crown, hung on a pole on the sidewalk here and everywhere throughout the city, still asserting ownership. This was the city of the Medicis, who consolidated their influence and eliminated their rivals and married off their children to kings and installed their relatives in cardinals’ seats and the papacy. They flaunted their power by collecting art, erecting monuments, building palaces.

Eric despised what the Medicis stood for, though he admired the art. Last year, at a traveling exhibit of the Medicis’ collection in Minneapolis, she had said to him, “They did a service in commissioning and preserving the art.”

He had stared at the marble inlaid side table with disapproval. “They were just glorifying themselves.”

“Yes, but they were patrons of the arts, not, for example, hunting or exotic cuisine.”

“I suspect they bought art by the yard, hired the interior decorator to fill up the walls with the most famous painters, to buy the most expensive furniture.”

“You don’t know that,” she said, though she half-believed him. She was being oppositional.

“And now we’re saving these ghost dwellings.” He pointed to the explanatory placard with a photograph of the Pitti Palace.

“Surely you don’t think we should destroy them?”

“There are so many poor people, so much misery, and we’re saving palaces.”

One painting in particular had caught her eye, Artemisia Gentileschi’s Mary Magdalene, sad but not sinful, her face lifted up out of the dark, right hand on her breast, the other gracefully touching a cabinet. Not naked and penitent, she wore a luxurious amber-colored satin gown and sat forward in her ornamented chair. Listening and watching, meditative and melancholy, she assessed everything.

“Art, museums,” Caroline said, opening her arms as if art were hers to offer. “History.”

“They imagined their tribe would live for hundreds of years.”

“They were right,” she said. Even before she and Eric were married they were having arguments. The relationship was already unraveling. But they had once had hope of a long and happy union. Nobody got married expecting to get a divorce.

“I’m so sorry,” the landlord said. He rushed toward her. “My faithful car, it broke down.”

“I understand.” She was on vacation. All the time was her own. No place she had to go. She was kinder to him than to Eric.

He was middle-aged and contented looking. He wore an ivory-colored suit with a sherbet-pink shirt, his grayish brown hair heavy around his face. He would not go bald in old age. “This is a beautiful city,” he said. “It belongs to everyone. You will enjoy yourself, I am sure.”

He showed her around the studio apartment, the small kitchen with the espresso maker, the shelves on which were neatly arranged cartons of pasta and gleaming bottles of olive oil, and he particularly wanted to explain about the trash: it was collected in this plastic bag and carried down the alley on Tuesday night, when it would be picked up in the morning. She nodded emphatically and repeated “Tuesday night,” to demonstrate her understanding.

“My father lived here,” he said, proud and proprietary. “You have beautiful view.” He gestured to the window, its shutters unlatched to let in the spring air.

The afternoon light was golden. To Caroline, the light felt antique, valuable. Across the street, a pink stucco building glowed in the sunset. She had not thought of the divorce for five whole minutes. This could be the beginning of her new life. Three floors below, children kicked a ball down the street; one boy fell and started crying and two boys put their arms around him.

The landlord tapped the wooden screen next to the couch. The screen was cracked. He sighed and said to the screen, “I will beautifully repair you.” He explained to Caroline, “I must get a special glue. I will get it next time.”

She wanted to compliment his language skills. She asked if he had been to America.

“Yes, I studied English in Canada.”

“I’ve never been to Canada,“ she said.

“You must visit. You are so close.”

“Yes. I live in Minneapolis.”

“That’s right,” she agreed. She and Eric had planned to go to Stratford, Canada, last summer, but his father had a stroke and they cancelled the trip. His father recovered well. She liked his father, but supposed that relationship would have to change after the divorce became final. Everything would change.

“Plumbing is good here and electrical.” The landlord wrote his home number on a piece of paper. “Please call me if you need something.” He turned to the door and stopped in front of a pale green card in a wooden frame nailed next to the door. He lightly caressed it as if the card were a saint’s relic. “My father,” he explained, “he passed away.” He saluted the card and smiled. “This was a note to me. He wished me well. I always touch it when I leave.”

He waved to her and walked out the door. She could just make out the Italian on the card: “I love you, my son. Remember always.” She touched the note too.

Cezarija Abartis’s Nice Girls and Other Stories was published by New Rivers Press. Her stories have appeared in Per Contra, Pure Slush, Waccamaw, and New York Tyrant, among others. Her flash, “The Writer,” was selected by Dan Chaon for Wigleaf’s Top 50 online Fictions of 2012.“The Argument,” was chosen by Beate Sigriddaughter as a runner-up for the Fourteenth Glass Woman Prize. She teaches at St. Cloud State University.