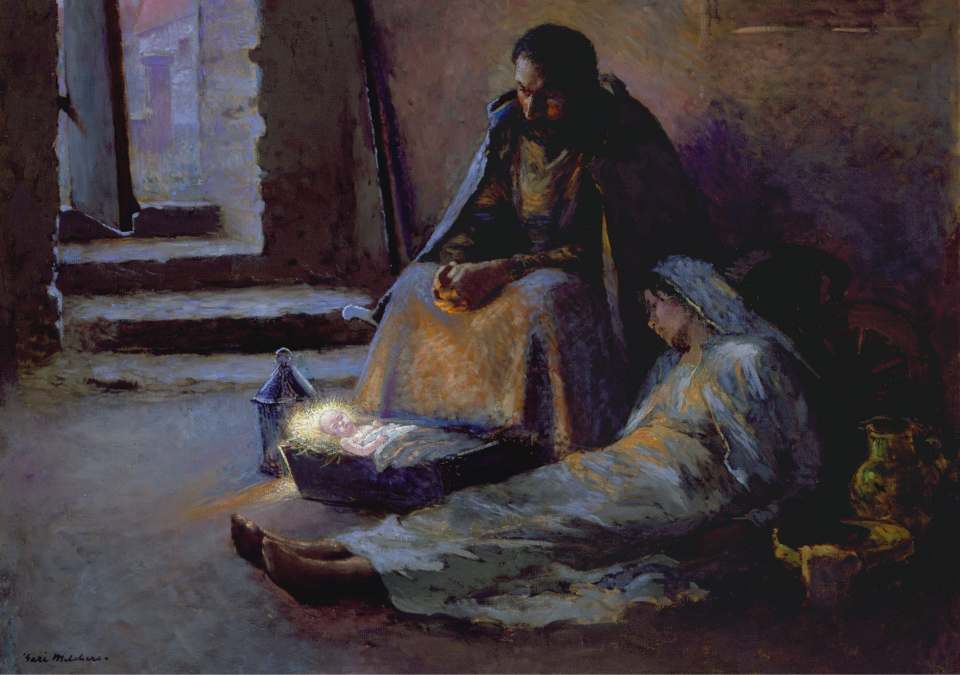 It was a spur-of-the-moment thing:

“Put on your winter coat and get a warm blanket,” I told my daughter. “We’re going out to look at Christmas lights.”

When I was a kid, one of the highlights of the holiday season was driving around town looking at everyone’s Christmas decorations. Our family—seven kids and two adults—would pile into the station wagon and off we’d go.

Normally, my father and a car full of kids was a volatile mixture. But it was different at Christmas. When you put us in our pajamas, wrapped us in our blankets, and took us out for a late-night ride to look at Christmas decorations, it was actually peaceful in that station wagon.

But that was then. My days of riding around in pajamas and blankets are pretty much over. However, one of the privileges of being a parent is that your children provide you with a legitimate excuse to do some of the things you haven’t done since you were a kid. And so, we set out in search of wonderful, awe-inspiring Christmas lights.

Unfortunately, things seldom go according to plan when you try to recreate your childhood. Some little variable always changes the equation, sometimes for the better, sometimes for worse. Such was the case that evening when I took Kathleen, my little six-year-old variable, out for a Christmas drive.

I had in mind a little subdivision in the neighboring town of Sycamore, Illinois, about five miles from our house. My wife and I had gone there earlier that week for a Christmas party, and we both thought it was nice that everybody in the neighborhood had decorated their homes. However, rather than drive through Sycamore to the subdivision as I had done with my wife, I decided to save time by taking the back roads. It turned out to be a bad choice.

We saw a few decorations at farmsteads en route, and when we got a little north of Sycamore, I turned down a road that I thought would lead to the subdivision. I was wrong. We drove around for half an hour without seeing any lights at all, let alone Christmas lights. However, while we were lost, we had a very interesting conversation:

“Daddy,” Kathleen asked, “Do you believe in Santa?”

My answer seemed to be acceptable. Score one for Daddy. Soon came another question.

“Do you believe in God?” she asked.

This one caught me off guard. I’m sorry to say despite attending St. Elizabeth Elementary School and serving as an altar boy, and despite a higher education that included exposure to Hinduism, Buddhism, existential philosophy and the theological writings of Paul Tillich, I was not prepared to give my daughter a definitive answer at that moment. I had never been able to assimilate any of the things I learned into a set of beliefs that made much sense to me, and it seemed to me that an appropriate answer would require a lengthy discussion of abstract and complex theological and philosophical thought. And after all that, it still pretty much comes down to a leap of faith.

The thought of trying to explain all of this to my daughter in a few simple words seemed overwhelming. However, in all my feeble reflections on the subject of religion and God, Being and Non-Being, I have come to one conclusion: I do not believe that there is nothing—which implies that I must believe that there is something. And so, I took a leap that night and provided my daughter with a slightly boiled-down version of what would otherwise have been a very lengthy and probably confusing answer.

There was a short pause, then: “Daddy, do you believe in heaven?”

I thought for a moment. “I believe we will always be together,” I said.

“I think Pop is in heaven,” said Kathleen.

Pop was Kathleen’s great grandfather. He had died earlier that year after a long illness.

“It made Grandma sad when Pop died,” she continued.

“I liked Pop,” said Kathleen. Then she added, “It’s not nice to make fun of old people.”

There was another short pause.

“Everybody dies, even if they don’t think they will,” said Kathleen.

There was no skirting this comment. “Yes, that’s true,” I said.

We drove along the blacktop highway, cutting across the countryside. I hadn’t noticed it until then, but at some point it had started to snow—big, heavy, wet flakes. Other than that, it was a very still, dark December night. My daughter was quiet for a long time, but she was alert, looking out the window, thinking hard. Finally, she spoke again.

Fear of dying … at last, a subject that I knew something about.

“A lot of people are afraid of dying,” I said, “because we don’t know what’s it’s going to be like.”

“Yeah, we don’t know what it’s going to be like in the ground or if we’ll go to heaven,” she said.

I did not want her to have nightmares about being in the ground. “You don’t actually go in the ground,” I told her. “Your body does, but by then you’ve left your body.”

She thought about this, and then said, “I don’t get you.”

“That’s okay,” I said. “Wherever you go, I’ll be there.” This I truly believed. I could not imagine any circumstances, even death, that would cause me to drift very far from my daughter.

“And Pop will be there,” said Kathleen. “And Gram.”

The conversation went on like that for a while longer. I was a little angry with myself for not being more prepared for such a conversation, but I was pleased to see that her mind was already at work on some of life’s biggest questions. I took comfort in the realization that my daughter would probably be able to figure out most things for herself—which means she’ll be a lot better off in the long run than she would be if she relied on someone like her father to figure things out for her.

While all this was going on, I was still not finding the neighborhood. At some point I realized that Kathleen didn’t really know why we were driving around. When I said we were going “to look at Christmas lights,” she thought I meant that we were going to a store to buy more lights for the Christmas tree. By the time she figured out the real purpose of our trip, she was pretty tired. When I finally found the neighborhood, she was asleep.

It was just as well. On second glance, the decorations in the neighborhood seemed ordinary and unimaginative. There was nothing particularly wonderful or awe-inspiring about them. I drove around for a little while, but by then I was tired, too, so I turned around and headed home.

The whole excursion could have been pretty depressing. I had wanted to show my daughter some wonderful Christmas lights. Instead, I got lost. Then, when I finally found the neighborhood, the lights were nothing special. It was a far cry from the memories I had of driving around, looking at decorations when I was a kid. But that’s okay. We had discussed Santa and God and heaven and death—a conversation I would not soon forget. And at the end of the evening, I was heading home while my daughter slept like an angel in the seat next to me. I would not trade that drive with my daughter for anything.

Just then, Kathleen opened her eyes a little.

She didn’t answer right away. I looked over at her. She looked very warm and cozy—very peaceful—the way a child in warm pajamas and a blanket should look when out for a Christmas drive with her father.

“Maybe this is heaven,” she said.

I thought about that for a moment.

Editor’s note: “Heaven” was first published in 1996 in The Chicago Tribune Sunday Magazine and was quietly passed around by its fans. Years later I received a copy (of a copy of a copy) tucked inside a Christmas card, and I tracked down the writer. Mike’s daughter is now grown and married. “Heaven” is the anchor piece in his collection Wise Men and Other Stories. Feel free to share the link and continue the story’s legacy. —SRJP

Mike O’Mary is author of Wise Men and Other Stories and The Note. He is also the founder of Dream of Things, which publishes memoirs and anthologies, including Saying Goodbye: to the people, places and things in our lives. Mike has published stories and essays in the Sunday magazines of The Chicago Tribune, Denver Post, Rocky Mountain News, Baltimore Sun, Cleveland Plain Dealer and Detroit Free Press. He is a graduate of the University of Montana (MFA in Creative Writing, MA in English Literature) and the Second City Comedy Writing Program.