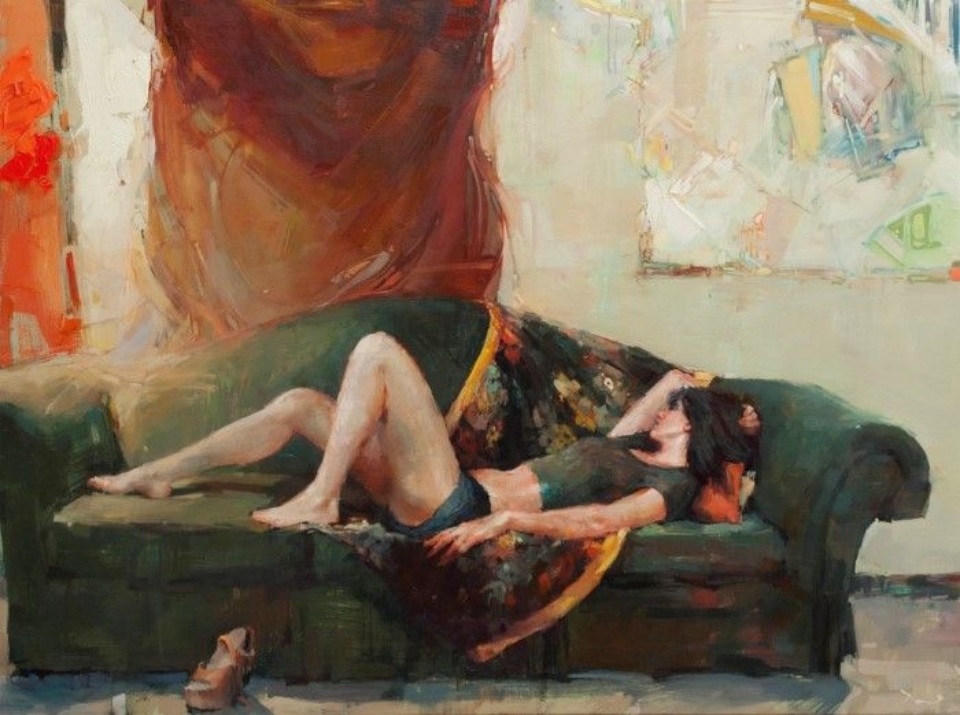 “A Green Couch,” oil on canvas, by Theo Felizzola, 2013. Used with permission.

This couch is comma-shaped and covered in rich green fabric. Its cushions are stiff and springy, causing a cell phone tossed casually to bounce several inches. This couch required the exertion of two large men to wrestle it into our tiny house, and will never leave it again unless I knock down a wall or two. Not many have sat on it yet—my father, sinking down with an old man’s “Oy;” my teenaged son, stretching out to see if it can hold his full length (it can), my son’s new girlfriend and her mother, perched awkwardly on the edge while I try in vain to extract conversation from them.

This couch was made for grownups, vintage grownups of the 1930s, cinch-waisted female grownups and men who wore hats and drank martinis. Then it landed with the second generation of the family, beginning another life with my sister’s in laws, who decided it would live in a very large wood paneled room, facing two corn-colored armchairs, in a house ruled by collies named Mac, and later, poodles named Mister.

Thirty years later, the last relative leaves, unwillingly, to calcify in assisted living, never knowing the house is being cleared out and sold. This couch moved out of its dank living room to a sunny upholstery shop where it spent two weeks being reinvigorated, like Dorothy in the Emerald City, becoming the color of Emerald City, losing the forlorn moldy smell of its former life, but not the ghosts of the many rumps that sank down upon it.

This couch is not like that couch, the old gray green one, the first I’d ever bought after a lifetime of sad futons, from a Haggerty’s salesman named Kwame who wore expensive shoes. That couch was so soft you wanted to pet it, but began sagging in the middle and required propping up with wooden blocks, that couch was where I spent seven years of Saturday nights talking to my boyfriend, the tall, pale boyfriend who, if I am being truthful, bought me the couch himself, and who is gone now, gone like smoke, though not gone like the couch, which was carted out the door by thrift store volunteers, one of whom mentions he used to own the very same couch, the couch with which he started his marriage. The boyfriend left of his own accord, after a short conversation on the couch, and then a long hug, which should have spoken volumes, but did not.

This couch will get to know my sleeping body, a room away from my bed, fraught with insomnia, new territory where I might finally rest without waking every few hours, a clean slate, a patch of grass in a quiet forest, a rivulet running over stones, a long drink of water, dreamless, peaceful.

Beth Bilderback is a writer living in Norfolk VA. She has work forthcoming in KYSO Flash.