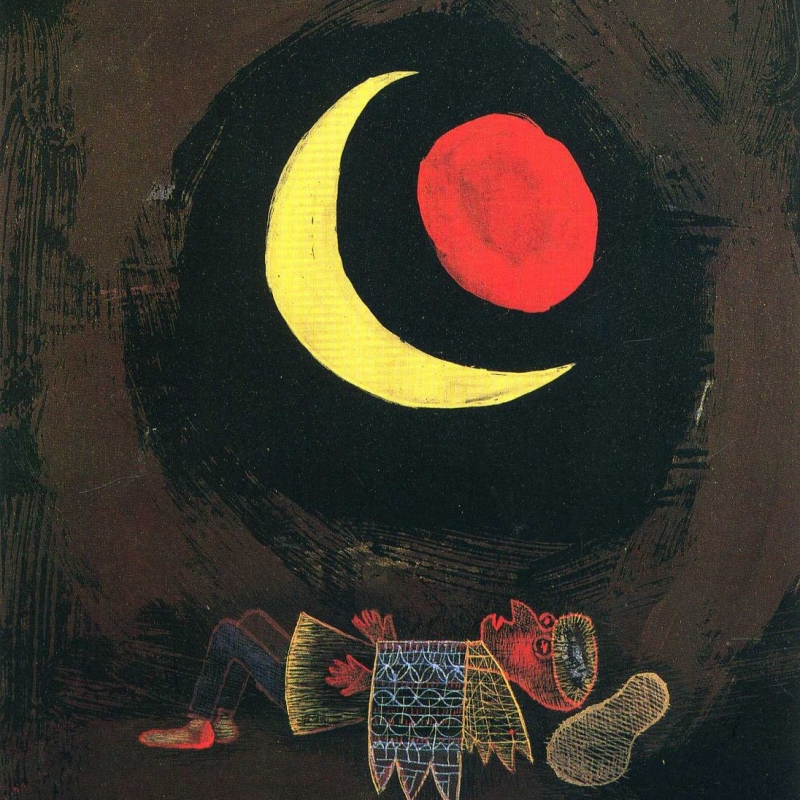 “Strong Dream,” watercolor and gouache on paper, by Paul Klee, 1929.

Rainer Maria Rilke (1875-1926) is one of the most influential poets in German literature. Following are new translations of four of Rilke’s poems from his 1907 work Neue Gedichte (New Poems). The translations, by American poet Len Krisak, are “form-true” (line-for-line, original meter, rhyme scheme preserved). A compilation of Krisak’s translations of all 172 poems in Neue Gedichte is forthcoming.

Commissioned for the Painters’ Guild. It might
be that the Savior never touched him, or
perhaps no saintly bishop ever thought it right
to step up to his side and lay a light
hand on him (in this work he’s posing for).

And was this all—knees yielding to the floor
(just as it’s all we ever learned): to kneel
so one might rein in hard—to bring to heel
deep in the heart—what bodies will demand
to burst with: horses clenched within one’s hand?

So should some huge thing finally come to be—
some something never written down or pledged—
we could expect that it would never see
us, but come close, in stark proximity,
though it were wholly, deeply self-engaged.

Epitaph of a Young Girl

We still remember, just as if once more
these things must live in their entirety.
As if you were a lime tree on the shore,
you bore your little breasts into the roar,
the rushing flood, of his divinity:

He was that slender-wrought
exile who pampers women. How he glows,
as sweetly and as warmly as your thought.
Above your flanks, the shadow he has brought
now bows and arches like your young girl’s brows.

How I have felt what farewell means! And how
I know it still: cruel, dark, invincible
in tendering a bond that’s beautiful,
then shredding what it offered only now.

How vulnerable I was! What called to me,
I looked upon. And then its grip let loose
of me, and stayed behind like every she,
yet tiny, white, and little more than this:

a waving even now not mine alone;
a far-off flutter—faint; already dim;
unclear to me. Perhaps a plum-tree limb
from which a hasty cuckoo has just flown.

Just like someone lying down, he stands,
hung there by his huge will. He’s somewhere other:
far-off, as if he were a nursing mother;
bound up tight in his own wreathen bands.

And the arrows coming—now and now
(as if self-willed, out of his loins they spring,
their free ends made of iron quivering).
Darkly, though, he smiles, unhurt somehow.

Only once does massive sorrow grow:
till his eyes see something mean and low,
they lie wide open, filled with pain. But then,
scorning them, he lets those killers go
who meant this beauty not to live again.

Len Krisak’s work has appeared in Agenda, Commonweal, The Hudson Review, PN Review, The Formalist, the Cumberland Poetry Review, Tennessee Quarterly, Classical Outlook, Pivot, Rattapallax, The Weekly Standard, The Oxford Book of Poems on Classical Mythology, and elsewhere. His poetry has won the Richard Wilbur Award, the Robert Penn Warren Prize, the Robert Frost Prize, and dozens of other awards. He has published four volumes of poetry as well as translations from Latin of Horace, Virgil, and Ovid. He has taught at Brandeis University, Northeastern University, and Stonehill College. In 1995 he was a four-time champion on the television game show Jeopardy!