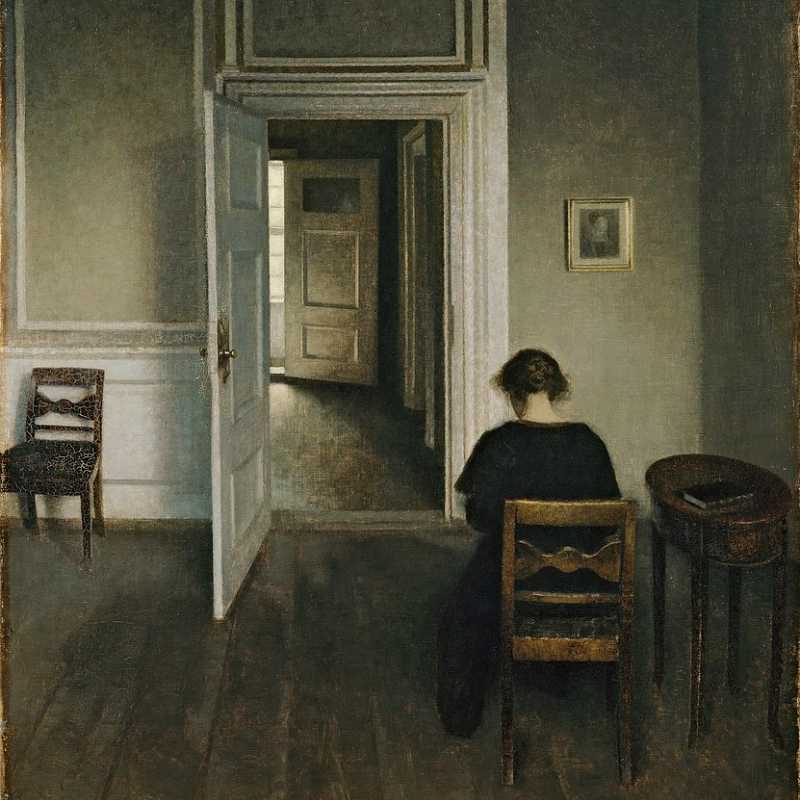 I take your portrait down to clean
and notice the scar of another
hanging, painted over. Whoever
lived here before also put a picture
on this wall, looking into the room.
It’s an old building. I remember
the landlord saying that over and
over as if it explained something,
the plumbing, the tile, the deaths
of people we love. And if it really
was “near a hundred years” then
there wasn’t just one picture before
yours, there were many. I’ve never
wanted a time machine so I could
stop assassinations or feed french fries
to dinosaurs, but I want one now,
want to set it before your lost smile
and watch the pictures change. No
telling into what: another person
or ten raising glasses, a faithful
dog, maybe Christ. Of course, there
must’ve been things, too: a calendar,
a coat peg, a little shelf for a candle.
But, I bet it’s mostly faces and
dear ones. That’s what you put on
a wall like this, that’s who should
greet you when you come home
from a wrong day. I would stop
the machine when the building
began to look new, just before
the first nail. Then I would run it
forward again and make a poem
of time, so that every picture—all
the saints or sailboats, all the wild-
eyed babies—digressed to you.

Brendan Constantine’s work has appeared in Poetry, Tin House, Best American Poetry, Ploughshares, and elsewhere. His most recent collection is Bouncy Bounce from Blue Horse Press. He has received support and commissions from The Getty Museum, The James Irvine Foundation, and the National Endowment for the Arts. A popular performer, Brendan has presented his work to audiences throughout the U.S. and Europe, also appearing on NPR’s “All Things Considered,” TED ED, numerous podcasts, and YouTube. Brendan currently teaches at the Windward School and, since 2017, has been developing poetry workshops for people with Aphasia.