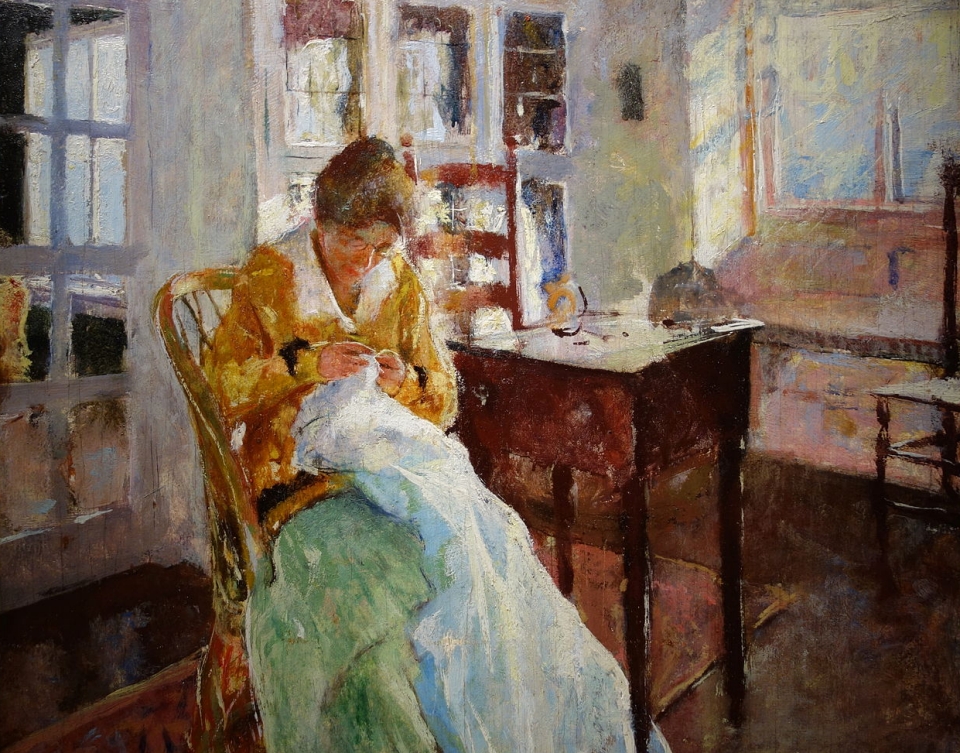 “The Dress Maker,” oil on panel, by Charles Webster Hawthorne, 1915.

Outside the kitchen window, squirrels scattered the seed from the birdfeeder Paula’s dad had set up. The seeds gleamed in the sun like drops of water. She wished she had a diamond necklace to show off to her friends at school. The radio squawked the boring news about the missile crisis.

“What I want you to do is sit with your grandmother,” her mother said. “Finish your sandwich and go keep her company. She had a terrible dream. She was in a car, our old Pontiac, and the door was locked. Next to her was a baby, maybe a doll. With eyes big as planets.”

“I hate salami. I just want a new dress for the dance.”

Her mother stared at the apron folded over the back of the chair beside her. There was a rip in the pocket. “I’ll sew you one.”

“I want a dress from Gimbels. Trudy McMullen showed me a picture in Seventeen.”

Her mother pushed the plate with the salami sandwich toward her. “We don’t have the money. You know that, Paula. Your father’s already working overtime. What does it have? Ruffles? Flounces? I’ll make it look like that.”

“Why am I fighting with you? I don’t want to fight with you.” Her mother reached for Paula’s hand. “You’re my baby.”

Paula sat back on the hard kitchen chair. “I’m not a baby anymore. I’m fourteen. Why do you want to boss me?”

“This is not bossing. This is—necessary. You stay with your grandmother. I’m going to the doctor. It’s always a long wait.”

“Just throwing up in the morning.” She smiled apologetically. Above her, the thin autumn light wavered. “Bunnies hopping in my stomach, ha-ha. It’s nothing. You need to keep Grandma company.”

“Grandma won’t know whether I’m there or not. It’s like I’m talking to myself. Her mind is gone. Gone, gone, gone!”

“Not true.” Mother put down her own sandwich. “The other day your grandmother remembered taking me to the church fair when I was a little girl. She slapped me because I ran out into the street. I don’t even remember it. She said I was five. And later they bought me a pink cotton candy. She said she was sorry. You have her big eyes.”

“They’re beautiful. That thin moon-slice of white under the iris. Like Bette Davis’s eyes.”

“Trudy made fun of them, said they were like marbles in a plate of mashed potatoes. Then she said hippopotamus eyes.”

“That girl’s just jealous. Besides, hippopotamuses have tiny little eyes. Don’t pay attention to her.”

“The paper I wrote on Macbeth, it was on the spooky witches. Trudy wrote on the theme of Fate. She said that was more mature. She said I was puerile.”

“Pooey on her.” Her mother leaned across the table. “Hey, I want to see a smile on your pretty face. Do you like Joey a lot?”

“Sure. He’s not as dreamy as Darren. But Darren is taking Trudy to the dance.”

“Joey is a nice boy, comes from a good family.” She looked out the window, wrinkles on her forehead. “Mr. and Mrs. Tucci are good churchgoers.” She rose, walked to the Frigidaire, reached up to the radio, and turned it off. “I’m tired of forever hearing politics. Kennedy, talk-talk-talk, war with Cuba.” She sat down, picked up her sandwich, put it back on the plate. “Mrs. Tucci said she’s deathly afraid she might be pregnant. She’s afraid she’ll have a nervous breakdown. Doesn’t know what to do. They can’t afford another baby. But they all love each other, that’s something. What if you were to have another brother or sister?”

“The other day Mrs. Tucci said family is the only consolation in life. Strange thing. She sounded sad.”

“I’m sad too. Mrs. Boyle gave me B plus on my Macbeth paper, and I won’t get into Wellesley, and I won’t write famous books, and my life will be a failure. I’m afraid.”

“Paula, someday you’ll be famous, you’ll have a college degree, you’ll remember what I’ve said to you. Don’t you roll your eyes at me. Now I want you to spend time with your grandmother upstairs. She’s your flesh and blood.”

“There was a lot of pain in their lives. Immigrants. Came with nothing. She sewed her aunt’s ring into her pocket to keep the memory. ‘Family is the only jewel’ she said. I want you to get to know her. Before she dies.”

“I know her, I know her. She’s a crazy old lady who complains all the time about her bones and her chest pain.”

“It could happen to you too, you know. You could lose your memory. You could be like your grandmother. Mumbling, waiting, scared like a mouse.”

“It runs in families.”

“I’m scared it will happen to me. Don’t look so surprised.”

“You take a vitamin every day, Mom.  You cook lots of vegetables. Last week you got a permanent at Trixie’s Beauty Parlor. It can’t happen to you.”

“Stranger things have happened to people than losing their mind. People get locked in cars, have heart attacks, fall off bridges—jump off bridges. But maybe it won’t happen to me. On his deathbed, your grandpa kept practicing his times tables to keep his mind sharp. But he wasn’t the one who became senile.”

“I hate the times tables. I hate history. I want to be a writer.”

“Of course, you can be a writer. You’re good at spelling. I taught you good habits. Of course you’ll succeed.”

“I want to write mysteries about a lady detective who has a teenage girl assistant. They solve crimes and find hidden fortunes and stolen jewelry. They make the poor people happy and rich.”

“I’d sure like to read those books. The poor becoming rich.” She stared at the table and brushed at a crumb. “Where’s Pinky? You didn’t let her out this morning, did you? She scares the birds.”

“She’s prowling in the house somewhere. Do animals get senile?”

“They get hungry, they get pregnant, they probably get senile. They probably get sad and depressed. I don’t think they worry about being ugly. And they don’t want fancy, store-bought dresses.”

“I wanted to be a ballerina but I grew tall. Life’s not a ballroom. It can be a sledgehammer. And now I want you to sit with Grandma for a while. She’s nervous again. Tapping her fingers together. Talking about coming to America on a ship. The other day she said she intended to leave her wedding band to you. Don’t look so sad. She hears voices, she said. Know what? I hear voices. I hear voices from the past.”

“You’re fine. You’re beautiful. You’re … statuesque. I was taller than the boys when I was your age. Your grandmother said they would catch up. She was right. She loves you, you know. Look, there’s Pinky, rubbing at the door and meowing. Get her some food and bring her up to Grandma. She loves petting her. I’m going to the doctor.” She carried her empty plate to the sink and tripped on the braided rug. She dropped the dish, which crashed to the floor. Her shoulders slumped.

The wan light that filtered through the curtains made her mother’s skin look blotchy. Her mother knelt on the diamond pattern linoleum and scraped up the shards with a knife.

Paula felt something like sorrow or fear or strange pity. “I’ll never get married.”

“Don’t say that.” Her mother tossed the broken pieces in the trash. “Family is good. It’s memory and history. Your grandmother says it makes up for everything. Last week she said she was ashamed to end up this way.”

“She was scared, I think.” The light showed the lines around her eyes.

“She’s afraid she’ll wind up in an old folks’ home. Crazy, snoring in a bed for anyone to see who passes by. Drinking water through a straw.”

“I finished my sandwich. See? You go. I’ll wash the dishes. I’ll stay with her. Me and Pinky.”

“You have a good heart, Paula. When I come home, the three of us will walk to Isaly’s for an ice cream. We’ll celebrate.”

“My health, your health. Tall girls. We’ll celebrate. Grandma’s stories and yours. Yes? I like your smile. Don’t give up, Grandma said.”

“You were loved, she said.”

“She was talking to me.”

Cezarija Abartis’ Nice Girls and Other Stories was published by New Rivers Press. Her stories have appeared in Per Contra, Pure Slush, and New York Tyrant, among others. She participates on Fictionaut, ShowMeYourLits.com and Zoetrope.com. Her flash, “The Writer,” was selected by Dan Chaon for Wigleaf’s Top 50 online Fictions of 2012. “History,” published by The Lascaux Review, was chosen as April Story of the Month by The Committee Room. Recently she completed a novel, a thriller. She teaches at St. Cloud State University. Her website magicmasterminds.com.