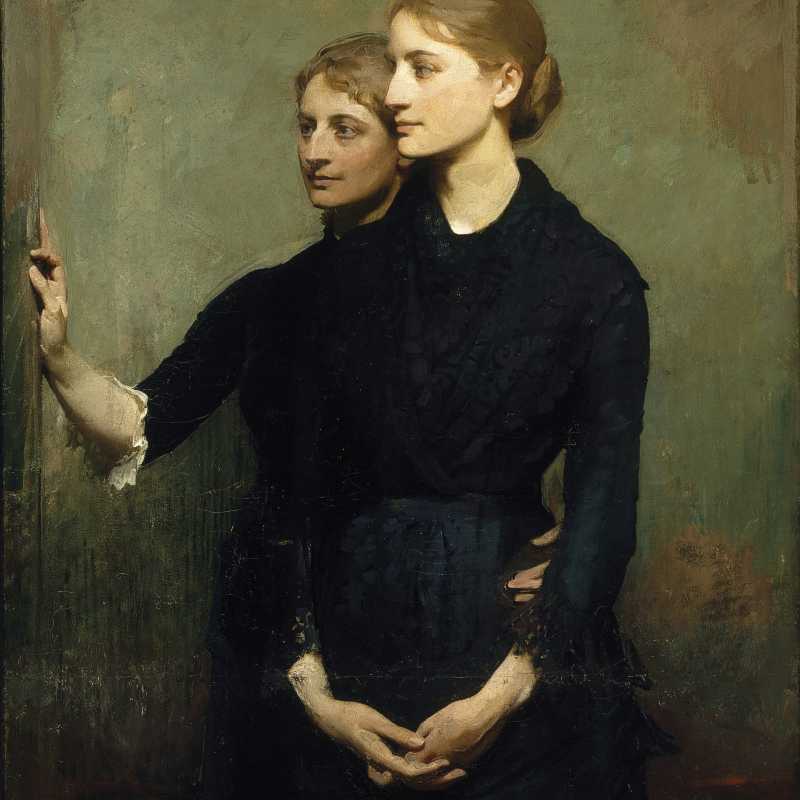 A week before the party, I text my newfound brother and sister about social distancing. The wording has to be right; I don’t want to sound uptight. I’m the free-spirit most likely to lose her top in the pool battling nieces for a spot on the raft. I’m the one who will come up with a truly dangerous game to play on the trampoline. I’m the fun aunt.

Hey dibs, my text goes. So excited for birthday weekend. I am donor-conceived, and so is my brother, and we all met electronically last year. Our three birthdays fall just a few weeks apart, but it’s the first time the three of us will be together in one place. I’m already nervous: my sister is an ER doctor, and my brother also has a smart job. They are adults with houses and children. I am a forty-six-year-old woman who owns a hamster, the only one not bringing a family of her own to the party. Just want to check in about safety!! I debate the merits of adding a third exclamation mark.

In 2019, before saliva was scary, I used the alchemy of my spit and the internet to find my donor-father, anticipating some sort of genetic jump-scare. On the maternal side, my family history reads like a V.C. Andrews novel, my mother’s story a murky pond, placid on the surface with secrets unspooling under the rocks at the bottom. When I was sixteen, she told me I came from a sperm bank and dropped the subject fast enough that I knew not to pursue it.

Knowing the answer to the question who is your family is a big piece of telling the story of yourself, starting in elementary school when your teacher asks you to locate yourself in the branches of a family tree, but not knowing my father’s identity meant I could tell whatever story I liked. I liked to think my father was Bill Beutel from Eyewitness News. He looked like a man who never lost his temper and yelled I HATE YOU FUCKING KIDS because you spilled nail polish on the rug.

After all those years of speculation, the 23andMe website gave up my donor-father’s name with an anticlimactic lack of struggle, and I wrote him a cautious email, double checking to make sure none of my neediness leaked out. There should be a squiggly line for that; my spelling and grammar are fine, but I need some kind of auto-correct for the phrase that shows my desperation for fatherly acknowledgment. I reassured him I just wanted medical information, and I didn’t ask him to read forty years worth of my stories. This stranger can never know how hungrily I scoured the internet for his photos. He’s enough of a public figure that there are even videos of him, my stomach a trapdoor sprung every time he pulls a face that I’ve only ever seen before in the mirror.

In the beginning, my father wrote me back with warmth. I told him I was a writer, and he told me about his parents, children’s book authors whose names my partner immediately recognized. That book was my favorite. A windfall of pride: the grandparents are even better than Bill Beutel, proof of genetic worthiness, even though I do not get to claim them publicly because that is how it works with anonymous donations. The half of my DNA that I want to brag about is the half that has to stay a secret.

My father mails a box of my grandparents’ books to the school where I am a teacher, and it’s so heavy I need to push the box down the hallway with my foot. I hope that someone will stop me and ask what I am pushing, so that I can say, oh it’s just a present from my father in a breezy tone of voice. His return address is on the box and I put it in Google maps to see how long it would take me to drive there, if I were invited, and if I were better at driving.

The party is at my sister’s. She did not come from a cup at the sperm bank. She was raised by my father (Her father. To her, I always refer to him by his first name, never attempting to hook an arm around him with a possessive pronoun), and she sends me old newspaper articles featuring our grandparents, with my father and my uncle as children, holding up the books starring the characters they were named after. My father and uncle named their children after characters as well. They are all escaped figments of my grandparents’ imaginations. My first name, Treena, is in one of their books too, although this was just coincidence, and they spelled it differently.

My sister has the famous last name. I have the last name of the man who adopted me, the one my mother divorced and coached me to be embarrassed of. He’d dropped out of school in the eighth grade and struggled to write letters, and when I asked if I could call him, my mother said it was expensive and pressed me to start calling her new husband Dad instead. I complied. I was five, and an extra father seemed like a good idea. I called the one I’d started out with Old Dad.

Apparently you can trade up. I am fascinated by my new siblings, by my biological father and the trove of family lore he comes with. I continue to write to him, and his responses grow terser until he falls silent, alluding to marital pressures.

I get it. To my father’s wife, I am not family. Still, I post pictures of myself online with my newly acquired sister and her young daughter, the three of us laughing the way you laugh when you know people are watching and you want to show that you are having a nice time.

Because of the pandemic, when I get to the party, I do not hug my brother and sister, although I want to so badly my arms itch. I wave, which seems more like a good-bye than a hello. My estimation of six feet varies with how much I like someone, and the distance between us feels sloped, tipping me towards them. We live in separate states, and saying no to this party is unthinkable in the face of a gnawing fear that there won’t be another chance for all three of us to be together at one picnic table. That is the other thing about new family—you haven’t had any conflicts yet, so you don’t know if you can safely make it to the other side of one.

A part of me wants to go and hide in the bathroom, to text them separately, I feel so nervous. Texting is easier than talking. My brother would text back a reassurance, swearing I wasn’t acting that weird. My sister, a note of identification: I’m nervous too! In real life, the three of us have the same awkward laugh. But if there are gaps in the conversation, the dogs and children fill them. There is a birthday cake. Rather than blow out my candle with my own potentially infected breath, I pluck it from the cake and wave it, flinging wax everywhere. I wish for this family. People talk about family of origin and family of choice like they are two different things, but sometimes they are both.

In the photo of the three of us, you can tell we are related. We look the same, even if I’m the shortest by a solid foot and still trying to reserve a COVID-appropriate distance, listing to one side.

Are you going to post that picture of us, I text my sister later. If it gets back to her mother, she’ll be furious. Her mother calls my brother and me those people. We have no idea how many of us there are, we diblings, shadowy as the monsters in my grandparents’ books, forever trying to start trouble. In 1974, donors were financially compensated, thanked for their masturbatory public service, and assured their identities would remain hidden forever. Doctors advised mothers not to tell us. These were medical-grade secrets, even if it meant we grew up in families baffled by the distance between us and the people we shared a dinner table with.

All my siblings are half-siblings, but stitching together a relationship with these two makes me feel like the gulf was not entirely my fault. It changes the story I tell myself about myself. And also: I confess to my mother that I found my donor-father, although I know I am venturing into the boggy territory of family secrets. It takes her a while, but eventually I get a text back.

How do you feel, she asks, startling me. I can’t remember her ever asking me about my feelings. It’s a struggle to make room for my mother’s question in the story, for the arrival of a caring parent in my emotional-orphan narrative. She asks, Did you always wonder?

After the party, my sister posts the photo on Facebook, the proving-ground where everyone’s family looks sort of normal. Found-family, she captions it. She tags me, and I share it to my own page, and my comment is lavish with exclamation marks, the punctuation version of hugs. I have a family. It doesn’t look like everyone’s, but I’m coming to realize: no one’s family looks like everyone’s. Family is just the thing we agree to call each other.

My mother sees the picture, me grinning beside my brother and sister, deciding we are family. According to Facebook, she liked it.

Treena Thibodeau’s work has appeared in Barrelhouse, Pithead Chapel, Hobart, Olit, Atticus Review, The Rumpus, and Vol. 1 Brooklyn, and has received support from the Vermont Studio Center, the Tin House Summer Conference, and the Gulkistan Center in Iceland. She directs the virtual reading series TGI and holds an MFA in fiction from Columbia University.