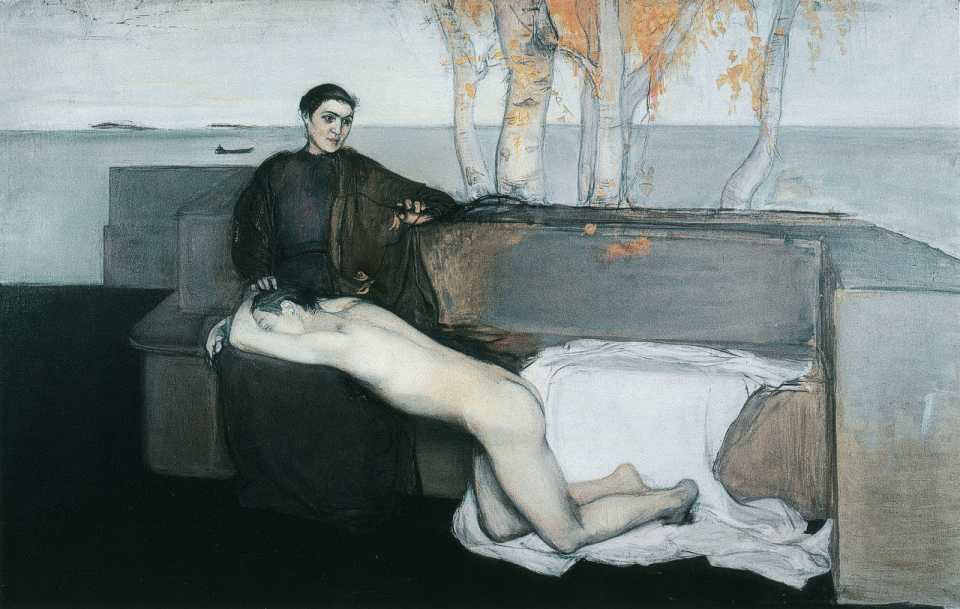 The colors here are always white, blue, tan, but over there they’re gold, the woman says as she crosses one state, another, Mount Blanca now, Sangre de Cristo before, aspen glow caught in the glooming. Now that she’s gone, I’m looking for other deaths in the desert, the valleys between mountain tops removed, the towns between companies and pueblos, but all I see are signs for cattle and UFOs crossing, meadows for broncos, the backsides of their skulls. Where are the other deaths? Where did she empty the carts? Will anyone please collect the dead poets—the one with a black bun, the one with her head in an oven, the one who dressed in wool, the ones who stand in the other room all night long? Can someone please lift this artist and her still-life—wombs, apples, decoys? Can someone please let me kneel before them with beads, prayers, and incense so I may count each one? Now the woman is layering her hands at the sky, the wheel untouched above her knees as she’s telling the other about light. The odometer cruises steady, one hundred and eight miles to go. Spin the prayer wheel. Chat with the cult. Recite “Her Kind” in a gardener’s circle. Say and then sing an “Om” in the temple, she tells us. Of course, we do. We don’t know why we’re here, why we stop at the UFO kitsch tower, why the elysian fields of rabbit grass glow yellow, why the ethereal Great Sand Dunes’ wind at dusk erases all the footsteps before us so we appear as the first, why climbing that one dune’s crest makes us tip our heads back with sound.

With Death at the Funeral Home

Death says, Imagine your funeral. So I do. Sometimes, I make a funeral in my brain, I buzz the fly, I stop the cart. Not many sign in—my parents black holes, my sisters. Death says my light is you. I counter that you are always hiding, hiding under the bed, hiding on the internet, hiding at the office. When I look at you, I see eyes that stare too long. I try explaining about surfaces—a coating of titters, a veneer of small talk, a vapor of social lies. As death walks beside me in a room of show caskets and show urns, faux flowers and plastic monuments, all a little lighter than the real thing, she fingers an ebony box with yellow satin lining, but nods to a silver urn with fluted handles. Carrying bow, axe, and hatchet, she leads me to a dark cornered loveseat where she flips through brochures on planning, plots, down payments. I caress the velvet, trying to breath. She says, I’ll always be on your side. I glance at the bow, axe and hatchet, all still there at rest in her lap. You are, I echo, on my side. The parlor hums with music, the obviousness of two cushions, furniture built for a pair. I am literal. Death is an unknown.

Death spreads my legs and says, I can take you any way that I want.

Anymore, I don’t know why death wants me or why death wakes me to press her bones against my backside. The ringing is incessant now. She has to know this. Morning and midnight, the streetlights are always on, the magpies hold the trees, and if I cross this winter desert meadow, I’ll find the woman with graying teeth who paints black crosses, nude white bodies and cacti, but can’t speak to speak cacti, cholla, or prickly pear. I say over the ringing, You can eat the paddles, when she shows me the man with one on his tongue. Anymore, I don’t know why death presses her hard mouth to mine and tries to maneuver my lips open to steal my breath, to give me the tongue she doesn’t have. I want to tell death that I just can’t couple anymore. I’m not a couple, that her bones are not ones I want to jump, that when she touches me I feel nothing, but I am locked in death’s embrace, knowing she’ll finish me off first.

To Approach Death, I Take a Drink

We have climbed the hills and bluffs, walked the rows, ignored the din of the interstate that spreads its noise like fog over the valley, never burning off, and stopped before the angel of death, this sculpture of a woman with birds. Death water flows from her open palms. Her cement wings are surrounded by October’s green, the grass of toxic spray, the stone monuments to loss. Here among the graves, there are no days of the dead, no carts, only an angel. I turn to you as the traffic screams in six-lanes of concrete and lights, as I reach my hands to cup the water, as I open my lips for a sip, as you lift your camera, uncap, and focus, I say, See if you can capture my death. I want to see her too.

Laura Madeline Wiseman is the author of Queen of the Platform, Sprung, and the collaborative book Intimates and Fools with artist Sally Deskins, as well as two letterpress books, and eight chapbooks, including Spindrift. She is also the editor of Women Write Resistance: Poets Resist Gender Violence. She has a Ph.D. in English from the University of Nebraska-Lincoln and an M.A. in women’s studies from the University of Arizona. Currently, she is a writer-in-residence at the Prairie Center of the Arts.