Things I Did Not Learn From Dead White Male Authors 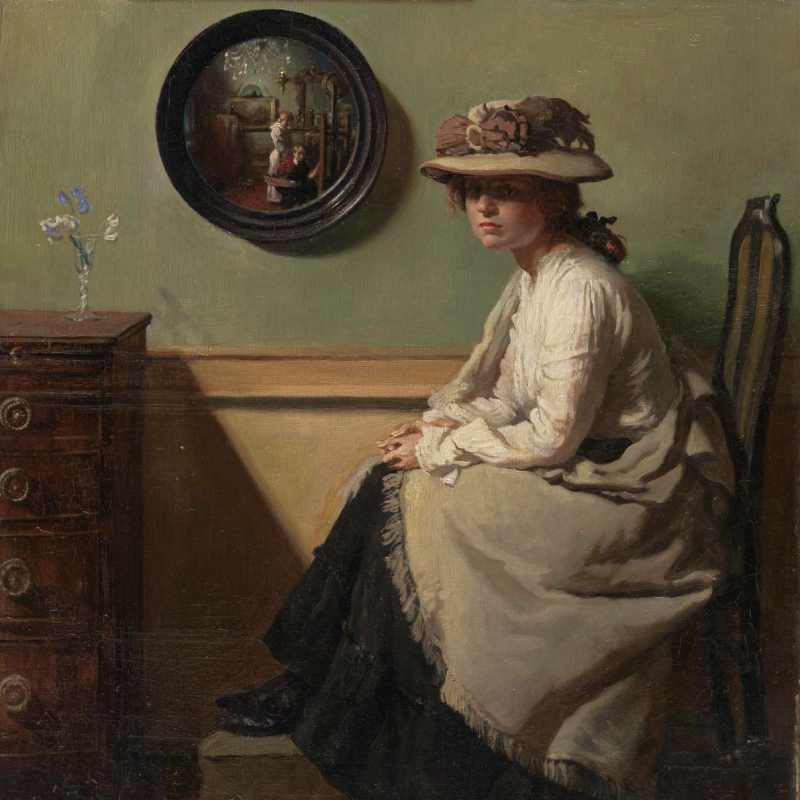 I have loved books by white, male authors. I have stayed up all night with them, avoided studying for the bar exam with them, sought refuge from broken hearts or unrealized dreams with them. Once, I called in sick for them. Still, you can have your lists, your “best of” this or that, you’re New Yorker table of contents with predominantly male contributors. There are things, I believe, you cannot learn from reading the work of white men. There are things, and you must go where you can find them.

Like most second year law students, I interviewed for a summer associate position. This involved scheduled twenty-minute audiences with partners and senior associates, often conducted at hotels, where we sat around a small table and pretended there was not a bed two feet away.

In the middle of my search, I found myself on the threshold of one such hotel room, standing before an African American partner from a prestigious Chicago law firm. It was her last interview of the day, and she looked weary. She motioned for me to sit, and then did the same before glancing at my resume. She sighed. I did not take her protracted exhaling as a good sign, but was in no way prepared for what came next.

“I expected you to be black,” she said bluntly.

I was so caught off guard that I said nothing.

“Okay,” she said, folding her arms. “Tell me why a white girl gets a concentration in African American Studies.”

I’m not sure until that very minute I had thought about why I’d taken so many African American Studies classes at Smith. I just did. But she asked, and I told her the truth.

She nodded and we were quiet for a minute, sitting in the company of things that must be survived. And then we proceeded to talk for more than an hour, despite the twenty minutes we’d been allotted. When we finished, she told me she was calling me back to her firm for further interviews. She never asked me what I’d had to survive. There were things, she seemed to know, and that was enough.

It started with The Color Purple. The book, pinkish-hued, with the simple house on the cover, sat on my mother’s bedside table. I picked it up and was consumed by Celie’s voice, so raw and wounded, so unable to see her own worth. I watched her go from making herself “wood” to withstand her abuse—from saying she didn’t know how to fight, just how to stay alive—to finding a voice, to believing she had the right to use it, to soaring in her own ways by the end of the novel.

In college, I moved on, ravenous, to the description-defying sequel, The Temple of my Familiar. I was certain I had never read such a brilliant book. I was certain I would never read a more brilliant book if I lived to be a thousand years old. It is a frenzy of plot and theme, spanning centuries of racism and struggle, and making the agonizingly obvious and so-often-unheeded argument that it matters whose recollections—whose stories—inform our collective spiritual and political narratives.

Next, I devoured the heart-wrenching Possessing the Secret of Joy about the horrors—plural, so catastrophically plural—of female genital mutilation. I read Walker’s essays and became a vegetarian in one fell swoop sitting outside of a McDonald’s on a pre-law-school road trip. I learned about multiple points of view, about how backstory is done deftly and for maximum effect, about unreliable narrators—unreliable because of wounds, because of suffering, because of the urgent, soiling need to survive.

But there is always a first love, and for me, it was The Color Purple. There are things that have the power to erase us. Celie knows it, and we know it, too. In some ways, The Color Purple’s epistolary form teaches us what we know in our hearts: We can write our way back.

With a voice, we can be.

I was a relatively new Muslim on 9/11. I had been married for four years. I had an adopted three-year-old son and a one-year old daughter. I watched on the news, holding my baby, distracting my toddler, as two planes crashed into the World Trade Center. I wept in the bathroom where my children couldn’t see me. I called friends and family. I worried that more attacks were coming. I didn’t sleep, spending long nights staring at my children and wondering if I could take them in public, or on a plane to see their great-grandparents. I opened the mail outside, with arms stretched in front of me, in case of anthrax. I was frightened, angry, devastated.

I was also now the same religion as the people who did this.

I purchased a giant American flag and hung it outside our house, like proof.

In the tragedy, I lost my ability to criticize the policies of my government. I knew I would be given no benefit of the doubt. I was also aware that simply identifying as a Muslim would be seen as seditious by certain people. I felt my way along this new path of trying to assimilate into the country in which I was born and raised, where I had been a Catholic for 27 years.

This feeling lingered for two years, five, ten. It swam below my surface when I read Mohsin Hamid’s The Reluctant Fundamentalist. I finished the book in one sitting. It is a quick, compelling read, but it is more than that. Hamid dares to create a Pakistani Muslim protagonist, Changez, who, after achieving the American dream, questions its material underpinnings and the global oppression it seems to require.

Whether you agree or disagree with Hamid’s protagonist—who either returns to Pakistan to lecture about the dangers of colonialism, or to foment anti-American sentiment and terror, depending on whether you are a thoughtful reader or the unnamed person to whom Changez tells his story—it is hard to ignore that it was an act of courage for Hamid to write about such a character, to tell such a story, as a young Muslim man in a post-9/11 world.

There are lessons here about speaking out even when people stand ready to make a monster out of you, when entire industries, including “news” organizations, have sprung up to make monsters out of people like you.

I purchased a tee shirt with an identifying slogan—This is what a Muslim feminist looks like—and wore it in public, like proof.

I did not want to pile on.

But there are boxes for women. They can vary by culture or religion or class, but there are always boxes, and I have felt pressed into them.  Before I converted, there was the relentless wrath of the western beauty myth and the ways women are bullied into tolerating inappropriate male behavior and society’s notion that being aggressive in the classroom or the boardroom makes a man admired and a woman a bitch. After I converted, there were new boxes previously absent from my radar. I was told, sometimes by people who barely knew me, what I was supposed to wear (nothing showing my arms or legs), where I could pray (behind the men or in a separate room with noisy children), even where I could eat at a party (with the women, in a different room). When my husband and I were first married, we navigated social gatherings by lingering in kitchens, the architectural neutral zones between where the men and the women ate in separate spaces, until we were shooed back like straying children. I played along more than I’d like to admit.

When I didn’t play along, when I said to someone, for example, that it was possible Islam does not condemn homosexuality and referenced the work of Emory Professor Scott Kugle, she did not speak to me for days.

Still, I wrote the complaints. I told the secrets. I wrote other things, the beautiful things, the affirming things, the ways the women in my community are strong and educated and kind and capable, but I didn’t flinch from writing about the parts that are anti-woman or anti-gay or have made me feel marginalized or small or unseen. I wrote a novel about all of these things. I showed it to a fellow Muslim, long before I had an agent, back when I didn’t necessarily believe I would have an agent. She didn’t look so happy upon finishing. “It’s like you’re telling secrets,” she said. Her words wrapped around me until I thought maybe I was doing more harm than good. I thought maybe I should put the book away. I considered that maybe I should return to the practice of law.

I said this to my best friend during a long walk in an old cemetery. I was melodramatic enough to wallow in the symbolism of our setting. She tried to gently shake the courageous parts of me. “I understand the woman’s point,” she said. “But you can’t give up on this novel.” And then with more conviction, she repeated it.

“You are not going to give up on this novel.”

I read Chimamanda Ngozi Adichie’s Purple Hibiscus, and watched her TED talk, “The Danger of a Single Story.” Simply put, Adichie makes the most eloquent case I’ve ever heard that who gets to tell stories matters, that underrepresented voices need to be heard. But she also speaks to something else: When a member of a stereotyped community tells her “complaints,” some people will extrapolate from the specific to the whole and assume that, say, an abusive Nigerian father is all Nigerian fathers. Similarly, The Color Purple also tells secrets. It depicts violence by black men against black women even though so many white people are already inclined to see such men as violent and culpable, when the risk of piling on is astronomical.

In some ways, Adichie and Walker show us, we must trust the reader to know better, to discern, but even when the reader cannot be trusted, even when the reader will let our words stoke the xenophobic, subtle or not-so-subtle racism in the secret or not-so-secret parts of their hearts, we cannot be limited by those who will use our work for their own purposes, who read their own agendas into our narratives. We must still tell the stories of our experiences, in all of their complicated complexity. Good fiction requires truth, even—or especially—when people do not want it told.

I did not give up on my novel.

The actual color purple, of course, runs thorough Alice Walker’s Pulitzer Prize winning novel. It is the color of Celie’s abuse, a longed-for dress, her sexual organs, her pain. But it is also royalty. It is also beauty. It is also her finding her voice and knowing it is no small thing.

I find this incarnation of the color purple in multicultural fiction, in the bold, beautiful storytelling of writers like Walker and Hamid and Adichie. I spread their words before me, like pieces of a makeshift map. I trace along their courageous paths, understanding, at last, that lessons about writing are so often lessons about life—not just to process what has been, but to navigate what will come.

Jennifer Zobair’s debut novel, Painted Hands, was published by St. Martin’s Press in June, 2013. Her essays have appeared in The Rumpus, The Huffington Post, and elsewhere. She lives in the Boston area with her husband and three children. For more information, please visit www.jenniferzobair.com.