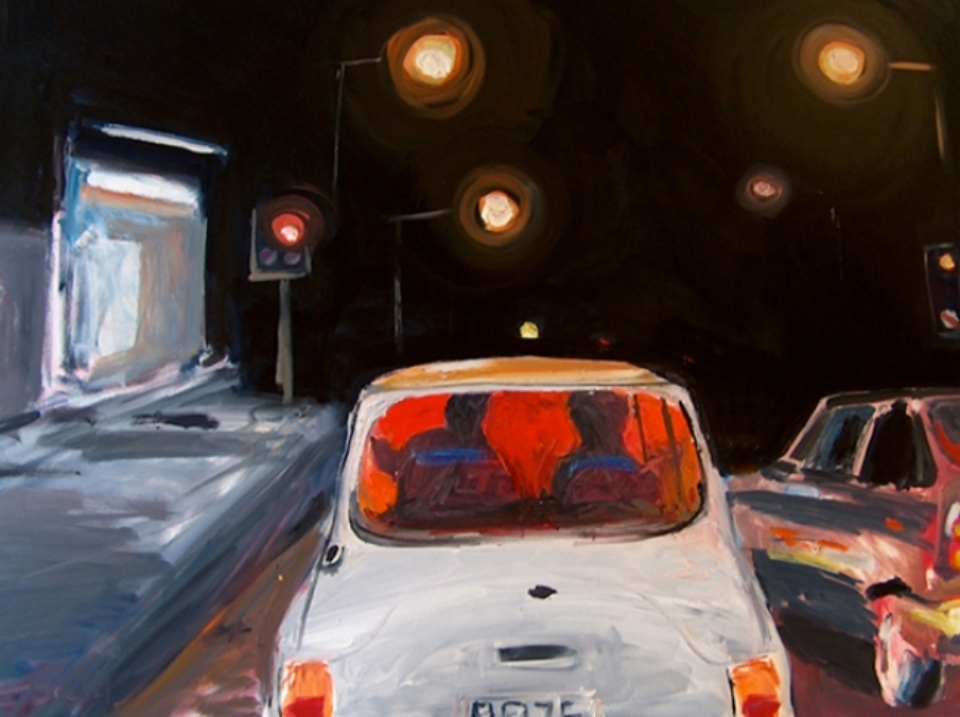 “Traffic,” oil on canvas, by Jessica Brilli, 2006. Used with permission.

Brake lights on a highway. Not her favorite sight. It must be an accident. Or road construction. Either way, it wasn’t right. Not when they were so close to home. Not after their day.

She looked out the passenger window. A blue sedan pulled alongside as her husband Toby tapped the brakes. The driver of the car was looking out. Their eyes collided in the semi-darkness.

Toby, talking on his bluetooth, didn’t hear the sound she made.

The years had altered the driver’s face, but underneath it, he was the same. Same eyes, same lips, same skeptical look arching into incredulity. Christopher.

Toby nudged the car forward. Her hand reached out for a grip, a hold. A gap opened between Christopher’s car and the truck ahead of him. Someone honked a horn. She looked at her husband. She looked to the window. The gap was gone and there he was.

A smile tugged at her face. He was smiling, too; almost against his will, it seemed. She smiled more as his expression turned a somber corner. Her eyes said, “What the fuck?” He shook his head and inched forward.

Reluctantly, was it? She noticed a woman nodding off in the passenger seat, and two kids in the back, watching a DVD. Christopher pulled a full car length ahead of her and Toby. She could see his eyes in the driver’s side mirror, watching her. A green glow suffused the car. Then yellow. Then green again. The seatbelt was snug between her breasts. Too tight, really.

Everything suddenly too tight. And oh God, this was happening. This was all right now.

It made no sense. It made no sense that they should be here, two hundred miles removed from their Indiana life, in a shitty Columbus traffic jam, eleven years after the fact.

Did he live here, too, then?

“Nora said twenty, but I told her that was crazy.”

Her foot pushed a nonexistent pedal. Christopher’s car was two lengths ahead. She couldn’t see his eyes. Was he watching for her? He must be. A stuffed animal of some kind had rigor mortis in the back windshield. There was a bumper sticker she couldn’t make out on the rear left side. The license plate read Michigan.

“Shouldn’t be a problem. Trust me.”

A car from their lane edged in front of Christopher. Toby took advantage. She gripped the arm rest and looked over. He wasn’t looking back. He was speaking to his wife, who had finally stirred. She tried to get a look—a good, gulping look—at the woman’s face, but Toby forged ahead.

They should talk. They should have talked more. They ought to have talked. It was shudderingly obvious: how afraid she’d been to talk. It was not okay that they hadn’t talked. She had things to say. Surprising things she hadn’t given voice to. Silly, dormant things, snapping awake. Brake-lights-on-a-freeway things.

She eased back into her seat. Toby was coasting now. Twenty miles per hour. Twenty-five. The gridlock was breaking up. They’d be gone in a—

The seatbelt yanked her back.

She craned her neck, but it wasn’t necessary. He was there, next to her. Five feet away, if that. Her once-upon-a-time guy. His wife leaned across the middle arm rests, saying something to the kids. He looked over at her, sober now. His hands were tight on the steering wheel.

“Sorry about that, man. We’ve hit a traffic jam here.”

Toby was talking to Ryan. That was his Ryan voice.

The cars were stalled. All that momentum had been a tease. She looked at Chris, and he looked at her. Each second of looking felt long and compressed and leaping and aching. His gaze held hers and would not be shaken. Her breath came fast on the windowpane. She wiped away the fog and touched the side of her nose. After a moment, he touched his own.

It was their sign, their signal, their lighthouse at sea. Rescue me. For the love of God, rescue me from this man, this woman, this never-ending party banter. Take me home again.

She knew this was it. Her once-in-a-lifetime chance. She didn’t care what cost. She wrote three words in the condensation just as Chris’s wife turned to him and gestured. The lane was clearing again. Chris’s jaw tightened, he nodded slightly, and his car lurched forward.

She turned to the road, but kept her fingers on the window, shielding the backward thing she’d scrawled. Toby was talking about football now. He reached over and touched her swollen belly as they passed a broken-down truck in the median. The driver’s face was bleached of expression.

She grasped Toby’s hand in her own and leaned back, her blood a hot noise in her veins, the highway lights pulsing faster and faster, the exit signs looming and sucking by. The world around her was dark and mysterious, endlessly dangerous and shockingly normal.

Chris’s car started to accelerate, and he put more distance between them. This was it, then. In a moment he would be gone. Her eyes swam to the right and she could finally make out, in the roiling darkness, the bumper sticker on his car.

If you’re close enough to read this, don’t be.

Sarah Hina is the author of Plum Blossoms in Paris. She blogs at sarahhina.blogspot.com.