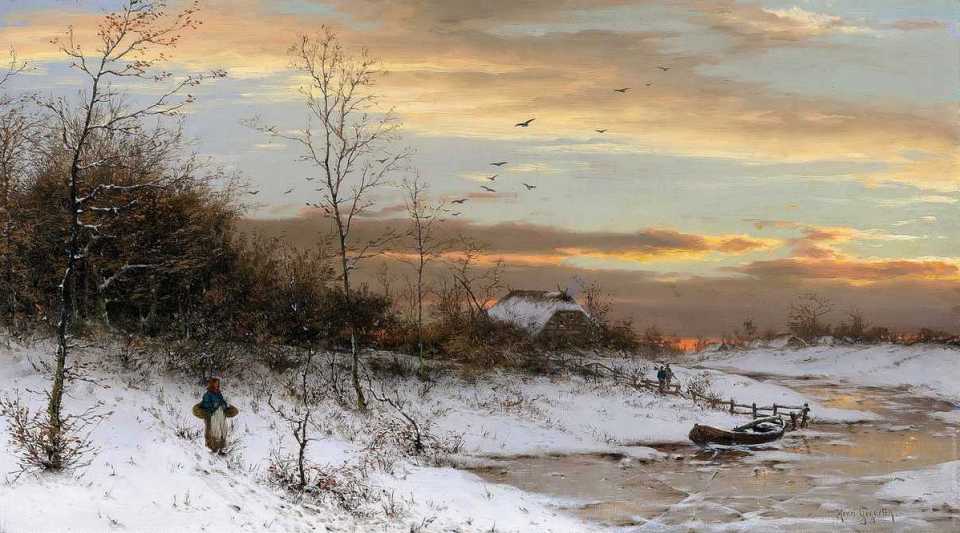 “Sunset Over a Winter Landscape,” oil on panel, by Heinrich Gogarten, n.d.

I’m sure it’s clickbait, a girl pulling and pulling
a line from a hole in the ice for what seems
like an hour but is actually only 3:20 minutes,
and I’m worried she is not wearing gloves
but also excited to see what’s at the end of that line:
a fish, or maybe another of those marriage proposals
looped in jet contrails or glowing in block letters
on Diamond Vision or most recently, shifting
in white pebbles on the bottom of a kettle pond
on the Cape, and after a long time that seems
like an hour but is really only minutes, the ice
explodes into a 30-pound fish, a Great Northern
Atlantic Pike, one long, thick sickle of muscle
taut with panic that knocks the girl entirely over
before shaking the hook loose and flopping back
down into darkness and freedom.

I’m relieved the girl still has all her fingers and also
that it was not an ad, if at the same time
a little disappointed not to see a ring, and I wonder
if writing poetry is like that: a line dropped
into a dark hole cut into ice, with the world maybe
watching and maybe not, but when it does,
always suspecting a scam while you sit patiently
tending the line, willing to risk boredom,
freezing, disappointment, and worse for the chance
at a ring or a great fish ancient and elusive
as time that will nevertheless never impress anyone
as much as it impresses you—and for the chance
that, having been knocked flat and utterly out of yourself,
you might see stars—but that’s what
they say about fishing, right?—It was never about
catching the fish.

Rebecca Foust’s new book, Only, is forthcoming from Four Way Books in Fall 2022. She is the author of three chapbooks including The Unexploded Ordnance Bin, winner of the 2018 Swan Scythe Chapbook Award and four books including Paradise Drive, winner of the Press 53 Award for Poetry. Recognitions include the Pablo Neruda, CP Cavafy, and James Hearst poetry prizes, a 2017-19 Marin Poet Laureateship, and fellowships from The Frost Place, Hedgebrook, MacDowell, and Sewanee. Recent poems appear in The Cincinnati Review, The Hudson Review, Narrative, Ploughshares, Poetry, and elsewhere.