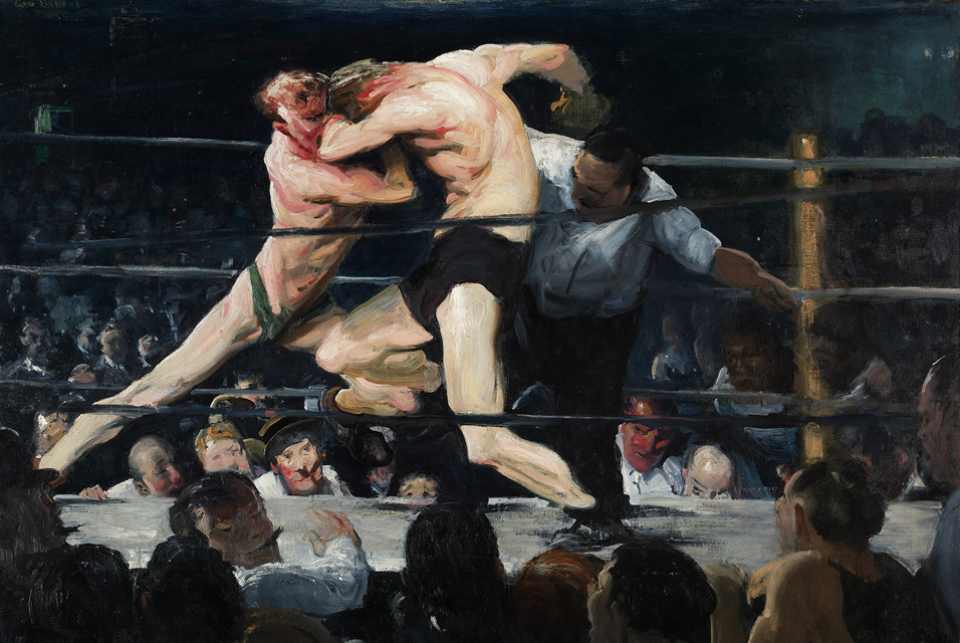 Once upon a time, my Uncle Laurence took me to see Roland Thibodeau fight. I was pretty young, but a boxing match in Scoggin was a rare event, and the appearance of the state heavyweight champion even rarer. Uncle Laurence told my father he thought it would be a shame if any nephew of his passed up the chance to see the champ, and maybe get his autograph to boot. Baseball and basketball games were all right as far as they went, he said, but they were sissy stuff compared to a he-man sport like boxing. Besides, he had a pair of ringside tickets.

Dad was reluctant. His opinion of men who hit each other was roughly the same as his opinion of men who owned guns: they were “ignorant and uncivilized.” In the end he gave in because, I think, he felt it would teach me a lesson to see grown men acting like animals. He didn’t consult my mother before he let me go. “It would only upset her,” Uncle Laurence told me.

I could see why. When we got to the Town Hall, we found the main auditorium had been mostly cleared of seats and a boxing ring set up in the center of it. Tarpaulin covered the floor, and around the ring a huge crowd of men milled about, talking and laughing, smoking cigarettes and cigars and grinding out the butts underfoot. The smoke was so thick, you could hardly see across the width of the hall. I started coughing when we came inside, but then I got used to the bad air, because I had to.

A fight was already in progress when we arrived, a “prelim,” Uncle informed me: two younger boxers just beginning their careers by fighting three-round matches leading up to the main event. It was pretty dull. We stood near the ring and watched a couple of men who looked as if they’d just got out of high school, chasing each other around the ring and sometimes landing a punch or two that didn’t seem to hurt either man. Then a bell rang, and they both sat on stools catty-corner from each other while other men in sweatshirts—“seconds,” Uncle Laurence called them—mopped the fighters’ faces. Then the bell rang, and the chase started all over again.

How old was I then? I was in sixth grade, which meant I was twelve. That was another part of my uncle’s argument: I was “old enough” for the fights.

I was certainly old enough for the prelims. At the end of three rounds, the two boxers touched gloves in the center of the ring, and the referee collected slips of paper from a number of men seated in folding chairs at ringside. Then he announced who had won the fight and lifted the winner’s hand in the air. Some of the spectators clapped, and some booed and whistled, but most of the crowd didn’t seem to be paying attention.

There was a second prelim, and then a third. The crowd of smokers went on milling, bells rang, men whistled or clapped. Uncle bought me a Coke from a concessionaire at the back of the hall, and treated himself to a cardboard cupful of beer.

“When do we see the champion?” I asked.

He had our tickets in his hand, and went off to talk with a big man in a brown suit and vest who seemed to be in charge of a double row of chairs set up around the ring. In a minute he was back.

“Pick any two seats,” Uncle said. He pointed to the front row. “How about those?”

We’d just got settled when there was a commotion at the front of the auditorium—applause, shouting, catcalls, and loud whistles like the kind you make with blades of grass.

“Here he is,” Uncle Laurence said.

Roland Thibodeau was about as tall as I was, but a lot broader, with curly black hair cut short, and bushy black eyebrows that met above his nose, which was wide and flattened out. A shiny black robe, red-trimmed, was draped over his shoulders; when he climbed into the ring, you could read the words “Flash Thibodeau” in thick red capitals—the word “Thibodeau” in smaller letters, so it would fit on the back of the robe. His seconds put a stool out for him, but he didn’t sit—just stood in the corner over the stool with his elbows resting on the top rope of the ring.

His opponent entered, with less commotion and less noise, about a half minute later. He was blond, taller than Thibodeau. His robe was purple, trimmed in yellow, and I wasn’t able to read his name until just before the fight started. He went to the corner opposite and sat down.

The crowd went quiet when a bald man in a tuxedo came to the center of the ring and announced the fighters’ names. Harland “Kid” Hartley was from Dover, New Hampshire, and weighed one hundred and ninety-eight pounds. Roland “Flash” Thibodeau was from Lewiston, Maine, and weighed two hundred and thirteen pounds. There were cheers for Thibodeau, a few boos and whistles for Hartley.

Then the two men met with the referee in the center of the ring. “Kid” Hartley’s face was younger than Thibodeau’s, and his robe wasn’t as shiny—the letters of his name a dull yellow script.

“Hartley’s got a glass jaw,” Uncle said to me. “You watch. Thibodeau’ll finish him fast.”

“It means if you hit him on the chin, he’ll go down like a tree.”

I looked at Hartley. He wasn’t much of a tree. Maybe Uncle Larry knew what he was talking about.

The meeting with the referee seemed serious. Gestures, a nodding of heads and, finally, the two boxers touching gloves and returning to their corners.

When their robes came off, the difference between the two was scary. Hartley was muscular but slender, with blond hair on his chest and under his arms. But Thibodeau looked like an animal, with black hair that seemed to cover his whole body—his chest, back, legs—the coat of an ape or a gorilla.

Uncle Laurence laughed. “But he knows how to punch,” he said.

And I guessed that was true. Thibodeau went at Hartley’s ribs so hard, you could hear the grunts, the exertion from both men. As the round went on, sweat looked the way it did in the funny papers—a spray of tiny droplets dancing off their bodies; you could almost imagine the word Whew! in little balloons over their heads. We were close enough to smell the fight, not only the sweat but the b.o., like something in between bad bathroom odors and a wet dog. As the first round ended and the second began, Thibodeau had raised his punches and was hitting Hartley in the face, bloodying his nose, opening a cut over his left eye. Hartley was coming back at Thibodeau, too, putting a bruise on the champion’s right cheek and making his left eye swell.

I didn’t know if I was enjoying the fight or not. Hartley seemed to be getting hurt; he’d slip inside Thibodeau’s reach and try to hang on—each time, they looked for a moment like two men dancing—but the referee wouldn’t allow it. He’d separate them, and Thibodeau would back away then throw another two or three jabs into Hartley’s face—until Hartley would try again to dance with him.

“He needs those clinches,” Uncle said, “or he’d fall down.”

Between rounds, Hartley’s seconds worked on him, replaced the adhesive plaster above his eye, washing the blood off his face.

By round four, every time Thibodeau hit Hartley, the blood would fly from his damaged nose and spray around the ring. In the third round, the champion forced Hartley against the ropes and pummeled him. The blood flew like a lawn sprinkler. It looked as if Hartley couldn’t lift his arms; you could see his knees sag. He was on the ropes right in front of us, and every time he was hit, he groaned like no animal I’d ever heard.

“The ref better stop this,” my uncle said, “or the champ’ll kill him.”

And the referee finally did manage to pull Thibodeau away and stop the fight. Hartley slid to his knees, then fell face down on the canvas. The referee raised Thibodeau’s right arm and said he was still heavyweight champion of the state of Maine. Most of the crowd cheered and whistled; a few booed. We all headed for the exits.

The fight had lasted almost four rounds and, as Uncle Laurence said, didn’t have much “finesse,” which he explained meant the difference between boxing and punching.

When he brought me home, Ma found out for the first time where he’d taken us. She was upset and angry.

“Look at you,” she said. “My Lord, you’re covered with blood from head to foot.”

And so I was, all spattered with it. From the look of me, you’d have thought I was the one who’d been fighting for the championship. Seeing myself in the bathroom mirror, my face and my white shirt dirty brown with the dried blood of the two fighters, was the best part of that whole evening.

Robley Wilson was editor of The North American Review for 31 years, during which the review won two National Magazine Awards for fiction. He is a prolific author of novels, stories, poems, and anthologies, including Dancing for Men, winner of the Drue Heinz Literature Prize, Kingdoms of the Ordinary, winner of the Agnes Lynch Starrett Prize, Terrible Kisses, a New York Times Notable Book, and A Pleasure Tree, winner of the Society of Midland Authors Poetry Prize. His most recent collection is Who Will Hear Your Secrets? published in 2012 by the Johns Hopkins University Press. He taught creative writing at the University of Northern Iowa from 1963 to 1996 and has been a visiting writer at Beloit College, the University of Iowa, Pitzer College, and the University of Central Florida.