Some Things You’ll Do When You Would Rather Be Happy 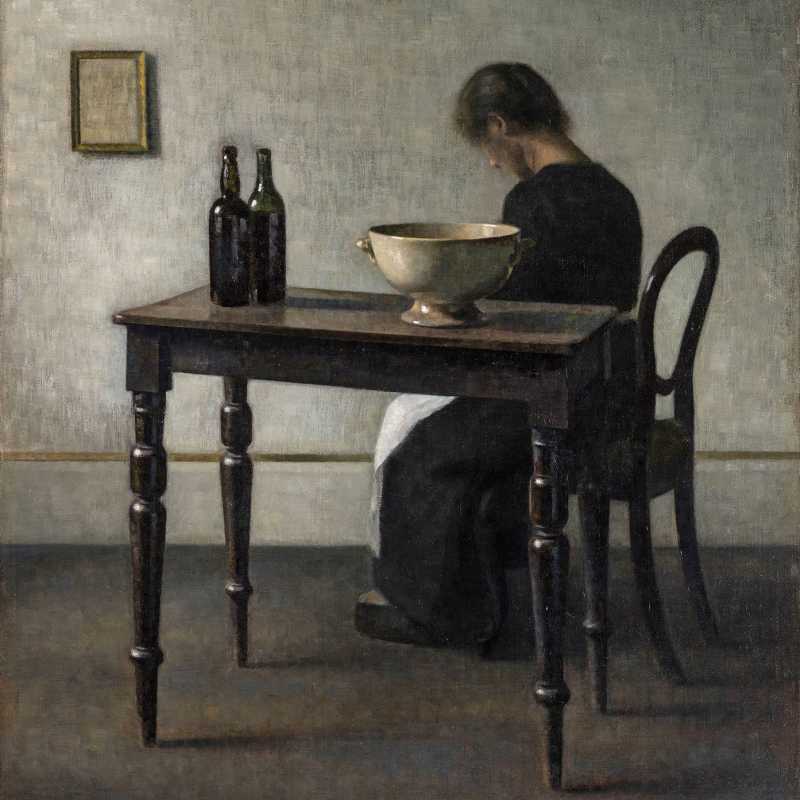 “Interior With Woman Sitting at a Table,” oil on canvas, by Wilhelm Hammershoi, 1910.

You’ll check the mailbox one last time in case there’s an unexpected windfall waiting to pay the mortgage, or an official announcement that the whole thing was a sick joke or that there’s a new technology that can bring someone back to life just like in the movies and your life is not, in fact, forever changed. Today the mailbox is empty.

But before the mailbox, you’ll drive down the dirt road and away from the house one last time looking to see if there are blackberries on the canes, listening to the crunch of rock under tires through the open windows and inhaling the dust deep into your lungs where you invite it to nestle in, to become thickened and scarred over, visible on x-rays as tiny white dots in otherwise translucent flesh. To become a physical part of you.

But before the drive, you’ll lock the red wooden door one last time and pocket the key that you have no intention of handing over to the man at the bank or the eventual new owners but will, instead, wear on a chain around your neck because it is a literal key to your truth and your personhood and the floor plan of your life up to this point. They’ll change the locks anyway.

But before you lock the door, you’ll say goodbye one last time to the dogwood outside the window over the kitchen sink where you learned to peel potatoes, and the fireplace built of stones warmed by the sun on this land and placed by the hands of your grandfather, and the bathtub where your mother bathed each night before bed and where she landed after the fall that preceded the news that she had a mass in her right parietal lobe. This would explain the question about her sobriety when she was pulled over six months earlier.

But before you say goodbye to the dogwood and the fireplace and the bathtub, you’ll say goodbye to your mother one last time as she lies unconscious and numbed by morphine, her skull leasing space to an assassin that doesn’t care about trees or stones or keys or the agony that its residency is causing and will continue to cause once it, and its host, have stopped breathing and are burned to ashes and blown downriver from the edge of the limestone bluff salted with fossils of creatures that are alive only in our memories and imaginations.

Laurie Marshall is a writer and artist working in Northwest Arkansas. She’s a reader for Fractured Lit and Longleaf Review, and her words and art have been published in Emerge Literary Journal, Versification, Bending Genres, Twin Pies Literary, and Flash Frog, among others. This is her first contest win, but she’ll have a longlisted story published in the Bath Flash Fiction Anthology in December 2021. Connect on Twitter @LaurieMMarshall.