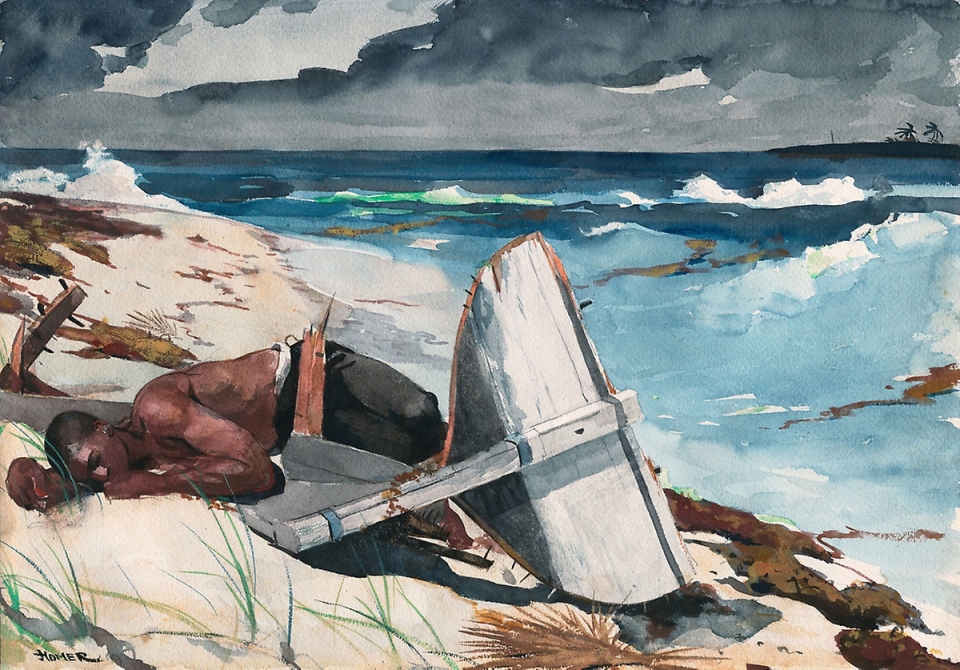 “After the Hurricane,” watercolor, by Winslow Homer, 1899.

A mother-of-pearl mirror-stand, rolled rugs from Damascus, and other brick-a-brac from when I went through my I’m-gay-but-proud-to-be-Syrian bullshit fill the shadows in my garage. Tossed among the clutter, boxes that once held photographs spill their 5×7 guts all over the concrete floor. I throw and twist and rip the best shots, yelling as I obliterate. The remains look like ash piles surrounding my wheelchair.

The award-winning photo of a boulder that in the blue dusk-light could pass for a contemplating superhero—ripped; mallards shaking the wetlands off their wings as they take flight—ripped; a self-portrait of me in my chair—ripped; there’s Hannah Lowman, my one and only girlfriend—ripped. She called me a camel-fucking faggot when I told her the truth.

One picture I have yet to destroy. The sun has slid its warm hand over my shaking shoulder to touch the glass frame. There, my father holds me over his head, one large hand under my chest, the other gripping the blue pajama legs around my knees. Arms stretched like the Superman action figure at my father’s feet, I pose as if I’m about to fly out of the camera shot. I’m laughing, and my father’s teeth shine up at me through his beard.

I search the picture for a kind truth. I can only think of my father, smelling like dirty dishrags on his hospital bed, that fucking word exploding like a suicide-bomber from his lips.

Abomination. He had exactly enough breath to blow out the word before he passed out in his nest of tubes and wires. With one word, my father forbade my mother from signing the papers for the transplant.

I’ve spent my life struggling to belong again, but white lions have no place in brown deserts, and homosexuals don’t belong under God’s sun.

The picture frame clatters on the floor and falls quiet next to the open fuel can. The photo follows one piece at a time. Fumes fill the garage. That pinching smell is the stink of terror beneath sleeping flame. It’s the smell of shame, of my mother begging my father not to burn me alive after he caught me with a boy.

I pick up the can and upend it over my head. Cold streams spread greedily as my clothes grow heavy. I lean my head over the back of my chair, craning my neck to ease the knots in my chest. The splatter of gas against the floor slows to a drip. The green Bic I slide from my jeans is warm and weighty.

The sting in my eyes forces them shut. In the dark of my mind, a memory waits—me soaring in my father’s hands, my caped hero lying at his feet.

I idolized Superman. What wasn’t to admire? Speeding bullets, burning rockets, and getaway cars bounced right off him; a whole DC universe loved him.

The day I lost my action figure, Superman saved the world nine times, riding beneath the creases of my palm. As I flew him on his last adventure, I zoomed outside to put the sky above us. We vanquished butterflies from hedges while Hannah Lowman and her friends played freeze-tag in the street.

Sirens wailed on a distant block and swelled until there wasn’t room left in the neighborhood for playing children. A rust-colored car, sleek and low, squealed around the corner. Hannah’s friends scattered for curbs and porches, but she just covered her mouth and trembled.

I ran toward her.

Muscular steel sped toward us; its sounds tore at me through the asphalt. Its growl pressed against my cheek as gas and hot rubber burned inside my nose.

I shoved Hannah; Superman tumbled after her.

The collision that followed feels like it never stopped. I remember teeth snapping together as the bumper crashed into my hip. Both legs bent toward the sky. My arm swept like a clock-hand across the hood, its hot paint setting me on fire as I burned. I screamed without breath. I flew. Not the powerful flight of my hero, but the tail-spinning collision course of a flaming jet.

Below, the street grew small. The car jumped the curb into my mother’s rose garden, spraying dirt and bricks.

I continued flipping upward, the clouds and my screaming mother on a tilt-a-whirl.

My father later told my nurses, “Take care of my son. He’s a hero.”

I float, no longer tumbling wildly. Wind flaps my ripped shirt like a cape. The flames go cold. I’m Superman. And everybody loves me.

Emile DeWeaver has fiction forthcoming in Nth Degree. He is the creative director of film reviews for the San Quentin News.