Songs We Play When We Pretend We’re Ourselves 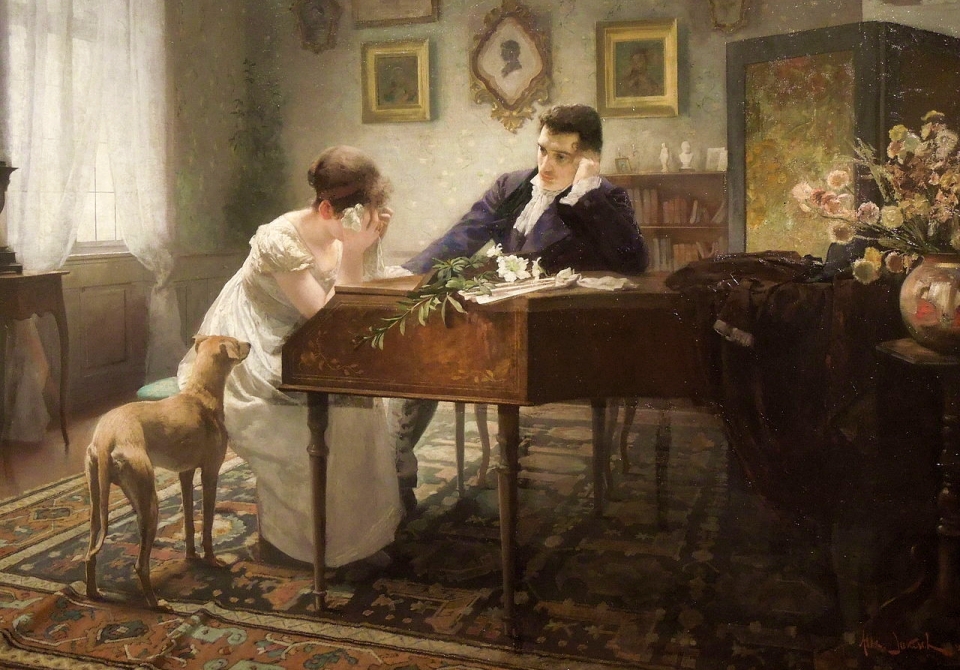 by Benjamin Thomas
I.

There’s a piano player in the restaurant on the night Zoe tells you she’s pregnant. You notice this not because you particularly like piano players but because in that moment, when the words we’re having a baby leave her mouth, the grey-haired man’s aged knuckles begin a hauntingly melodic progression.

Somewhere in that melody comes a truth; until then all the two of you have ever talked about is music. Keyboards. Guitars. Indie rock groups and hip-hop artists. Bands that will never get mainstream recognition but it doesn’t matter because when that diamond needle fits inside its groove, the song plays only for the two of you.

You smile and put your hand on top of hers, rubbing your thumb over her knuckles in a motion that echoes the music.

Zoe’s news—effectively your news—hits you several nights later while you’re walking home. Rather than tread down the same familiar sidewalk, to the same familiar green line MBTA station, you divert course into the nearest bar. Three shots and two craft beers later, you head out, your wallet empty.

She yells when you stumble through the door but it’s a different kind of angry. A shade of red that might not be anger at all but something else, something she never shows. Concern? Jealousy? Whatever it is, hate, hurt, or hollowness, three plates lie in scattered pieces near the front door with a divot in the wall six inches from your head.

When she pauses to take a breath you move and the frustration melts into something that leaves a trail of clothes ending in her bra and your boxers at the foot of the mattress.

Later that night, you lie awake with the brightness of your phone turned all the way down. The window leading to the fire escape is cracked and the outside air beckons. Here’s freedom. You can fly out here. God, it’s tempting. She’d be fine on her own; Zoe’s a smart girl. But something claws at your insides with a guilt-filled ferocity that leaves you lying there, thoughts of vanishing subdued.

Bathed in the glow of your messaging app, you roll over, sheet wrapped around your torso, and text two others. You tell them things have to end. That you aren’t looking for anything more but it was fun while it lasted.

Zoe’s first ultrasound piggybacks the news that you’ve successfully sold an article to Turntable, a retro-styled magazine playing off the comeback of records you grew up pulling from your parents’ shelves while they were at work. Sabbath and Zeppelin. Blue Oyster Cult and their songs about the reaper.

Zoe moves into your studio apartment as it’s slightly larger than her rental and the two of you spend nights sitting on the fire escape talking about places you’ll travel to, cultures you want Andy or Andrea exposed to, meals you’ll cook, stories you’ll read to him or her.

She rests her head on your shoulder, and pulls her tattered sweater sleeves down past her knuckles. A plane takes off from Logan International and banks over Boston. Its engines’ deep howl reverberates in your chest and pulls at you.

As you watch its metal wings glide across the sky, Zoe laces her fingers between yours. The fabric of her sweater warms your skin.

She tells her friends even though it’s far too early for them to know. They get jealous at her happiness and the fact that she never gets sick. But, good things don’t last forever and fairytales aren’t written in graffiti on the walls of I-90.

She asks to meet you at Boston Beer Works after your retail shift. When you walk in you’re expecting nachos with extra salsa but she orders a hard cider without looking at you and breaks down crying when the bartender slides her the glass.

He glares at you like you just hit her but you don’t care because all you can manage to think and do is put your arms around her and give her comfort. When her sobbing subsides, you realize the tremors in your arms aren’t coming from her, but from your own shaking hands. You pull away, share a silent, solemn stare, and start drinking.

Four drinks in something strikes you: you’ve never seen Zoe drunk before. She had seemed buzzed at TJ’s party but it turned out her cousin had been in town and she brought a bit of coke with her.

Zoe lifts her empty glass and signals for another. “I’d ask you where we go from here.” The bartender brings a pint over. Is that five or six? “But I already know. No point in dragging this out when we wouldn’t have gotten this far anyway.”

You look at her in confusion, but know there’s truth to what she’s saying so you don’t bother arguing. What would you say anyway? That she’s wrong? How do you tell her, after what she just went through, that she’s wrong? That things could have worked regardless?

The walk home isn’t filled with words or romantic city noises, but rather with car horns and big-rig brakes. In headlights that sway like lighthouse beams you notice just how much trash is on the sidewalk.

She packs most of her stuff the following weekend while you sit on the fire escape with a coffee cup of cold caffeine, milk, and sugar. Your cell phone is in your hand and there’s a flight leaving Wednesday that will get you far enough west to be able to rent a car and drive to Santa Monica.

You kill the screen and stare up at the gray New England sky. It’s thick each time you inhale. Though that could be the cigarettes that for some reason you still feel compelled to smoke outside despite her no longer being pregnant.

That’s when you see for the first time that it doesn’t matter whether or not the baby is still there. Pregnant belly or no, all you’ve been thinking about is Zoe.

You flick the cigarette, head inside, and stop at the record player on your desk. Grabbing a vinyl from the shelf, you put on an indie band the two of you saw one night in Cambridge. A song about where you end up when you stop thinking of where you should be going.

You pull out things she has already packed until she smacks at your wrists. You pause, wait for her to grab the next thing, and then you throw the suitcase upside down on the floor. She shoves you, but you just smile and start a play fight that leaves a trail of worn clothes on the apartment floor.

Benjamin Thomas earned an MFA from Albertus Magnus College. His debut novel Jack Be Quick is available now from Owl Hollow Press. His short work has appeared in Flash Fiction Online, Crack the Spine, Winter Tales: A Fox Spirit Anthology, and elsewhere. Ben reviews books for Shoreline of Infinity, the hugo-nominated speculative fiction e-zine. He lives in New England and can be reached at bthomas7.weebly.com or @jigsawkid7.