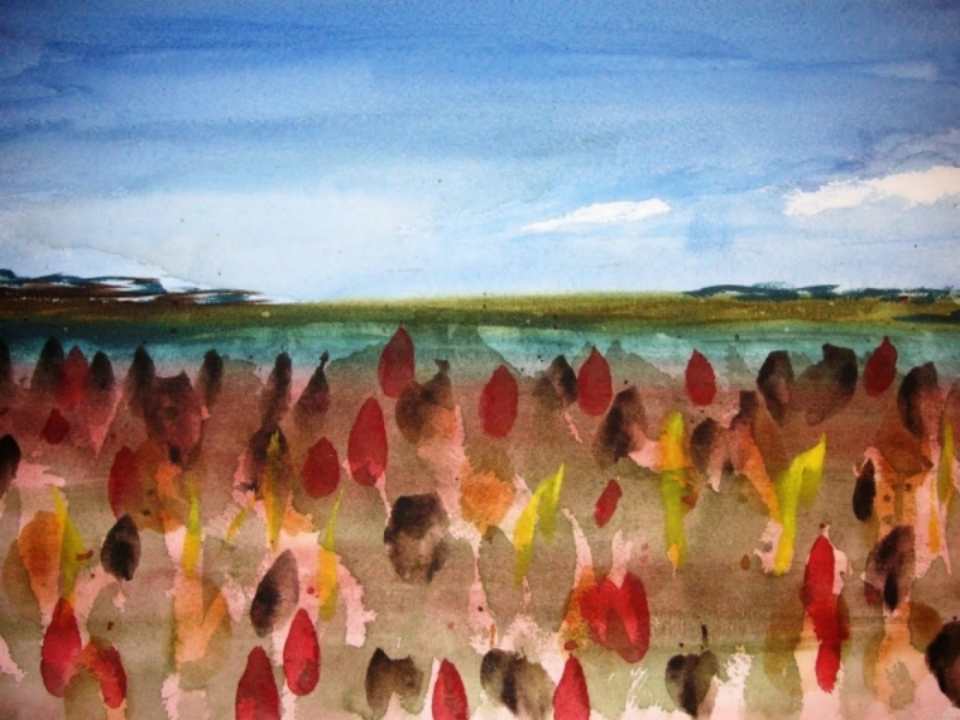 “Forest and Distance,” watercolor on paper, by Roslyn Ross, 2012. Used with permission.

Things began disappearing round about March. Just little things—a newspaper left on a bench, or a sandwich wrapper—and not blown away or tumbled into a corner, just gone. We shrugged collectively: so rubbish vanished—was that even a problem? Then somebody caught an empty beer can in the act and started squawking about it; how it went, like, straight up in the air, man, he said. Wasted, the rest of us said, because he wore big trainers and a hoodie. But almost overnight, YouTube was stuffed with videos of everything from paper clips to small toys vanishing into the sky. Just the ones left outside, mind; the ones indoors stayed put same as always.

After a while, with the streets and parks getting less cluttered, it started to look as if some cosmic recycler had dropped by to tidy us up. So then people stopped using the bins and just hung about with their cameras waiting for their banana skin or whatever to take off. Pretty soon, though, the yawn factor set in, what with the gazillions of uploads and the conspiracy theories, so eventually only little kids, grannies, and the seriously un-cool stuck around to watch any more. From there, it was only a small step to becoming a kind of unspoken utility and people began throwing litter out of their windows to save lugging bags and bins around. This meant you had to watch out for flying items which, when everybody got a bit blasé about it, could be anything from old phones to dead flower arrangements, some of them still in the vase. One man was killed by a sofa landing on him from the twenty second floor and its owner complained to the council about how it was their goddam fault because it never woulda happened if their goddam collection system hadn’ta broken down.

We went on like this for quite a few weeks, with small inanimate objects on the outside of buildings heading skywards and everything else staying put. Then one day a miniature chihuahua was seen hovering at the end of its ten metre extending lead, yapping like they do and its owner yapping too, and people standing around hooting and yaw-hawing and filming it for posterity. This was about the same time NASA got involved, but it wasn’t because of the chihuahua, it was because the ISS had been hit by a fountain pen, captured on video as it penetrated one of the external storage tanks. The gaseous discharge from the gigantic hole it left propelled the station out of orbit and now it was following Voyager into deep space with a trail of domestic debris behind it so it looked like a fourth grader’s collage of a comet.

Not long afterwards, bigger items like bikes and deliveries of wine in twelve bottle cases began disappearing straight upwards, and stuff that hadn’t moved before because it was indoors, started bumping up against people’s ceilings like birthday helium balloons. The ceiling became the go-to place for your missing credit cards and car keys, assuming you hadn’t already lost those by leaving them to one side at a cash point or on top of the car roof at a filling station. For a while, the sky had been full of jangling black dots, clacking plastic that flipped and tipped and reflected the sunlight, and fluttering paper money birds. Now it was full of fridges, those big Marshall amps they have at music festivals, and parking attendants’ huts that hadn’t been fully bedded in.

Chimney stacks, solar panels, large marquees, Smart cars, and Honda Civics went next, prompting a rush on the weightier Saabs, Four-by-Fours, and ex-army personnel carriers. Roofing experts worked over time, some of them entertaining the crowds by catching floating tiles and hammers while they hip-hopped along their scaffolding. And a new breed of specialist, claiming a hot line to The Rapture, started spamming everyone with texts about how, for a donation of only one thousand dollars, they could ensure you got a place in the light—never mind that it wasn’t people that were vanishing, or that the Rapture-ists themselves were struggling to find a rationale that suited their purpose and had gone very quiet about it all.

When it rained, it rained very slowly and made puddles that looked like pillows.

People bought magnets, lead weights, and bits of cast iron and put them in anything moveable to keep it still. Old sea anchors were at a premium, and individuals carrying a bit of excess poundage hired themselves out to sit in things that might be vulnerable to a sudden uplift. One idiot tried to buy heavy water for his fish pond and got arrested as a terrorist. He’d still be on remand if it hadn’t been for the jail disassembling upwards, brick by brick.

Once all the buildings and bridges were gone, along with the cattle and sheep and shrubs, and the boats and submarines and whales, there were only a few of us left—all clinging to trees that were slowly up-rooting, like we were in a massive flood with a current that was sucking everything along to some great overhead ocean.

For a while I had a kind of a neighbour; a woman in a purple skirt dangling upwards from a sycamore tree a few hundred yards away in what used to be our park. When it creaked and shattered and gave way, she went with it and I thought she’d yell or something but she didn’t make a sound. I can’t see anyone else now and I’m hanging here thinking I might be the last and wondering what I should say to mark the occasion: So long and thanks for all the fish? Always look on the bright side of life (ti tum, ti-tum, ti-tum-ti-tum-ti-tum)? It ought to be something profound—

Suzanne Conboy-Hill earned a PhD from University College London and pursued a career in psychology before turning to fiction. Her stories have appeared in Every Day Fiction, Boomunderground, Zouche, The Other Room Journal, Ether Books, and elsewhere.