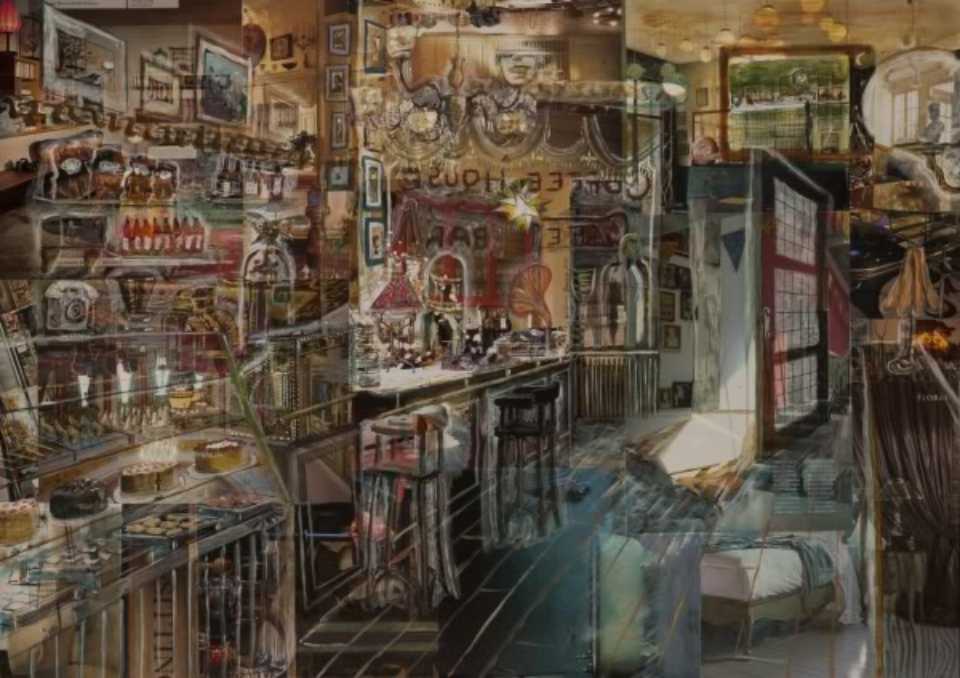 “Bridge Cafe,” mixed media on board, by William Savage, 2011. Used with permission.

Shiitake Happens. Soy to the World. The Girl From Echinacea. The slogans were printed on heavy hemp T-shirts with vegetable dyes. There was of course less control with natural colors and the edges of the letters blurred (“Does that say Boy to the World?”), but who could walk around with chemicals across their chests? Hadn’t everyone read about the effects of toxic dyes on synthetic shirts, not to mention on natural fabrics, in Planet News, Vol. 16, issue 3?

The customers who strolled in after their yoga classes, before their healing sessions (“Did Bahvani look a bit peaked when you went to Reiki this week?”) sometimes chuckled or showed a look of amusement when they saw the shirts hanging above the bulk bins filled with guava chips, organic lentils and kasha. But they weren’t there for apparel, they were there for community (“Did you notice that Sheila keeps cutting Hatha short? It’s supposed to be 90 minutes!”) and sustenance—filet of taro, silken tofu blocks, soy stew. When did bee pollen go up? Even if the prices were inflated, they kept on coming. This meatless heaven was their lifeline.

They were running a vegetarian deli for God’s sake. An oxymoron her father had said, a robust man from the Upper East Side with an insatiable appetite for porterhouse steaks. “This is not a deli!” he declared. “A deli has pastrami. A deli has rye. A deli smells like meat!” he said with arms extended out. After two days in town (his only visit upstate) he was starving and headed back to Amtrak where on the 577 to New York he would buy a hot dog and a side of pork and beans packed tight in a Styrofoam cup in the dining car. Even though he wasn’t allowed to smoke there, he would light up and suck in the carcinogens for as long as his seventy-nine-year old lungs could stand. Tim had held out a wrapped yam burger to him at the station. She saw her father toss it in a can before he stepped on the track. He was getting old. She was getting old. Wasn’t she?

Seitan. Say-tan. Say it tan. Tim was Satan. He was the devil. He had brought her from the city to this small town, this hippie commune where news was a new shipment of wheat-free rigatoni. She should have known. Their first date he had taken her out for a taro fish with a soybean eye. They ate quietly beneath the florescent lights—flimsy tofu drop soup, glutinous puffballs. When she plucked the celery tail off the fish, a loud crunch ran through her ears as her teeth clamped down on the sinewy stalk. She might as well have kissed her life as an urban art historian goodbye then.

It seemed like a lifetime ago when she had feasted on ribs at Ollies in the Village in the middle of the night. She used to wrap herself in fur and step out into the city air feeling like a movie star or at least a woman warm enough to make it from Chelsea to Midtown on foot. Now she was a decade older and married to a man who thought dining on a pumpkin-colored unswimmable fish was a luxury.

Tim had told her to “wrap” that day. She stood at the station across from the overlit counter. He was smiling, using a meat slicer for the Ham I Am that crumbled as it fell into the recycled butcher paper. His teeth glistened from the all-natural paste, his hair bright from the henna enhancer. She tried to concentrate on the small homemade wrapped packages. Packages that if they were handed out on Halloween, kids wouldn’t be allowed to eat. They trusted her Saran wrapping (actually, Eco-wrapping). For all they knew, she could stick a pin, a razor blade, a trace of arsenic into the packets. But this was a health food store, a vegetarian deli, no one thought of such things. They were too busy deep breathing. They were busy finding their chakras. They were planning trips to swim with dolphins.

In the overlit shop (wasn’t anyone concerned with fluorescent lighting?) smelling of dusty grains and environmentally sound cleaning fluids, she reached into her recycled tote bag (an anniversary present) and pulled out the small sac filled with thin, almost translucent sliced pieces of honey-roasted turkey breast, bought from the Supermart on Elm Street. She brought her nose down and let it hover above the golden meat. She inhaled its sweet and toasty smell.

She is a girl sitting on her father’s lap. He holds a hero. Father takes a bite, clamping his champion teeth around the crusty bread, puncturing the soft dough, hitting the layers and layers of salty red meat. He hands the sandwich to her. Her mouth grows large, larger than the sandwich itself. She feels like she can breathe. Air! She takes a bite and swallows the hero whole, finally feeling satisfied.

She would say it was an accident. A mix-up. A cruel joke on the part of the delivery service. She would say, “Seitan made me do it!”

She had piled the prepared sandwiches into low towers under a label stating which luncheon “meat” category the sandwich fell into. Who would guess that the delicate ivory slices were once from a living, breathing animal? They looked just right next to the gluten salami, the soy bologna. Will the real meat please stand up!

She knew what would happen. They would say it tasted just like meat, and isn’t that what they all wanted? She would confess to the junk food cravings, that they made her do it—greasy hoagies and pizza encrusted with cheese dolloped with small lumps of peppery sausage had spoken to her. The hot buttered kasha balls, the figs in a blanket, only made her more desperate for food dripping in thick grease, in lard—let’s face it, in animal fat. She was overpowered. Yes, that’s what she would tell him, but first she would wait for them to sink their teeth into the slivered meat, and they would feast, not knowing what had gotten into them.

Anna Mantzaris covers travel, food, and the arts for magazines, newspapers and the web. Her work has appeared or is forthcoming in McSweeney’s, Salon, The Cortland Review, The Sand Canyon Review, Budget Travel, Fodor’s and USA Weekend. She has been on staff at the San Francisco Chronicle, St. Martin’s Press and Weldon Owen Publishing. She is a regular reviewer for Publishers Weekly, as well as a contributor/editor to several travel guides. She was awarded writer-in-residence fellowships for her fiction by Hedgebrook and the Kimmel Harding Nelson Center for the Arts. She teaches writing at Berkeley City College.