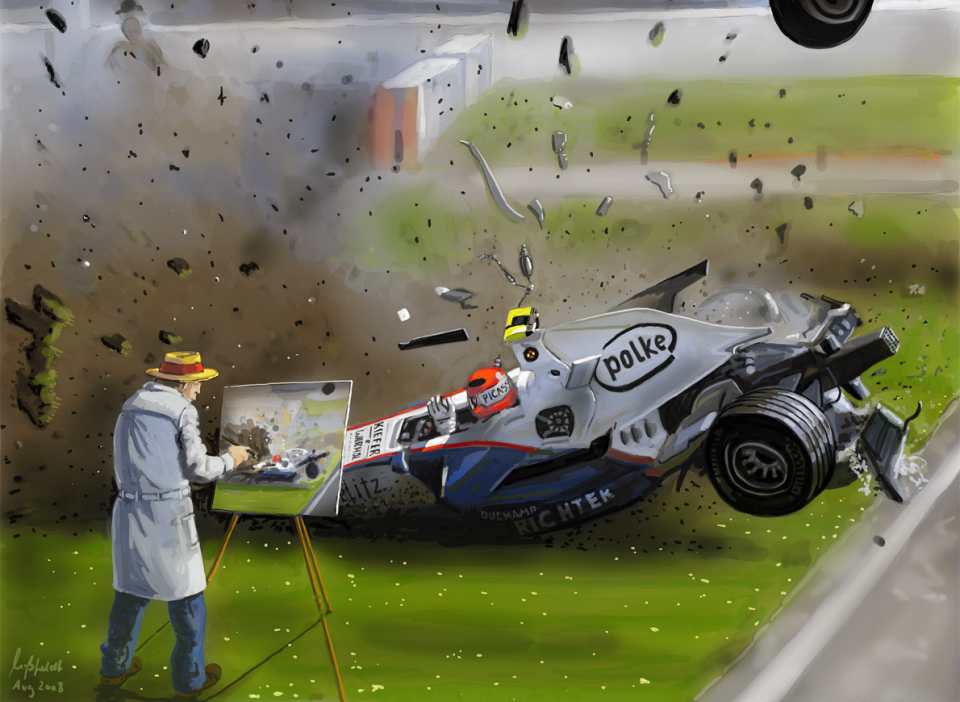 Whenever someone asks me, “So, what do you do?” I like to say, “I am a crash test dummy tech for the National Highway Traffic Safety folks.”

I throw in the word “folks” so that I sound likeable and easy-going.

Then I say, “I am the one who pulls the dummies out of the cars and measures the indentations in their heads and collarbone—you know, where the seat belt pulls. It’s like an autopsy.”

None of this is true, of course, but you would be amazed at how much respect people give me. Naturally, the next question is, “So, which car is the safest?”

I can see they are hoping I will name their car. Usually, though, I like to answer, “Well, the 1989 Lincoln Town Car—Cartier Edition—set the bar, and nothing’s compared since. But last year’s BMW 5 series was a real trooper, and this year’s Ford F 250 is just terrific.”

This is spoken with solemnity, as though the crash test dummies and I are making America’s highways and byways safer for all good citizens. Or folks.

I have not always been a crash test dummy imposter; for a few years in the 90s I professed to being a larval researcher at an entomology lab. My area of study was very specific: maggots, the larvae of Diptera brachyceran. (I enunciated clearly, and by giving the maggot a Latin name, I elevated its status from repugnant to scholarly.)

I would say, “They are actually a superior form of posthumous protein. Very edible, if you are hard up for meat. Hey, why should buzzards be the only creatures to feast, right?”

I have found that the more peculiar the job, the more politely people behave; they try not to seem judgmental. Inevitably, though, they do not make eye contact.

Today, as I turned over stones in the back yard, looking for grubs, seated on the patio with me were my dummies, dressed in spring attire.

Ethel, in gingham, has half a head; her air bag failed to deploy and she went face first into the steering wheel at 60 mph.

Roddy, wearing a sporty shirt and straw boater, has a crumpled left arm and shoulder from a side impact collision. As fortune would have it, he’s right-handed, so there’s a mercy.

And Simon, in seersucker pants and jacket, got tossed east and west on impact because his seat belt was defective. He bounced all over the front seat like a hollow-point .22 bullet does in the soft tissue of your midsection. Boing-a boing-a boing-a. So he’s pretty much what you’d call a vegetable.

Alas, all three of them are auto-phobic now. Can’t take them anywhere. If I have to go on a long trip, I will wrestle Ethel into the passenger seat so that I can take advantage of the fast, un-crowded high-occupancy lane reserved for two or more riders.

Otherwise, they sit around the house and keep me company, and the neighbors who look out their windows in our direction see only an agreeable foursome. I rescued them from a dumpster behind a test lab, some years back, with the intention of providing brief foster care.

But they grew dear, and now they live—in the cheery parlance of animal adoption circles—in their loving “Forever Home.”

Gita M. Smith is a former reporter at the Atlanta Journal-Constitution and a founding member of House of Writers, an international flash fiction group. In 2013 she won Spinetingler Magazine’s Best Short Story on the Web award for “The Tractor Thief’s Jacket.” Originally from Montreal, she presently works at a university in Alabama, helping students become better writers.