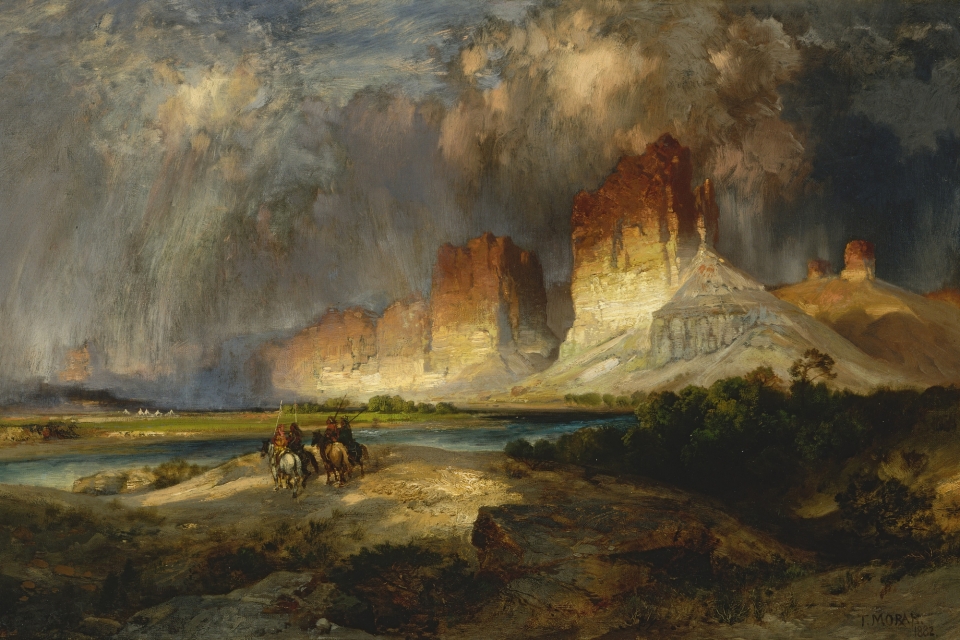 “Cliffs of the Upper Colorado River,” oil on canvas, by Thomas Moran, 1882.

The family portrait sits framed on my dresser
along with the other artifacts from before my time.
1942. You look about as old as the century, with
a small girl on your lap and a row of healthy sons standing
behind you. The patience it must have taken
to see fourteen people from infancy to adulthood.
I almost don’t believe that number, even though the picture
is right in front of me in ghostly black and white:
the saddle-dark skin, the high cheekbones, the prominent hook nose.
Francisco, whom the Anglos called “Frank.”
Would you believe they laugh at me because of the name
we share?

I want to ask you about the time you bought a rifle
only to return it the next day claiming it wouldn’t fire.
The shop owner could find nothing wrong with it
but you told him to keep it anyway. I like to think
it was because you didn’t have the stomach for rabbit hunting.
I want the complete story of how you escaped Pancho’s mercenaries,
who had used lead instead of gold to convince you to ride with them.
I can see you running away from the hillside camp,
away from the fire they used to cook your horse,
out into the solitude of a cold desert night.
Sometimes I wonder how much of my life I owe
to a stingy gunman who didn’t want to waste a bullet
on a scared kid. I wonder what would have become of me
if you had decided to return to the village instead of coming north,
if you had never wetted your hair in the fabled waters of the Rio Grande.

I wonder what you would think about the fact that
I was once a joke among workers in a dirty factory where
they paid me minimum wage to scrub shit and pick pubic hairs out
of urinals. I wonder what you would think about me taking four years
to earn an Associate’s Degree. Or if that would even register.
I wonder what it feels like to die; to feel the rhythm of your body
fall to rest as you watch your final breath dissipate,
to speak only through dreams and the grainy film of memory.
I can’t say I miss a man who died years before
my father was born. I would put flowers on your grave
but I have no idea where you are buried and I am
not sure there is anyone still alive who could even tell me.
I guess if I could give you anything I would like you to have
the memory of a time I looked outside during an October rainstorm
to see a stray cat huddled under a car, fur dark with streaks of oil,
and eyes smoldering like dead stars against the indifference of the cold
and the falling bits of grey sky.

Mark Ramirez is from the American Midwest. His great-grandfather was conscripted into Pancho Villa’s army. Previous work appears in Red Fez.