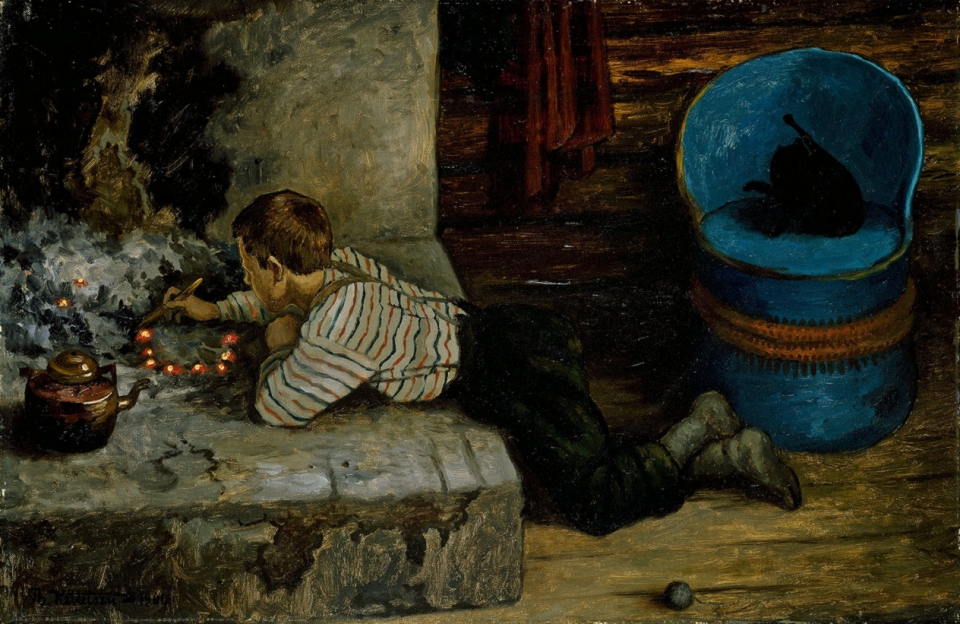 “The Ash Lad Poking in the Ashes,” oil on canvas, by Theodor Kittelsen, 1900.

Inside the ovaries of my husband’s grandmother, Sylvie, resided an egg the size of a grain of sand that would have been Hannah, my brilliant and accomplished mother-in-law, proficient in five languages and fluent in three. And, as girl babies are born with all the eggs they will ever have, granular Hannah was carrying all the eggs she would never be born with inside her infinitesimal ovaries. One of those specks was my Joshua.

Sylvie was killed the same week that Anne Frank perished from Typhus, which was also the week before liberation at Bergen-Belsen. And so, with Sylvie, perished the ovary, and all the eggs inside it, and all the grandchildren that would follow.

That’s how Joshua and I came to never meet in 1984 at my Socialist-Zionist summer camp. If we had, we would have avoided each other for the first three weeks of camp anyway, a subconscious protection from an adult future for which we were not ready. Inside my 12-year-old body, a body I never thought about unless a scab itched my leg or a smart alek put ice down the back of my shirt, nested an ovary, and inside that ovary lay all the eggs I would ever have. Two of those eggs—eggs that would inconveniently give me cramps and drop into my underwear one morning in my mid-thirties—were our twins, Ruby and Gabriel. Joshua and I were not ready for all of that and so we barely looked each other in the eye.

On the last Shabbat of the summer, the night deferred hookups came due, Joshua would ask me to take a walk with him by the lake. There, we’d kiss for the first time, tentatively letting our tongues touch, and his breath would be hotter than I was expecting and I’d picture the steam that rose from manholes and how, as a child, my mother believed they were heating the city, and then, as he pushed his mouth a little harder against mine, I’d wonder if that pushiness distinguished a girl kiss from a boy kiss.

We’d lose touch. Or we’d date another three consecutive years. We’d marry young, on a kibbutz, poster children for the Movement. Scratch that. We’d meet again in our late twenties when he was catering a public relations luncheon I was attending for Pfizer. Or he’d see my online dating profile and suggest we catch up. At first, I wouldn’t be able to get past his Long Island accent and, though he couldn’t verbalize it until much later, he’d be put off by my resistance to adventure and my fear of anything that dramatically altered my body temperature. At first, I’d be dazzled by how wise he’d grown, how intentional he was about building a relationship together. At first, I thought I could push him away with words hurtful and spectacularly true. At first, I was hesitant to date a Jewish man, insisting that it was my biological imperative to mate outside the stagnant waters of the Ashkenazi gene pool. At first, I couldn’t believe how lucky I was to have found him. At first, it was casual. At first, I was painfully jealous of his previous girlfriend, convinced that he worshiped her body in a way he never would mine. At first, we’d debate whether to abort the long-awaited fetus diagnosed with Gaucher disease. At first, we’d travel together to Honduras and we’d break up the moment we returned. At first, people would think we were brother and sister and we’d shock them with almost pornographic PDA.

That’s how Sylvie’s chromosomes would fail to entwine with mine. There was an empty bunk bed in the boy’s cabin, mainly used for drying towels when it was raining outside. I’d sit in their cabin watching them play Crazy Eights, half waiting to be kicked out, and I would be very, very still, listening for my Joshua.

Jordana Jacobs is a writer and secondary school English teacher living in Brooklyn, NY. Her work has been produced at The Ensemble Studio Theatre in New York City, and she has studied at The Writer’s Studio. This is her first published story.