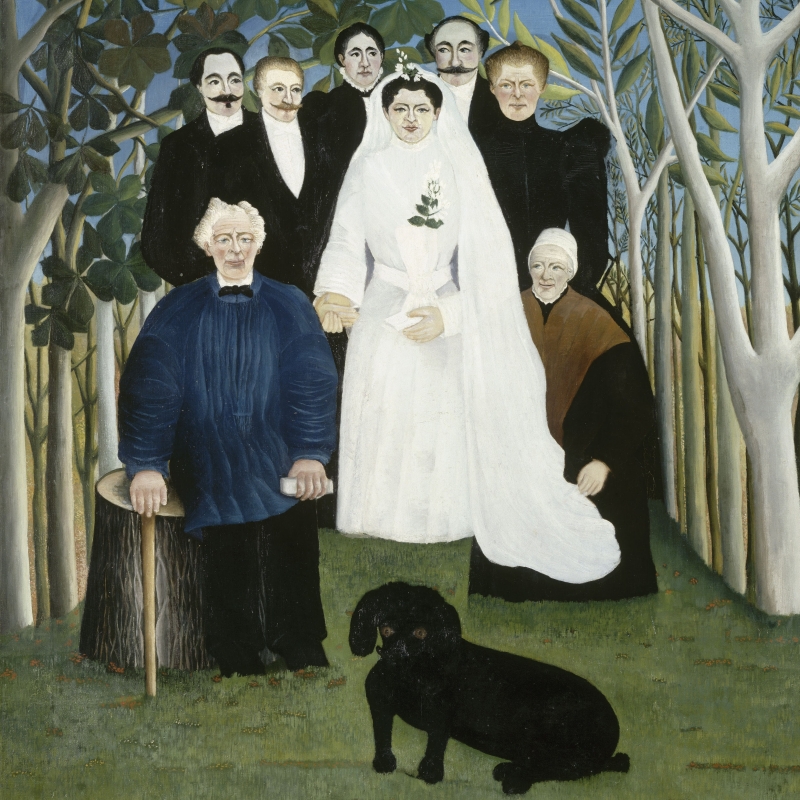 Let’s make a wedding photo, you and I.
I’m blind and you weren’t there, but between us
we can do this. First we’ll delete my brother’s
weird brother-in-law, who turned up uninvited
and stalked the ceremony with his big video camera.
There’s the bride, her long dark hair running wild
in the steam-bath of a June noon, lavender
dress giving no hint of the scene an hour ago
when I crouched Iwo Jima style behind her slender back
and tried to raise the zipper while the maid
of honor held the two sides together. There are the kids
with plastic bubble bottles, dipping the ring-tipped wands
into rainbow-tinted slick soap-water.

In the middle stands the silver-haired judge,
solemn and festive in his sky-blue shirt, theatrical
baritone so rich it might have calories.
Well, he’s not actually a judge, the real judge
has been sent off by her lackwit clerk to some Japanese garden
in the suburbs. This is our actor friend Charles, emergency
stand-in leading us in ad-libbed vows,
earning our gratitude and a story he’ll tell for years at parties.

He was a man’s man, our Charles. I saw him—I
could see then—as Billy Budd on an old Broadway poster,
chest gleaming amid the tatters of a sailor’s uniform.
He cut a fine figure even at eighty, when
the cancer came
to eat his bones and spit out oblivion.
Terry used to say, “I should go first, Charles
would know how to spend my money,” but he was gone
before the world changed, before he could have married
Terry instead of only marrying us.

Thunder woke us that day, and the hammering of rain
above our attic bedroom. We wished for a moment
that we were the kind of people who make plans
for what to do if it rains, beyond “We’ll run for it
and meet up later at the Chinese restaurant.”

Today there is no thunder—everything that falls
falls silently, lies mute until I feel
its squeaky crunch beneath my boot. No azure,
no lavender even for you, Sighted Reader.
Near the end, to distract him from the pain, they asked
about his childhood in Duluth. “The snow,” he said,
“I loved the snow.”

Roy White is a blind person who lives in Saint Paul with a lovely woman and a handsome dog. His poems and essays have appeared or are forthcoming in BOAAT Journal, Tinderbox, Terrain.org, and elsewhere, and he blogs at lippenheimer.wordpress.com.