Like almost everyone in America, I first encountered the puzzle that is The Great Gatsby in high school. Alongside The Catcher in the Rye and Great Expectations, Gatsby was filled with yet another long list of characters wringing hands and whining about their lives, determined not to take a hand in their own destiny. I hated it. I couldn’t believe the teachers were enamored of such banal bullshit and I let them know in my scorching book reports, which received comments consisting of, “Interesting!” and, “Hmm.”

When I say the book is funny, I mean the way the inane conversations on the patios and gardens and pools of West Egg circle round upon themselves and weave in and out of the snide remarks of Nick and Jordan. I didn’t have the attention span to laugh at those sorts of jokes—the butler’s nose and the like. It isn’t that Fitzgerald is particularly subtle, either, but he does require readers to pay attention. 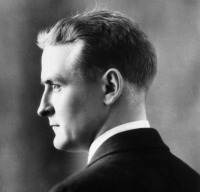 When I say the book is tragic, that part is self-evident. As he prepares his tale for its ending, Nick Carraway, the book’s unreliable narrator, uses the word holocaust to describe the carnage. Even though Gatsby was written years before the Holocaust we associate with the word today, he can’t have chosen the word lightly. And it’s because his condemnation, with all its buoyant violence and alcoholic malaise, is deadly serious. I didn’t know what serious was at 17. I was more concerned with what I sounded like when I talked about the book. I’m horrified to realize this made me more like the characters in the book than I could have comprehended. (And all the English teachers had a good laugh.)

Most of the characters in Gatsby are screwing at least one of the others, sometimes more than one, which sets up a new sort of normal—not one that I was terribly comfortable with in my small town Montana upbringing. I didn’t find any more comfort with it this time, though I was certainly more annoyed than shocked. Tom is married to Daisy but screwing Myrtle and Daisy is married to Tom and screwing Gatsby. Meanwhile, Nick and Jordan are trying to have a relationship which we know won’t work from page one. However, I didn’t know that in High School. I didn’t know what a train wreck looked like coming from a mile away. FYI, It looks like a green light.

For good or bad, the current me was more affected by the violence of the story. Real life has now introduced me to women who’ve had their noses broken by the Tom Buchanans of the world, and the desperation of his mistress, Myrtle, is painful and maddening as she begs to be a part of the in crowd, no matter how she’s punished physically.

At seventeen, I was convinced Gatsby was a story about vapid, rich people. What the story really uncovers is a tragedy about a poor man in love who pays the ultimate price for a shitty dream. That dream is the worst part about reading Gatsby as an adult. I wanted to rip out the pages and yell, “Hey, you idiot, she’s the wrong dream. It’ll never work.” I wanted to scream at Myrtle, too, “You’ve got a nice guy at that garage in the burbs. All you’ve got in Manhattan is an expensive dress you have to claim you don’t want. And now it’s all bloody.”

Myrtle Wilson’s significance as the sole bearer of the book’s violence—as well as the chilling imagery of the blood all over her cream dress—is missing in Baz Luhrmann’s new film adaptation. Myrtle is discarded after being socked in her red flapper frock, shoved aside until she’s needed for the “driving towards death” scene. I’m not complaining, though, because Luhrmann sacrifices things for a reason.

The movie is visually superlative. It didn’t feel for even a second like a two plus hour movie. The pacing was excellent and we were dropped into the story a couple of chapters in, the beginning exposition covered by a tidy tweak of Nick writing his account from a sanitarium after the fact. But, in the film version, Nick is simply a messenger. His relationship with Jordan is completely unexplored. While the book was wild with plot lines and protagonists, the film is about Gatsby and only Gatsby. 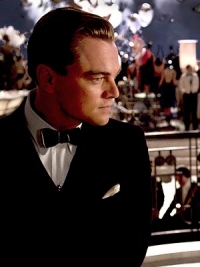 Jay Gatsby, played of course by Leonardo DiCaprio in all of his aging smolder, is painted for immediate consumption. In order to infer the distaste old money felt about new, the filmmakers enhanced Gatsby’s criminal connections and dealings with the sooty underbelly of high society. Furthermore, instead of subtle inferences of looking as if he’d killed a man, Gatsby in film is vulnerable, nervous; prone to violent outbursts and fidgeting neuroses. But this focus on Gatsby himself, absent of the lens of Nick’s own life and moral waffling, does a better job of hammering home the book’s most searing indictments.

Consider wide-angle shots of the big yellow car zooming through the wasteland under the eyes of God or TJ Eckleburg past the folks who make the glitz and glamour possible. Dr. Eckleburg, God, and even the characters themselves spool in and out of the landscape, a dizzying affect that is heightened by the sensory overload provided by the lavish sets. You’re supposed to feel nauseous and by the end you do. It’s too much, too fast, and just in case you didn’t get the gist of what was happening, the narrator provides the occasional heavy handed tweak (complete on-screen text) to the original narrative to cater to dense 21st century sensibilities.

I’ll concede, though, that Luhrmann and his crew had to beat us over the head. They had to remove some of the subtlety. They had to give us Jay-Z and Beyoncé and Florence and the Machine overlaid on the music of the 20s. They had to do this because of who we are as a collective audience.

When I exited the theater, I did so behind a gaggle of young women whose reaction was “That was so sad. I mean he gave her all of those things! How could she not go with him when he gave her all of those things!” These girls did not watch a cautionary tale that life without love is emptiness. They did not conclude that life lived for a single goal is folly. They did not realize that life without hope is death. They did not conclude that Daisy—selfish and miserable and simpering, as portrayed by Carey Mulligan—would never have gone with Gatsby, not five years earlier and not at the end of the movie. They did not weep over the fact that Gatsby would have died in soul instead of in body because she was never going to call; that his murder was the only possible end—one might argue a mercy—for one who’d never lived without said dream. “All those things,” one repeated. “All those pretty things.”

The problem—and the ultimate dark joke of the book—is that very few of us are worth Gatsby (the person or the story). Very few of us are worth the book or the characters or the whole rotten crowd. Some of us are too young. Some of us just don’t want to think that hard. Because we latch on to the shiny. We latch on to the Gatsby parties so we can dress up and drink ourselves stupid. Moonshine for sale in the grocery store, vintage clothing and tchotchkes from fab.com in my inbox. Look how fun that is, we say. We don’t say, holy shit—this is us one hundred years ago and so little has changed. CNN shows all the Long Island estates comparable to Gatsby’s, How to Set Gatsby’s Table, Modern Day Gatsbys, and on and on.

The uncomfortable mess left at the end of Gatsby is tough to untangle, especially for those of us who expect our endings neatly packaged into some sort of fortune cookie platitude. Luhrmann explores Nick’s desperation to find someone to care about Gatsby after his death, though the movie avoids the funeral and the puzzling juxtaposition of Owl Eyes and Gatsby’s father. The movie ties up most of the loose ends as Nick finishes his brilliant manuscript and is, we assume, cured of the haunting emptiness of the life he had lived and the friend he had lost.

Gatsby teaches us lessons we’ll all learn in time. How things cannot make us whole. How life and, sometimes, love will leave us breathless and bereft. How our singular dreams can make nooses for our happiness. May we be old enough to learn these lessons, wise enough to know when we missed them the first time, and worthy enough to celebrate that elusive hope waiting for us in the distance.

Camille Griep is a writer based in Seattle, Washington. She serves as a reader for The Lascaux Review and Program Chair on the board of Cascade Writers. Find her on Twitter @CamilleTheGriep.