Freddy Krueger is Not Real: the Dream of a Burn Survivor 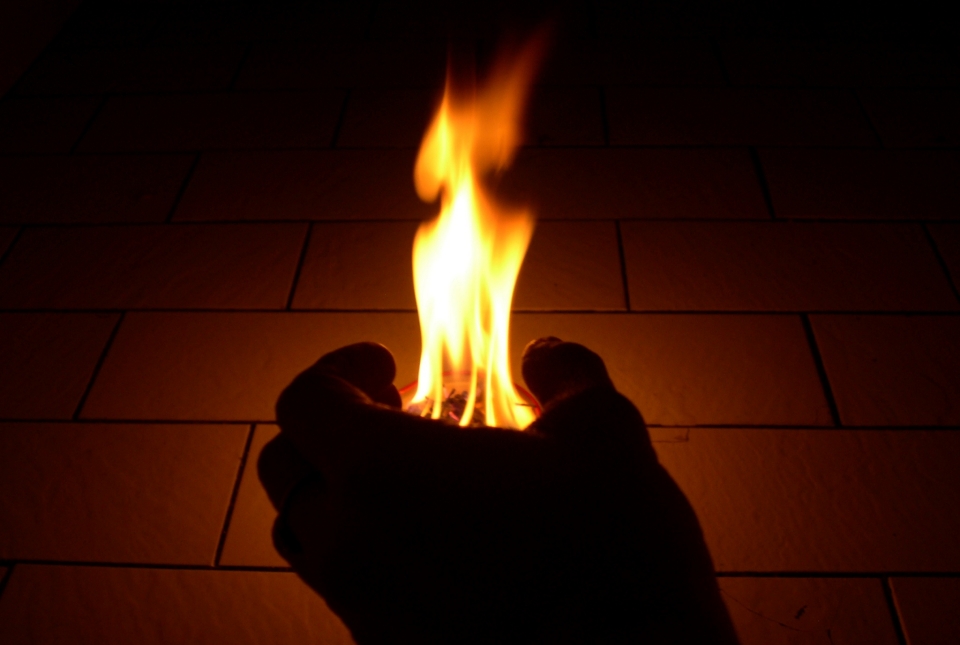 “Fire,” photograph from the series “Playing With Fire,” by Sarah Venturi, 2009.

In the early 90s my older brother kept a cardboard cutout of Freddy Krueger in the darkest corner of his bedroom. Twice my height, this nightmare demon towered over me with a realistic grin and gaping overcooked skin. I was horrified, and yet pulled in by that festering face, those knife-fingers drawn open like a geisha fan. Why did he seem so pleased with himself? Maybe the scariest part about him was that he wore his scars like a trophy.

Whenever I walked past my brother’s open door at night and the lights were off, I knew not to look inside because even a peripheral glimpse would send me running down the stairs. I knew that the two-ply corrugated devil wouldn’t come to life but just incubate in a mischievous pose, yet it seemed that if I stared long enough he would step out of the frame with glowing yellow eyes and chase me under the covers, where I felt safest.

One night in my mid-teens, I was under the covers in my sister’s bedroom, deep asleep, while flames spread from a nearby candle. I woke coughing and saw that a wicker loveseat was engulfed before a thick curtain of smoke blinded me. I choked out a hoarse, punctuated grumble in order to rouse my sister. It sounded nothing like me; rather, it came from the belly of a beast. She was also a deep sleeper and I’m thankful that she woke immediately, because in attempting to speak through the smoke I had used the last of my lung capacity. Voiceless and blinded, we fumbled and flailed, skin slipping like chunks of cheese from our arms. I fainted and she escaped.

By the time my mother found me, I had burned almost sixty percent of my body to the third-degree. I burned to the bone in my right hand, which resulted in gangrene and amputations. My face was mostly disfigured. The first time I looked at myself nude in a full-length mirror, I said, “I look like a monster.” To this day (thirteen years later), when some children encounter me in public, they shriek and hide behind their mothers’ legs.

Before my disfigurement I had only ever heard of burn survivors in movies. Krueger was my first exposure in A Nightmare on Elm Street (1984). His burns are punishment: a product of revenge from the parents of children he has murdered. After Krueger is found not guilty of his crimes, he returns to the boiler room where he would take his victims to die. The outraged parents find him there and set the building on fire, killing him. None of this is evidenced through plot but offered as back story tucked inside a dialogue between parent and child. Before this scene, which occurs more than halfway through the film, the reasons for Krueger’s evildoing is left to the imagination. It’s easy for an audience member to associate his cruelty with his disfigurement.

Krueger is not the only burn survivor represented in films as a villain. In a recent study of 32 English-language films that were made between 1933 and 2017, the Phoenix Society found that 50% of characters whose scars were confirmed or could be assumed to be burns were good but became evil after their injury and 62% sought revenge. Just to name a few from my research: Two-Face from Batman Forever (1995); Peyton Westlake from Darkman (1990); and Cropsy from The Burning (1981). Krueger, however, is the most famous. He played a crucial role in both the shaping of my childhood perception of what it means to burn and in the drama that was—and still is—the task of growing into my second skin. Krueger taught me that a burn survivor is something to be feared and avoided as if one’s life depended on it. Such stigma only intensifies the sense of isolation that follows the touching of flames.

During the first year of my recovery, I moved swiftly through crowded streets and preferred shadowy corners. This way, I could have some measure of control over the facial contortions that occurred in reaction to my appearance. Eventually my knowing that people feared me became a source of empowerment. Last week a new acquaintance waited until I mentioned my burns before saying, “I bet there are many people who make the most stupid and ridiculous comments about your scars.” I responded, “Nobody would dare. They’re too afraid of me.”

The fearfulness of Krueger’s homicidal tendencies was apparently not enough to move audiences; he also had to serve as the embodiment of fear itself. (I think we can all agree that burning is one of the worst imaginable deaths.) And yet his burns were still not enough, so Krueger’s creators threw in knife-fingers for good measure. According to the 2010 documentary Never Sleep Again: The Elm Street Legacy, Krueger’s glove-weapon is supposed to evoke a primitive fear of animals with claws. Robert Englund, the original actor who played Krueger, considers the symbolic benefits of the addition: “The claw extends Freddy. It extends his evil, it extends his anger.” Not all burn survivors are angry thankyouverymuch and the ones who are need no makeshift appendage to express their emotions. All they have to do is stand there and be seen. Being burned is scary enough.

There is seemingly no end to the way that Krueger’s creators capitalized on costume ideas that reinforced his repulsiveness. Filmmaker Wes Craven explains how Krueger’s red and green striped sweater came to him after he read an article about the physical difficulty in seeing the two colors side by side. “I literally made him into a sort of painful optical effect,” says Craven, who is either ignorant of the fact that burn survivors don’t need tacky sweaters to achieve a painful optical effect, or he’s insensitive to our struggle for beauty and sustained face-to-face interactions.

If I seem bitter, it’s because Krueger tells me I should be. Although Krueger’s burns are supplemental to his heinous history, their presence seems to justify his haunting behavior in the film. One looks back on the first scene, wherein he fashions his glove-weapon, with the understanding that maybe Krueger wouldn’t have taken his violence to the next level if he hadn’t been incinerated. This subtext lends itself to the notion that burn survivors should be so full of rage that it’s almost a natural response to transfer their suffering to others. I wonder: when strangers first judge my character, do they assume that pissing me off will lead to their disembowelment? Maybe not, but I’d guess that ever since the film hit box offices people have associated a history of burning with a future of wrath at least on a subconscious level.

How much ethical consideration is given to the crafting of a Hollywood villain? Krueger’s makeup artist relied on a medical textbook in which actual bodies like mine appeared. It seems that horror-industry producers care more about the aesthetic success of a cliché and less about a cliché’s rippling consequences on the collective psyche.

A burn survivor is always a creature in the making. The worse the burn, the more reconstructive surgeries are required for the regaining of function and cosmetic satisfaction. As an acute burn survivor navigates the public eye, they must think of their appearance as both in flux and irreparably hideous. If, when I first examined my scars, I saw myself as a monster, then that is due in part to the revulsion that A Nightmare on Elm Street suggests people should experience in response to burns. Look for yourself at the number of cases in which child burn survivors are taunted by bullies with Krueger’s name. He branded so many children with a vision of loathing and the disgraceful vocabulary to describe it. It is no wonder why burn survivors were so offended after the film’s release; a bad reputation is everlasting.

I won’t pretend that Krueger was the first example to teach that fire and enemies should go together. One glance at history will remind us that burning is reserved for individuals whose actions undermine collective power and safety (e.g. Joan of Arc, victims of the Salem witch trials, and other heretics who were burned at the stake). It’s not Krueger’s fault that in the deep seat of our minds there forms the vivid picture of a mob carrying torches to the homes of unwanted anomalies. An adversarial stance toward the disfigured is practically an evolutionary response: we are biologically programmed, for the survival of our species, to gravitate toward the beautiful and to banish the ugly. As long as there have been stories, the beautiful has been paired with the good and ugly with evil. Even if the film and its sequels could be magically erased, the psychological foundations for the creation of an icon like Krueger would remain firmly in place. My complaints are ash in the wind. It feels good to scatter them.

As I got older I felt increasingly silly for running past my brother’s door, so I would pause for a moment and test the cardboard fiend daringly. If my eyes didn’t play tricks on me—casting a shimmer along his stainless steel knuckles—I would grow brave and inch into the dark. I would make it right up to the fibers in his red and green striped sweater, reach my trembling fingers around his flat waist, and pull back and forth to ensure he was fake. Once, the display tipped over on me and I fled screaming. Right now I’d gladly go back and let that two-dimensional fool lie on me. Oh Freddy, I’d say. I know you’re not real. You weigh practically nothing.

Dina Peone is a native of Saugerties, New York and a graduate of the University of Iowa’s Nonfiction Writing Program. She is at work on a memoir about her transmutation by fire.