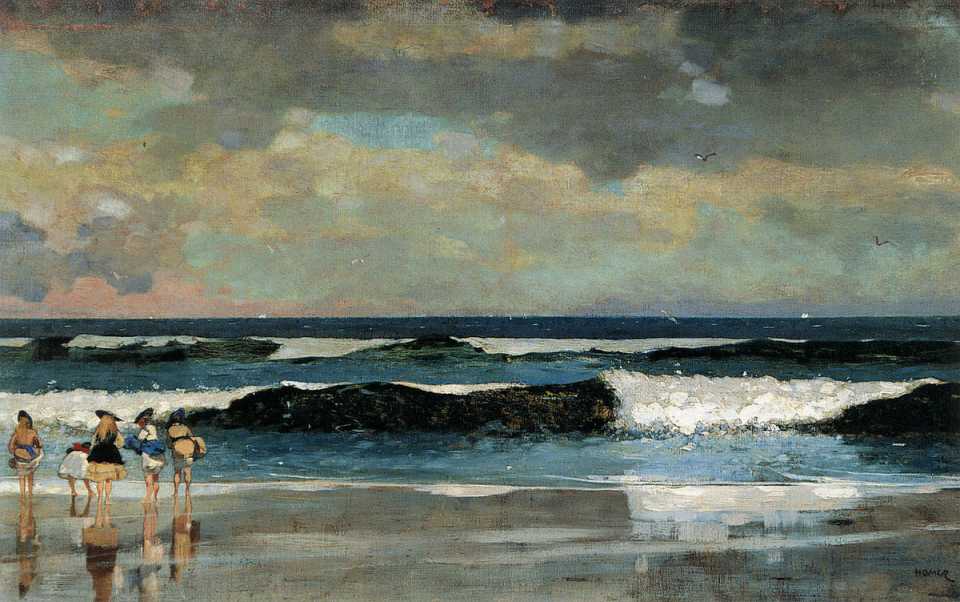 She was eight and at the beach and she felt like a movie star. Her jumper was as bright as a Lifesaver, falling well above her knees, with inch-wide shoulder straps. She played catch with her sister but she was the movie star. Her straps slid pleasantly back and forth as she dove for the ball. Before going to the beach, they bought it at the drugstore, the ball, along with things like her father’s film and the Juicyfruit gum that would slide out of the pack and to the bottom of her mother’s purse. She was sure her mother knew when she snuck the flat, foil-wrapped sticks from between the pennies and loose cigarettes. The gum never tasted only sweet. It always had tobacco flakes in it.

The sand between her toes felt scratchy, a grown-up feeling, like magazines intimated it would feel when she was older and would do something called fix those unsightly heels. She felt beautiful. The air smelled exactly the way air should, like salty ocean water. Like waves crashing. The air held just a touch of suntan lotion. Only little kids wore sunscreen back then. The sunscreen smelled like sunshine. Her father’s fancy camera was focused only on her; she loved the attention, she was beautiful, a movie star, she was sunshine, she was mirth, she was everything they wanted her to be. Her shoulder straps had a round button on them, a big round button. A button.

On her thirty-sixth birthday, he called. That was when she let it in, what he would do with the pictures, once he developed them, would do to his body; and then her hands would tremble, would tremble when she brought back the button and the ocean water and those waves. Those waves, crashing.

Alle C. Hall placed as a finalist for The 2020 Lascaux Prize with a piece that will publish in 2023 as a chapter in her first novel, As Far as You Can Go Before You Have to Come Back. Additionally, Hall won the Richard Hugo House New Works Competition, and is a Best Small Fictions and Best of the Net nominee. Her fiction appears in Evergreen Review, Litro, and Tupelo Quarterly, among others; with essays in Hobart, Creative Nonfiction Magazine, and elsewhere. She is the former Senior Nonfiction Editor at jmww, the former Associate Editor of Vestal Review, and a current reader for Creative Nonfiction Magazine.