The Company of Shallow Holes 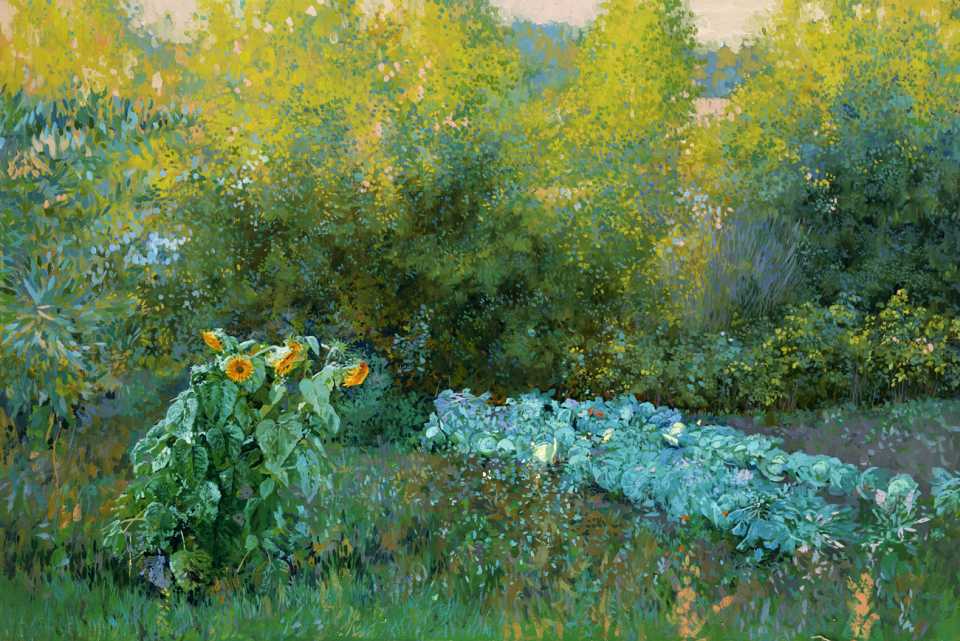 One unremarkable March day, a man began puncturing random holes in his withered pasture with a post-hole digger. Not deep holes, but shallow, exploratory exhumations, as if testing for integrity, or moisture for some future well.

First, he pockmarked the center of his lot before spiraling outwards from there, ending eight hours later with hundreds of punctures. He was a scoured man: skin and joints far too cragged and knotted for middle age. A man who had gone off to Iraq with a boxer’s bearing in 2004 to drive tanks, only to return pummeled and slumped by crusade.

Years later, he became known only as the neighborhood hermit. No wife, no children, no callers stopping by. Every other morning, come 9am, he would drive his rust-beaten hydrostatic mower in circles around the yowling dog he kept chained to a barren flagpole in the middle of the yellow crabgrass pasture, blaring drunken, unintelligible inquiries of the animal, of the ground, of the sky.

At night, slouched in a back-porch recliner molting its limp, brown leather, he would sip in silence, glaring askance at the moon, paying the caterwauling dog no heed. The neighbors knew less of the man than they did the animal: Millie, an equally battered cur of some hybrid wolf stock. A wholly neglected beast, howling hunger and isolation in the middle of the night whenever not engaged in her singular entertainment of gnawing at wilting sunflower stalks. Every fifteen minutes, her owner would yell at her from the back porch, or from inside his sagging, cavernous house: NOT MY FAULT! And for a few minutes she would, perhaps expecting him to come and split his forlornness with her as pals might a beer. But he never did, and Millie never failed to remind him of his neglect.

Then, one especially foggy day, Millie was gone. The rope that had moored her to her fifty-square-foot universe sat frayed at the end like a bridesmaid’s spray of baby’s breath.

Shortly thereafter, the man began digging his holes, mumbling as he went; meek, under-the-breath vocalizations with no discernable words, though one woman gardening behind a dried tangle of sumac would later claim to have heard him growl repeatedly “Where is it?” and “Bad intel” through gritted teeth as he plunged oxidized spades into his barren earth, drawing apart the handles with the grunts of a power-lifter, as if trying to split prehistoric wishbones.

By the time he was done, hands blistered and shaking, he had scooped out some two hundred eight-by-twelve-inch craters. That night, he propped up work lights around the four corners of his lot and flared them inwards, then sat squinting from his recliner as if expecting something to climb steaming and wailing from one of the pitch-black cavities.

One dawn, the light blue and the mist stitching between the hillocks, he overturned his mower and hosed down the undercarriage with one hand while the other crabbed over his face, his shoulders hitching as if shrugging off some private interrogation.

The next day, he went out and returned with sacks of dog food. He filled every hole until they mounded over with kibble. For days after, he sat in his recliner, watching the holes and the horizon. At night the pasture came alive with raccoon and opossum chitter, and he would bolt out naked, wading through tracers of fireflies, his drunken shrieks scattering the critters as he wept his apologies to Millie’s pole, and slowly the holes became unearthed anew, albeit by opportune tooth and claw.

Another day, he wandered into the pasture with two large clear bags of tea lights and plunked one into the bottom of each tiny crater. It took hours, some of the initial candles snuffing out in the last of their wax before he could replace them. Tiny cauldrons flickering orange—as if molten metal sloshed within.

He isn’t all there, his neighbors would mutter. Still others would suggest that maybe the war had turned him psycho. No one ever approached him.

One Friday, he ramped the mower onto the bed of his truck, only to return with the bed brimming with fertilizer. He scooped some into each hole, doled in what looked like seeds, then added more fertilizer until the darker soil bumped proud against the gray-brown loam like a smattering of moles across a sallow back.

In two weeks the sprouts crept through, and the man watered throughout, and he watched from his porch, and he drank, and in a couple of months, two hundred perfectly contained sunflower plots were thriving, gazing east.

And still he watched and drank.

The last time anyone saw him alive was some time in summer. One neighbor claimed to have seen him wandering into his forest of sunflowers—by then as tall as the man himself—a bottle held behind him as if clutching the hand of a coquettish sweetheart.

Late fall, as the sunflowers drooped and the cold rehoned the air, a utility worker on his first month home from Kandahar found the man’s body, desiccated amongst his flowers. Inside his house, charts drawn on the floor and walls of every room. Gridded plots of the property superimposed over tanned maps smattered in Arabic towns. Parabolic courses and coordinates. Intricate lists of dates and times he’d mowed and which areas, along with percentages and question marks. Arrows pointing to a variety of holes, adorned with progressively larger question marks. All figures ending in question marks. Numbers dwindling fast as they moved east.

Bewildered and curious, neighbors prodded the worker for more information, but he shared nothing else—not of seeing the man’s body fetaled and hugging a sheaf of sunflower stalks, nor of the dog collar clutched in his hand, severed clean before the buckle.

Dino Parenti is a writer of dark literary and speculative fiction. His short-fiction collection, Dead Reckoning and Other Stories, is now out with Crystal Lake Publishing. He lives in Los Angeles.