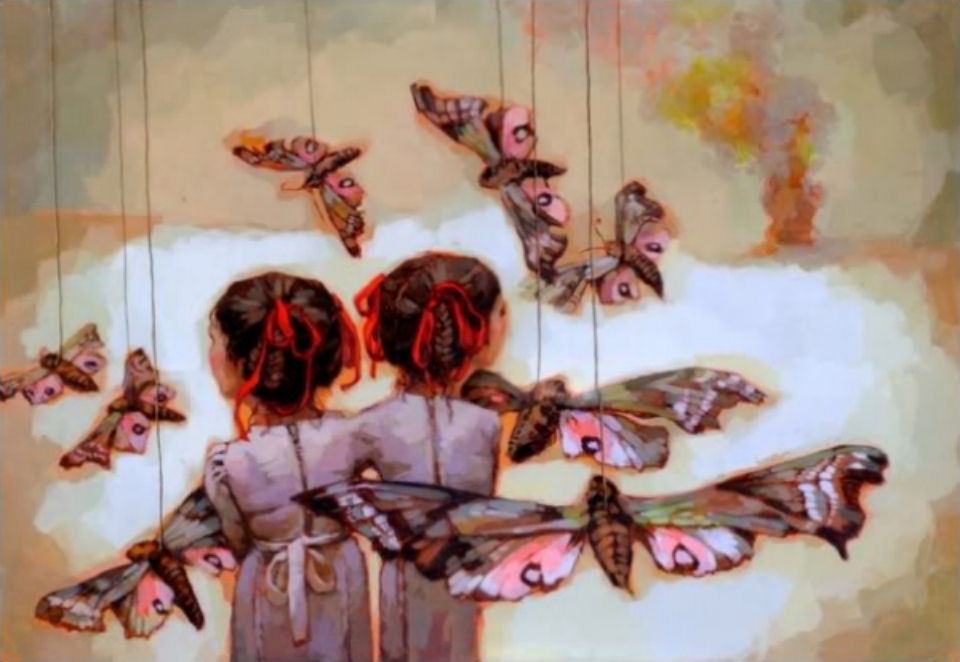 I read an interview with a Buddhist holy man in which he said a miscarriage is a sign that the soul of that baby-to-be had a change of heart, perhaps was not ready to be reborn. Or perhaps chose a different mother.

Of course, for me, always dancing on the precipice of self-doubt as a mom, I took the loss of the baby as a sign I was not chosen. And so November came—the month the baby was to be born, and I took to my bed with an angst-filled heart.

It didn’t help, of course, that my oldest child, in the throes of adolescence, declared me “the most eccentric mother in the universe!” This was why the baby didn’t choose me, I reasoned. I hate to cook. I hate to clean. The stacks of clutter rise from my desk—and the floor around my desk. And the shelves adjacent to my desk. I read a book on anti-cluttering that said to attack your “hot spots” of clutter. I look around, and if hot spots are any indication, my house is on fire.

The laundry spills from the laundry room into the hallway. And then there are the pets. At any given time—depending on species longevity—we have mice, frogs, beta fish, goldfish, cats, and birds. And a hedgehog. And my son’s python. And a rabbit. Named Lola. Who we thought was a girl but turned out to be a boy.

And dogs. Misbehaving dogs that don’t sit on command. And like to eat toilet paper.

And me. At my desk writing when I should be the PTA mom. But PTA moms scare me a little. My house is too loud in addition to being too messy. My friends are incorrigible sorts, not soccer moms. They are writers and artists and other eccentrics, and the kids’ gay uncle who comes over in bunny slippers—I sense a rabbit theme here. Bella’s godmother has purple hair. And there is the cacophony of music—the tuba, piano, violin, cello. And dust bunnies. Along with Lola.

My oldest was right. Eccentric with a capital E. The nights and weeks of insomnia, me writing furiously at 2:00 a.m. then using pots of coffee in daylight hours to barely function as a mother. The distractedness when I am mid-novel. The lack of simply activities of daily living—like showers—when I am on deadline. Who would choose me?

And so I grieved. The miscarriage was early in the pregnancy, but I had already named the baby in my heart. Talked to it. Was so certain this soul chose me. Only it changed its mind.

And I couldn’t blame the baby. Who would choose me?

Months later, though past forty, I decide maybe I will try again. Maybe there was a soul waiting in the Universe who didn’t mind dust bunnies and a messy mother who cannot make macaroni and cheese even out of the blue box. And even if my teen daughter at that moment kind of loathed me, the two other kids sort of liked me, right? Surely, a soul wanted rebirth in my handy little womb.

And on the first try, the little pregnancy stick indicated ding-ding-ding—ladies and gentlemen, we have a baby.

So who chose me?

By age six, the child who chose me was discussing how to hotwire and steal his first car. It’s been years of nonstop mayhem since he entered the world. This child, I suppose now with a Buddhist perspective, chose the mother who would be right for him. Even the pediatrician, when I told her how he hurled a gallon of maple syrup off the second-story landing to see if the plastic container would break open (it did) at age two (!), said, “This child is lucky he has a mother who’s a novelist. Who gets him.”

When he went through his age-three refusal-to-bathe stage, the only way water could touch his skin was by telling him it was a ninja ritual to cleanse himself before battle. I constantly try to outwit his eccentricities. The food that cannot touch the other food. His sensory issues—for a year the only pants he would wear were fuzzy fleece—and if not them, then constant nudity. The day he walked across the street, dropped trou and peed on the nice grandmother’s rose bush. While she stood there watching.

The rotting jars of “experiments”—strange concoctions of food and liquid and for all I know bodily fluids. The time he fed the dog with irritable bowel syndrome Raisin Bran. His worm collection. Including the ones he put on my pillow at bedtime. And in my glass of wine. Congealed worm slime in Chardonnay. The time he wanted to dig up the deceased and buried hedgehog to see if we could reanimate it into a zombie hedgehog. He frightens me. I have to bury pets in the middle of the night so he can’t locate them.

He curses like a sailor (past life?) and mastered the armpit fart by age three. He has taken apart both my vacuum cleaner and the intake system for the air conditioning unit in the time it took me to shower. He likes tools. Power tools. And the collection of leftover nuts and bolts I find in his pockets have me questioning at what point will I sit on something to have it collapse beneath me. He is never getting a chemistry set.

When I ask him what he wants to be when he grows up, he tells me a criminal mastermind or evil ruler of the free world. Complete with minions.

Sometimes, he is so wild and destructive, I simply collapse in a chair and cry.

And then he comes over to me, pushes my now-unruly hair from my face (I pull at my hair so often in frustration, I wonder why I am not bald by this point), and says, “I try to be good, Mommy, but it’s just not in me.”

“I must be the world’s worst mother if I cannot get one little kindergartener to behave and not drop the f-bomb.”

“No. You are the perfect mother. The best one. For me.”

And there it is.

Each November, I light a candle to the baby that changed its mind. I wish its little soul well. I wonder if that baby was reborn into a fine, upstanding family. One with a mother who can cook. A home free of dust bunnies and clutter hot spots. A family that is quiet. With one pet. A dog that sits on command. And my heart aches for just a moment.

And then usually something crashes. And I am screaming the name of the boy who did choose me. I know I have circles under my eyes since his arrival. And my house is messier than ever, with unusual stains in the carpets and crayon murals on the walls.

And I know he found the right womb. The right mother.

Erica Orloff is the author of over 20 novels for adults, young adults, and (as Erica Kirov) middle-grade readers. A native New Yorker, she currently resides in Virginia.