“Oh Jake,” Brett said, “we could have had such a damned good time together.”
“Yes,” I said. “Isn’t it pretty to think so?”
—Ernest Hemingway, The Sun Also Rises 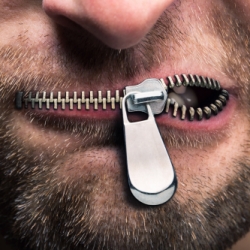 The air pierces your core, cold as a form rejection.

Having funneled the bulk of its funds into comically oversized Writer’s Chronicles, kickbacks for its shadowy cabal board of directors, and the color orange, the Association of Writers & Writing Programs has thirty dollars leftover for its annual conference. Ergo, the thousands-wide nerdle-jerk is forever set in DC or Chicago or Boston, smack in the dead of winter, the spring of our disappointment. (The 2015 conference will take place in Minneapolis. Science: You have one year to develop weather-appropriate gear.)

The proliferation of scarves, specs, pasty skin, and presexual tension gives the Association of Writers & Writing Programs conference a Hogwartsian feel, but with none of the magic. Everyone’s a wizard here, the way everyone in prison is innocent. That smell? Acrid self-importance mingled with sweaty self-consciousness. Self-awareness—by some anti-miracle—is a ghost, a rumor, a wisp of a suburban myth.

That sound? The rumble of foot traffic, the rattle of anthologies.

Nine people died at last year’s bookfair, but the Association of Writers & Writing Programs insists this year’s wider aisles and heightened security measures will make for a safer clusterfuck.

The bookfair is a dream for anyone who’s ever wanted to be catcalled by MFA programs, gawked at by geeks, blinded by laminated badges, and choked by brochures, concurrently. Throng-wise it’s an uncomfortably white Black Friday.

The aisles are ever-shifting, not unlike Hogwarts’ houses. Booths you could’ve sworn were in the north hall turn up in the south, smiling small-press-pushers either creepily unaware or even creepierly aware of their perpetual motion.

The chitchat is so labored, one pays a dear price even for free swag.

The lines at the nightly dances make inebriation a Sisyphan exercise: By the time you get your second drink, you’ve sobered from the first.

Nerds in the know pregame beyond purview. The same way everyone at the conference is either self-important or self-conscious, everyone at the dances is either sober or shitfaced. (In 2006, for reasons its board refuses to divulge, the Association of Writers & Writing Programs outlawed happy mediums.)

Fueled by sauce and Kanye, the bookworms wriggle, they flail. They fling themselves at each other, dart back, fling, return, unsure and uncoordinated despite a bathtub’s worth of gin. Statistically speaking, ninety-five percent of these courtships never even leave the docks, let alone set sail.

The throbbing beats foreshadow tomorrow’s (and the next day’s, and the next’s…) collective migraine, its might amplified by the bookfair’s fluorescent lights, which for financial reasons are powered by hangovers, growing brighter as the week drags on.

Look upon your twerks, ye writey, and despair.

IV. The Panels; or, A Nice Thought

You tortured yourself building The Ideal Itinerary—a mind-expanding, genre-bending schedule so cleanly engineered, the Germans would be proud.

Now take a match to it.

Everyone attends the same three panels at the Association of Writers & Writing Programs conference:

(a) A stuffed-to-the-gills reading headlined by a rising star in the lit-galaxy—the kind of name that elicits titters of recognition in this insulated/infinitesimal pocket of the universe, and Keanu-blank stares everywhere else. Seats here aren’t hard to come by provided you show up halfway through the previous panel, sit on the floor (just out of earshot), and contort your body into the shape of a high-scoring Scrabble letter.

(b) A scholarly discussion helmed by your old grad school professor or mentor, attended by a cluster of reluctant former students and overzealous spouses. Generally the topic is some variation on The Use of Second Person Feminist Satire in the Postmodern Slave Narrative at the Intersection of Queer Theory Minimalist Stream of Consciousness and the Multimedia Immigrant Experience. Those applying to PhD programs should consider this a sizzle reel for the next three years.

(c) One of a hundred or so digital self-promotion panels, which multiply like ticks in New England and translate to The Internet Is This Great Big Thing Where You Can Stick Your Writing. These dialogues are invaluable for anyone still blogging at GeoCities.

Attended panels take place midday. Mornings are for sleeping, evenings for drinking, and no one has ever made it across the long crush of the bookfair before noon.

The keynote address is a unique opportunity for everyone at the Association of Writers & Writing Programs conference to come together in a great hall and nap.

Three years ago Jhumpa Lahiri held forth for five days straight, sans bathroom breaks, a fountain of words but for the dryness. She started reading Wednesday morning—two and a half days ahead of schedule—and continued through Sunday night, vocal chords and janitors be damned.

Her journey began at her parents’ respective conceptions and concluded several generations into the future, with her great-great-grandchildren living in a multiethnic near-utopia where America’s come a long way, yet still has a long way to go. The narrative, per its author, was nonfiction.

There are those who say Lahiri still holds forth in the DC Marriott ballroom, telling her story to anyone who will listen.

I scribble these words on the backs of torn MFA brochures and misplaced Moleskines, on the eleventh floor of the Seattle Sheraton. The time is 4:04 am. The date: Sunday, March 2, 2014.

There are twenty-nine of us here in the hotel room, stacked atop and fitted into each other like Tetris pieces. We wanted to save money on lodging, but the cost has proved catastrophic.

The food—bananas, beef jerky, and Clif bars (we were men, once)—ran out days ago, and the hotel thermostat wasn’t designed to accommodate this much body heat. Whether a result of mechanical malfunction or human fiddling or both, at this point it has only two settings: New Ice Age and Summer in Atlanta.

Tonight it’s stuck on New Ice Age. We’re burning chapbooks for tinder, huddled around them as much as a pile of frostbitten bodies can huddle. I’m not sure where my foot ends and Tom’s head begins, and I don’t want to investigate for fear he’s perished. The things we do to those who perish.

We were so hungry.

Two nights in a row we subsisted on the flesh of the self-published. (The meat is doughy with a hint of delusion, but it will do, it will serve.) We were drunk off networking and Rittenhouse when someone suggested it. Silence, then he or I continued:

“Who would miss them?”

“Really. Who would miss them?”

We dined on a “literary sci-fi” author out of Des Moines that night.

Now the meat and rye have run out, and we’re left with the memories of our atrocities and a few new Twitter followers, none of whom we remember on account of the rye. But while the followers will unfollow, the memories won’t fade. I suppose we still have our words, but they will fail us soon, if they haven’t already.

This isn’t a survival guide; it’s a warning. I only hope it reaches you before—

The air pierces my core, cold as a form rejection.

Evan Allgood’s work has appeared in McSweeney’s, The Millions, Paste, LA Review of Books, Paper Darts, and The Billfold. He lives in Brooklyn. Follow and maybe later unfollow him on Twitter @evoooooooooooo.